Those were the exact words I said to my wife over the phone, just before I boarded my plane from Beijing back to Manila.

It was September 2019. I had visited the headquarters of one of China’s leading investment banks, CICC, and met with its head of research. But what I said had nothing to do with that meeting.

It had nothing to do with my experience in Beijing, either. Getting around in the megacity of 20 million people was easy. Almost everyone I met spoke a bit of English, which helped me get by with my very rusty Mandarin. Beijing had become what Hong Kong was back in the early 2000s… a modern city bustling with activity, day and night.

I also had no idea that in just a few months, air travel would come to a halt because of a global pandemic.

But I was dead serious. It was probably the last time I would set foot in that airport.

You might wonder how I could be so sure. But I knew that Beijing Capital International Airport – where I was standing – would be completely overshadowed later that month.

Mind you, this was the world’s second-busiest airport in 2019, taking care of more than 100 million passengers that year. That made it busier than either Los Angeles International or O’Hare International before the pandemic.

It’s called the Beijing Daxing International Airport. And it’s nothing like any airport you’ve ever seen… 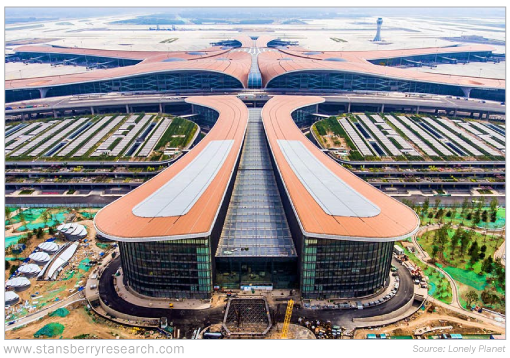 Shaped like a starfish, with a total area of 18 square miles, the airport is massive – almost the size of Manhattan Island. The terminal alone is 7.5 million square feet (about 130 football fields).

It has four runways, with enough space for three more in the future. And it cost nearly $17.5 billion to build. At one point, as many as 40,000 people and 80 tower cranes were working on it.

Plus, a high-speed railway connects the airport to the heart of Beijing… whisking travelers above city traffic at speeds of up to 124 miles per hour.

So, the next time I fly to Beijing, I’ll make sure to go through the Beijing Daxing International Airport.

The amazing thing is that the old airport didn’t close. It’s not being repurposed for military use… or turned into a shipping hub for e-commerce giants like Alibaba (BABA) or JD.com (JD).

You might not realize it, but China has become the world’s second-largest air-travel market…

The country has more than 240 airports servicing commercial flights. And they’re not the monolithic, blocky buildings that you might expect from a communist country.

They’re the complete opposite – modern, gleaming, and bright… just like the brand-new Beijing Daxing International Airport.

That’s because China has been building far more cities than airports. Since 1978, the number of cities in China has exploded from just 193 to 687 as of last year. That’s about 12 new cities per year… compared to about six airports per year over the same time frame.

China knows this is a problem. And it has led to one necessary conclusion… Now, the country is building airports faster than anywhere else in the world.

Simply put, air travel is a major growth industry in China. Tomorrow, I’ll share more of the incredible details that prove it… and why that potential is about to be unlocked.