“You already got two all-cash offers on your house?” I asked my friend Brad a few months back.

Brad is young, in his 20s. He bought his home in 2019. After selling his local business in 2020, he was looking to travel on some of that money.

That’s why he decided to sell that home nearly two years to the day after he bought it. And he locked in an $80,000 profit over his initial purchase price.

It was your basic American home – a three-bedroom, two-bathroom house, with a two-car garage and a fenced-in yard – here in Florida.

Brad didn’t make any renovations to increase the value. That $80,000 gain was pure price appreciation.

The housing market is booming in Florida, where we live. The buying frenzy isn’t unique to our area, though. And surprisingly, it’s actually sustainable…

This cycle of new high after new high is creating a major shift in the current housing boom. Folks are betting that housing prices will continue to soar. And these potential buyers are rushing to get in on the action…

Real estate brokerage firm Redfin released some shocking numbers earlier this year. A massive 63% of offers in 2020 came from buyers who never even visited the home.

Now, some of this was surely due to the “social distancing” brought on by COVID-19… along with the trend of many folks leaving the city centers and moving across the country. But it also tells us a lot about the mindset of these buyers…

It’s a buy-now, ask-questions-later mentality. This is exactly how manias start. It’s the type of craze that leads to multiple cash offers on a normal three-bedroom, two-bathroom home. And it’s what is driving today’s housing market… for the first time in more than a decade.

So what does that mean for us as investors?

We need to assess whether we have legitimate value here, or if housing is in a mania. You see, just because prices have gone up a lot doesn’t mean that housing is no longer affordable.

So it’s critical to keep a close eye on housing affordability. That’s what determines how long the frenzy can last. The current environment in house prices is sustainable as long as mortgage rates are low and folks can afford to buy. But as soon as housing becomes significantly unaffordable, fewer people will buy homes… And prices will start to fall as demand fades. We saw that back in 2006.

Today, fortunately, housing affordability is in a good place…

We can see it through the Housing Affordability Index. It takes into account a typical U.S. family’s income, and it compares that with the current cost of taking out a mortgage.

The higher the number, the easier it is for a typical family to afford a typical home in America. Today, that number remains high – much better than 2006. Take a look… 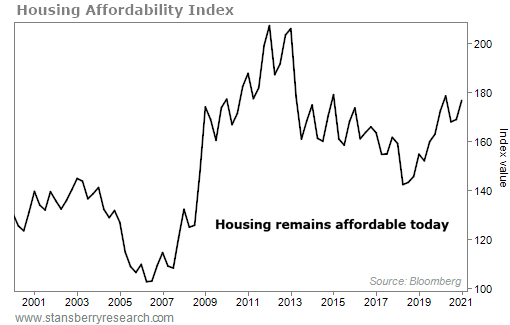 The index starts at 100. That means a typical family can afford to buy the median house in America – in other words, “100%” of a house – at current mortgage rates. At a score of 200, a median-income family has two times the income needed to buy a typical home.

Affordability sits at more than 175 today. This tells us today’s hot real estate market could go much higher from here. But when we see affordability start to fall toward 2006 to 2008 levels in the U.S., that will be a major warning sign that the mania is on its last leg.

The housing market is in a new phase. People are now buying just to bet on price appreciation, which is a bit scary. But it’s not time to sell yet.

This rally could go on as long as affordability is high in the U.S. And we want to be along for the ride – for as long as that’s the case.