The single biggest edge cannabis investors have in 2021 is… they’re early to the show, with the best seats in the house.

Never mind that cannabis is already a perfectly legal $17.5 billion industry in the overwhelming majority of U.S. states and territories and a thriving $4.7 billion business across all of Canada – though, those profits have been great.

The really big profit catalyst is still to come – and it looks to be coming up fast. I’m talking about the Marijuana Opportunity Reinvestment and Expungement (MORE) Act – nothing less than the full federal de-scheduling and decriminalization of cannabis.

At that point, the cannabis sector’s access barriers vanish. Dozens of large-scale U.S. cannabis businesses will be able to freely access the vast, $45 trillion ocean of capital splashing around the New York Stock Exchange and NASDAQ. The $19.1 trillion pension funds will finally be able to purchase U.S. cannabis stocks, and the estimated 20 million Robinhood users out there can trade marijuana stocks all day if they want.

And only the folks with the savvy to be here before this happens will maximize their profits. The triple- and quadruple-digit gains cannabis investors have enjoyed so far are, essentially, just a taste, because the scenario I just spelled out – that is where the serious money is.

But as bullish and fired-up as I am – you can tell, right? – I’ve been seeing some investor activity lately that’s got me a little worried.

Earlier this month, in the wake of a cannabis-bullish move by Amazon.com Inc. (NASDAQ: AMZN), I saw investors grab a few popular, big-name marijuana stocks hand over fist.

While I totally appreciate the “Big Idea” there, the truth is, those investors were flat-out scooping up the wrong cannabis stocks.

In fact, far from striking it rich or being early, I think there’s a real risk with these stocks; I think any short-term profits could turn into long-term underperformance and even losses.

I’m speaking to everyone today, not just National Institute for Cannabis Investors members, because cannabis investors aren’t necessarily the only ones at risk here; these are very, very popular stocks right now in the market at large, not just among folks who’d call themselves “cannabis investors.”

I’m going to list some tickers in a second that you’ll probably recognize – cut ’em loose as soon as you can.

And so as not to leave you high and dry, I’ll name two companies to buy at market today…

Why You Should Sell These Names Right Away

The upshot of Amazon’s big marijuana announcement was A) they’d stop screening job applicants for cannabis use, and B) more significantly, they announced Amazon would be throwing its weight behind advancing the MORE Act I mentioned a second ago.

Now, as we all know, Amazon is one of a couple of companies that can jolt entire markets with a quick press release. With a $1.6 trillion market cap and 798,000 employees in the United States… well, the company’s got a bit of political clout, too.

Investors saw this statement for what it was – bullish for cannabis – and bid those stocks much higher.

Trouble is, those investors were buying up Canadian cannabis stocks…

It’s understandable why the lion’s share of the rally profits went to these three particular stocks.

You’ll notice all those companies are Canadian, yes, but because they’re Canadian, they can trade on the major exchanges – that’s convenient for the crowds of newer, app-based retail investors, because they can’t trade over-the-counter (OTC). But “convenient” doesn’t mean “smart.”

And for now, over-the-counter is the only place the U.S. cannabis gems are found.

So, sell those stocks – do it today, when the market opens if you can. But sell them. There has been and maybe will be the odd opportunity here and there with Canadian marijuana firms…

National Institute for Cannabis Investors member-subscribers got the chance to close out a 346.62% gain on TLRY between March 2020 and February 2021, but for the moment, the big Canadian names are done with growth and, for the foreseeable future, their peaks are behind them.

But in California alone that same year, there were $4.4 billion in sales.

That should tell you all you need to know, that the biggest gains will come to folks who focus on U.S. companies that sell cannabis across multiple states, the so-called “multistate operators,” or MSOs.

So, once your sell order gets filled, pick these high-profit American players up…

Over the next decade in the United States, walking into a dispensary to buy a pack of pre-rolled joints will be just as commonplace as it is right now to go into a liquor store and buy a six-pack of beer.

Curaleaf Holdings Inc. (OTC: CURLF) Chair Boris Jordan knows that, and he has been planning to make sure his company is in the best position to make the most money as the United States is expected to become a $41.5 billion market by 2025.

Curaleaf wants to reach the 93% to 95% of U.S. households that don’t currently consume cannabis. To do that, it plans to eventually become just a processor and manufacturer of cannabis products.

That will cut out the cost of grow operations, and it will also allow the company to focus on its branding to stand out from the crowd… while integrating seamlessly with the mainstream: “We’re making the products much more mainstream for our customer base – we’ll be no different than Coca-Cola or Frito-Lay,” Johnson said in an interview with Forbes.

The company already has operations in 23 states with a total of 106 dispensaries, making it the largest multistate operator (MSO) by dispensaries and operational states. That’s a good start in reaching the 93% to 95% of U.S. households that aren’t currently consuming cannabis.

Even before the MORE Act drops the final domino, Curaleaf will expand even more, both organically and through strategic acquisitions. Curaleaf will make sure it’s everywhere that actual and potential customers may be, just like Starbucks or McDonald’s. Company executives expect to report $1.2 billion in revenue for 2021, which puts it in the running to be the largest cannabis company by sales in the country.

Ayr is a little less well-known than Curaleaf, but it’s quietly working itself into the conversation of being one of the top multistate operators in the United States. It plans to have more than 60 dispensaries open by the end of the year and even now has an addressable customer base of over 73 million people in seven states.

With 42 dispensaries planned to open by the end of 2021 in Florida, as of right now, it will have the second-most dispensaries in the state.

And yes, Florida is an important state. By 2025, New Frontier Data projects the Sunshine State will account for 8% of all U.S. cannabis sales – despite allowing only medical cannabis. 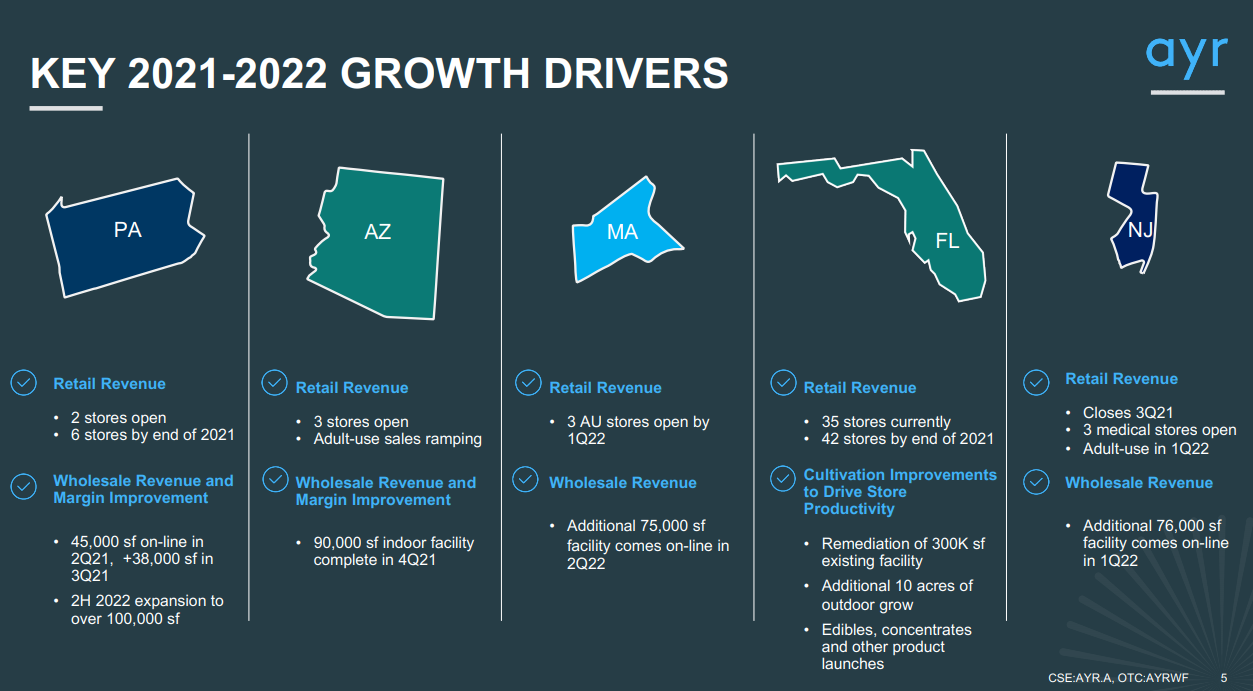 The only state projected to sell more legal cannabis than Florida is – you guessed it – California, but as you can see in this investor presentation slide from Ayr, five states will drive huge amounts of growth in the cannabis sector. Ayr is targeting all of them and more.

The bottom line: The American cannabis sector is where investors will find extreme levels of growth and the profits to match. For now, nothing else comes close.