Healthy companies see their stocks fall all the time because of relatively minor setbacks, like lowering guidance or an executive stepping down. Other times, a business’s prospects may be getting appreciably better or worse.

In both cases, historical context can help you find great value.

If you have a long memory of a company and know its history and management inside and out, it’s a lot easier to swoop in when a great buying opportunity presents itself. Today, I’ll share one example…

I’ve been watching many companies for more than two decades now. One is L Brands (LB). It’s the parent company of lingerie chain Victoria’s Secret and Bath & Body Works, a mall retailer of soaps, candles, and other home fragrance products.

Victoria’s Secret was once considered one of the best specialty retail businesses in the world. It had dominant market share within lingerie in the U.S., near-universal brand recognition, and exceptional, industry-leading margins thanks to both its scale and its pricing power.

After many years at the top of its industry, Victoria’s Secret started to stumble. It saw revenue growth slow down in 2016 and eventually turn negative in 2017. Operating margins started to drop. And the stock began to fall.

Many investors tried to justify the fall from grace…

Some blamed the chain’s troubles on a fashion trend toward “bralettes”… a kind of wireless bra that was taking a bite out of the market for the sexy push-ups that Victoria’s Secret was famous for.

But I could tell that something bigger was going on…

Something was off in the company’s decision-making. For instance, in a move I still don’t understand, Victoria’s Secret exited its swimwear business in 2016.

Victoria’s Secret had been one of the top stores for regular women seeking affordable, full-coverage bikini tops. Women who visited primarily for swimwear every year would also end up buying underwear, sleepwear, or other products. The decision was a huge mistake… and now, five years later, Victoria’s Secret is reentering the category.

Other signs of poor judgment continued, including a lack of diversity in the models selected for advertisements. The millennial and Gen Z customers that the chain sought expected – and demanded – a more inclusive vision of beauty when it came to race and size.

By the end of 2018, Victoria’s Secret was widely lambasted in the press for its out-of-touch marketing. Its overtly sexy imagery and narrow definition of beauty had once felt merely outdated, but suddenly it was regarded as offensive as the #MeToo movement took hold. 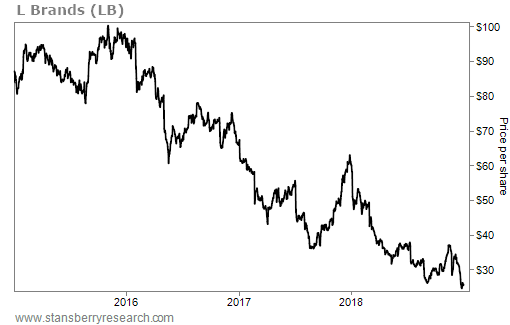 L Brands was a classic value trap all the way down…

People saw the historical margins and thought that problems were temporary. Investors expected a reversion to the mean – that the company would go back to performing as it had for so long.

They figured bralettes would go out of style and push-ups would come back. The next marketing campaign or set of products would turn it all around. My male colleagues (who I assume never wore a bra in their lives) would tell me a life-changing one was just around the corner… because that’s what the company told them.

I remember at one point the declining same-store sales were attributed to dressing rooms that were in desperate need of a refresh, which Victoria’s Secret was in the process of doing.

At that time, a good male friend and analyst sent me into a store to check out one of the new, renovated dressing rooms. While he waited on a rainy street corner for me, I checked out the fitting room. Spoiler: The new wallpaper wasn’t going to fix the company’s problems.

Back when Victoria’s Secret was putting up the peak operating results, it had an exceptional handle on the culture it existed in. I remembered those years well. It knew what women wanted, aspired to be, and believed in. Over time, women’s aspirations changed… but the company didn’t.

And after recognizing that something was broken and avoiding the value trap all the way down, that was when I started getting super excited about the stock as having deep value…

I knew that L Brands’ other asset – Bath & Body Works – was a true gem… And as LB shares continued to sink deeper into the $20s, the perceived value of Victoria’s Secret rapidly approached $0.

Some people thought the chain was beyond repair. But having covered the company for 20 years and having been a customer at different points for 30 years, I felt Victoria’s Secret wasn’t a lost cause.

Bras are one of the toughest apparel categories to size and source properly. Victoria’s Secret still had huge scale and experience advantages. The chain also had excellently placed mall locations, and the continued strong performance of Bath & Body Works – and the sheer number of stores between the two businesses – gave L Brands a lot of sway with landlords.

I also believed in the power of nostalgia in branding… I had seen brands like Tapestry’s (TPR) Coach, Puma (PUM.DE), and Kering’s (KER.PA) Gucci rise from the ashes to periods of high growth and dominance with a change of marketing message or design team. With brands, legacy matters.

My qualitative judgment told me that, if properly managed, Victoria’s Secret was salvageable. My quantitative analysis told me that at points, LB shares implied the lingerie chain was worth nothing – or worse, had negative value, despite nearly $7 billion in annual sales.

Just before the outbreak, L Brands agreed to sell 55% of Victoria’s Secret to private equity firm Sycamore Partners in a deal that valued the company at around $1 billion. I thought it was the steal of the century.

Then COVID-19 hit, and Sycamore walked away from the deal in May.

It was an awful time for retail, not to mention the rest of the world. But nothing had permanently changed at L Brands… And in fact, for the first time, I was seeing a shift in its marketing to be more inclusive and welcoming to diverse customers.

It was at this point that I highlighted L Brands in Empire Financial Daily. I said it was a good buy for long-term investors tolerant of a little volatility.

Having followed the company for so long, I could see subtle “green shoots” at Victoria’s Secret. And I understood what a great business Bath & Body Works is… and how little investors were paying for Victoria’s Secret when you stripped the value of its sister chain out of LB shares, which were trading for just $15 at the time.

As expected, Bath & Body Works has minted money during the pandemic selling soaps and hand sanitizers… and Victoria’s Secret is finally turning things around. Product and marketing improvements have led to “less bad” sales declines while operating margins have exploded.

Things are looking up, and the shares have climbed nearly 300% since the first time I told readers about them… 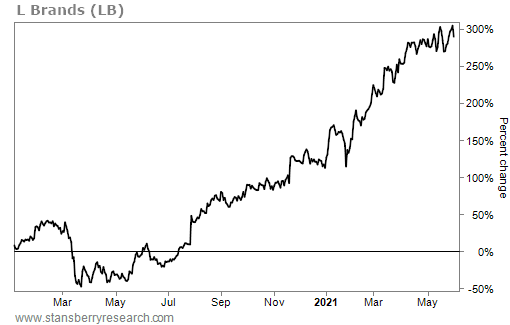 Avoiding the value trap on the way down was hard. Staring into the abyss at the bottom was harder.

But having followed the company over two decades, I had the context and confidence to avoid losses… and to jump in when the stock was ready to rip higher.