DraftKings (NASDAQ:DKNG) has been on my radar for a while, particularly given its high-growth profile. The company is operating in a secular growth environment, while DKNG stock was one of the few stocks to hold up during the high-growth stock selloff earlier this year.

In late February and early March, high-growth stocks were bottoming after a painful rout. Many were down 30% to 50%. Some were down even more than that and there are still plenty that haven’t recovered.

Down about 21% and it’s not as if DKNG stock has gone through the correction unscathed. But it’s considerably better than many of its peers.

When growth stocks started reporting earnings in January and February, we weren’t seeing sustained and robust rallies. Granted, the group had enjoyed months of big gains leading up to earnings. This type of sell-the-news reaction wasn’t all that surprising, but it was a bit disappointing for bulls. Particularly given the aftermath that has followed and especially because many of the higher-quality companies reported very strong results.

However, DKNG stock was one of the few names to experience a strong upside move. Shares rallied 6.5% in the session ahead of earnings, then popped 11.7% in its first post-earnings trading session. That move sent DraftKings to new all-time highs.

So what made the quarter so good? Interestingly, DraftKings actually missed on earnings expectations. However, the company reported $322 million in revenue, roughly $90 million ahead of estimates.

Now I know some of you are thinking, “Big deal — companies top revenue expectations by way more than that all the time. Who cares?”

It’s all relative to size, though. Analysts were expecting about $232 million in sales. DraftKings came in almost 40% ahead of that figure — showing that even the most bullish analysts on Wall Street were too conservative.

Of course, it helps when DraftKings reiterates that its momentum from Q4 was continuing into 2021. Management raised its outlook from $750 million to $850 million in full-year revenue to a new range of $900 million to $1 billion.

For DraftKings to potentially do $1 billion in sales this year is a big shift above where estimates stood just a few months ago. At the start of the year, consensus expectations were closer to $600 million.

The reason why DKNG stock has held up pretty well is obvious: Earnings set the tone. Buyers were willing to step in on the dips with this name because its growth remains so strong. That’s forecast to continue too, so long as the analysts aren’t too conservative again. Estimates call for 66% growth this year to $1.02 billion in sales. In each of the next two years after that, analysts expect 40%-plus growth.

If it comes to fruition, we’re talking about more than $2 billion in revenue in 2023.

The reason I have been so bullish on semiconductors, e-commerce and other key themes has all centered on one catalyst: secular growth.

In short, we’re not looking for a year or two worth of solid growth. We want companies that have years worth of growth due to expanding tangible addressable markets (TAM). We have that with DraftKings after the Supreme Court struck down a 1992 federal law that essentially banned commercial sports betting in most states.

As states push toward legalized sports betting and online wagering, DraftKings continues to add more states to its list. It recently added Michigan, Tennessee and Virginia, three states that will now see a full betting season in 2021.

More legalization is on the way too.

As states are looking for more ways to generate tax revenue, sports gambling will be one of the more immediate ways to tap into those dollars. The trend has been accelerating and should continue through this decade. As more states join the list, the market will continue to expand.

That’s why I’m bullish on DKNG stock and its future.

The Bottom Line on DraftKings 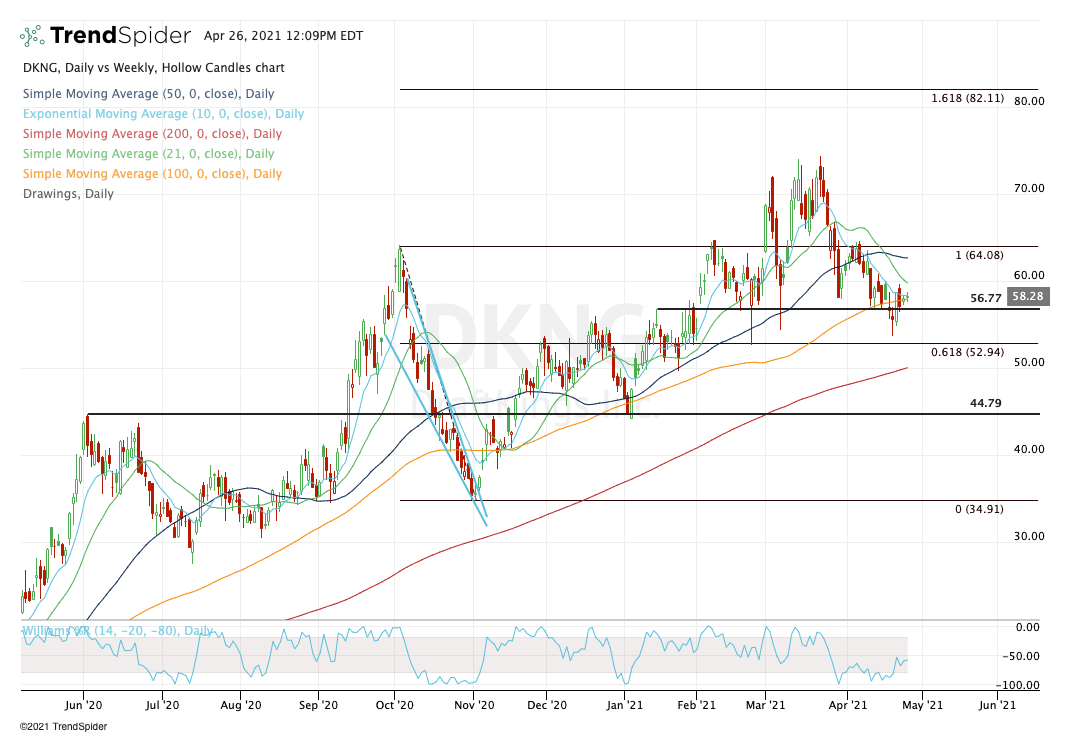 With the novel coronavirus essentially shutting down sports in late Q1 and Q2 2020, DraftKings should see a strong comp period in the first half of the year. Even the second half should be strong, with more states betting on the early parts of the NFL, NCAA Football, NBA and NHL seasons.

With short- and long-term catalysts in play, we’re buyers of the recent dip.

Shares pulled in from their highs near $75, recently dipping down to support near $55. Trying to rebound now, we like scooping up shares of this secular grower on the recent decline.