Luminar Technologies (LAZR) became a publicly traded company in November 2020 through a special purpose acquisition company (SPAC), and rose more than 30% in its debut. Shares eventually surged to a high of $47.80 just 13 trading days after going public, but are now trading in the high teens.

Although it might be too early to tell if shares have bottomed, the steep pullback could be a compelling opportunity to establish small positions in the electric vehicle industry for longer-term investors.

LAZR makes a lidar sensor, which helps give vehicles a three-dimensional view of the road. It is one of the few pure-play options in the electric vehicle industry, which is leading the self-driving revolution.

Some of the companies LAZR is in collaboration with include Volvo, Daimler Truck, and Intel. Moreover, the company is focused on signing large long-term deals and has partnered with 50 companies in total, thus far.

Additionally, the company’s Chief Executive, Austin Russell, said in an interview that LAZR has nine advanced development deals with automakers, meaning the automakers have begun customizing their software to work with the company’s sensors. Volvo’s next-gen electric vehicle, expected to debut in 2022, will likely be the first consumer vehicle to use LAZR’s high-performance lidar technology.

As far as pricing, the company’s sensors cost less than $1,000 per unit while offering very strong performance relative to the price. A savvy selling point for LAZR is that the company claims its lidar technology has an industry-leading viewing range of 250 meters. However, one of the key risks in investing in LAZR at the moment is that the company is not profitable.

Another concerning factor is that LAZR has yet to begin volume production and there could be challenges as it scales up, including competition. The technical outlook doesn’t appear too favorable at the moment, either, after a recent 11-session losing streak. 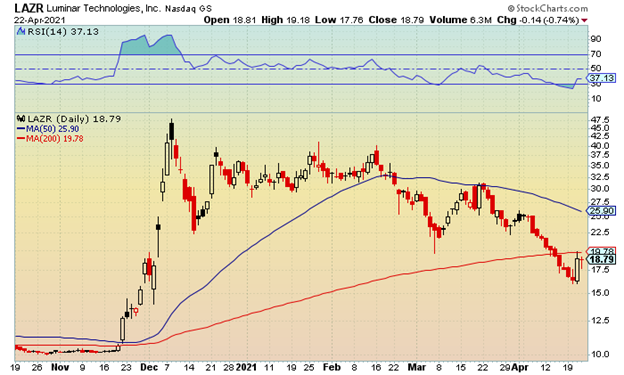 This technical outlook usually signals lower lows down the road. However, continued closes above the $20 level could help the picture to establish a near-term bottom. If not, shares could be headed into the low teens—and perhaps even single digits—despite RSI (relative strength index) signaling slightly oversold conditions.

Given the current setup, shares remain a risk with a better buying opportunity possibly near the $12.50-$10 area. The chart shows $16 holding in back-to-back sessions with a close below this level likely leading to additional selling pressure.

Aggressive and bearish traders can target put options if shares continue to languish below the 200-day moving average. If shares were to fall below $16, the June 15 puts could be a way to play the fade into the low teens and are currently trading for $1.50. If shares tumble towards $12 by mid-June on a break below $16, these options would be $3 in the money for a nice double from current levels.