That is exactly what legendary trader Richard Dennis did. In the early 1970s, he borrowed $1,600 and reportedly made $350 million in about six years.

He earned his fortune speculating in commodities on the Chicago Board of Trade (“CBOT”) exchange, earning him the nickname “Prince of the Pit.”

Dennis was convinced that he could teach his trading skills to anyone. And in the early 1980s, he conducted an experiment of sorts… He would find a group of people to teach his methods to, and then have them trade with real money (his money – that’s how confident he was).

Dennis called his students “turtles” after remembering the turtle farms he had visited in Singapore and thinking he could grow traders as quickly and efficiently as farm-grown turtles. And the famous “Turtle Traders” were born…

It’s a fascinating story… And I won’t cover everything the Turtles did. But what we’re seeing right now in the stock market is absolutely something Dennis and the Turtles would trade. And it’s a setup I want to share with you today…

Dennis’ simple strategy was based on price, moving averages, and breakouts.

This method was 100% based on technical analysis. Once in an interview, he was asked if fundamental trading was dead, and he famously and sarcastically said, “We hope not.” He needed these fundamentalists to trade against.

Now, almost every investor has heard the phrase “Buy low and sell high.”

Well, a lot of the success that Dennis and the Turtles had was from something much different…

You see, the Turtles would wait for a market to break out to a new high and then get into a trade. They kept their entry and exit points simple.

This didn’t work all the time. The Turtles had to endure some large drawdowns along the way. There were also long periods of time where they didn’t trade for weeks or months at a time because the markets they followed weren’t breaking out.

But when markets did break to new highs, the thinking was that a trend was starting, momentum would increase, and this was a low-risk way of making money.

Today, I want to highlight what’s happening in the Nasdaq Composite Index and the S&P 500 Index – and how the Turtles would trade this breakout. 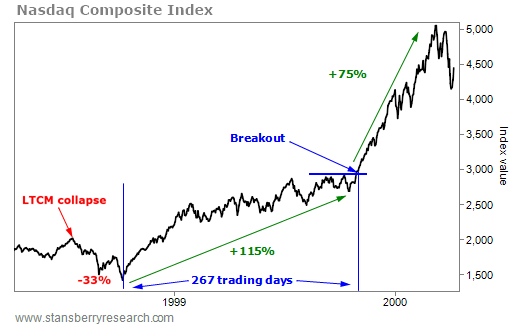 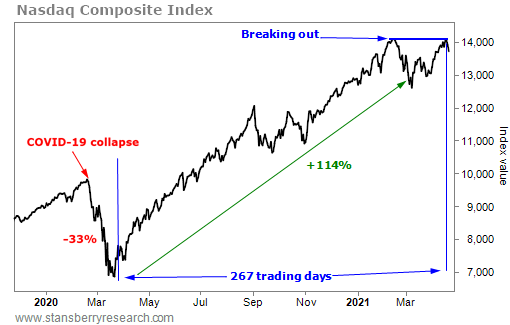 Both time cycles saw a 33% drop after a crisis (in 1998, it was the momentous collapse of hedge fund Long-Term Capital Management). Then, both time cycles had a nearly identical 115% rally before a correction, and around the 267th trading day, both broke to new highs.

In 1999, the market rallied 75% from this breakout point. The jury is out on the market in 2021, but the price action last week was just as strong.

This is exactly the kind of breakout that the Turtles would look for – a sign we could see momentum pick up sharply. The moves in time and price are too similar to each other to ignore.

However, we need to be cautious, because this isn’t the only potential outcome. Take a look at the Nasdaq’s rally from its major low in 2009… 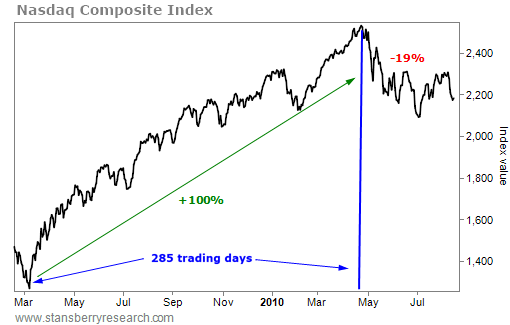 This is where it gets interesting…

As some of you might know, I have been expecting a market turning point around May 10. Guess what date is 285 trading days from the COVID-crash low on March 23, 2020?

So on this date, we could either see a continuation and breakout like 1999, or, like in 2009, the start of a larger correction…

So how do we account for these two time cycles? One says the market is going to break out, and the other suggests a sharp correction could be unfolding soon.

This is where the Turtles come in. I believe they would make some specific moves in a case like this… while keeping it simple. And it could serve as a basic model for what to expect next.

Let’s look at the S&P 500 for a moment. It has already made several new highs after breaking out back in March, and this will be the index to focus on in terms of support levels to watch… 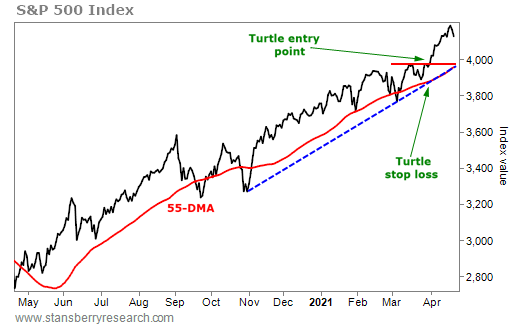 The breakout above the horizontal red line would have been the signal for the Turtles to enter a trade. (We bought in my Ten Stock Trader newsletter as well, back on March 11.) The stop loss for this trade would have been a close below 3,850.

Why this level? A few reasons… First, this is the swing low prior to the breakout, which is an important move in the market and a clear inflection point. But also, the 55-day moving average (55-DMA) shown above in red – which is a way to measure the trend, and which has acted as support here for a while – is near this level as well.

The breakout level near 3,985 is what will matter the most heading into May, especially around May 10… which again would mark the important time cycle that matches 2009, if there is a top coming.

Now, I won’t speculate on whether that’s likely today. The trend is up, fiscal and monetary support are still in play, and the 1999 time cycle in the Nasdaq is too exact for me to ignore.

But if the market is set to follow the 2009 script, we have a good idea of when that will be and how far the correction could go.

It’s always good to know where things could go wrong…

For now, I’m staying with the breakout and keeping it simple until proven otherwise… Just like a Turtle would.

A New Opportunity in a Winning Sector: Capture a 5% Yield to Maturity

The Current Housing Boom IS Sustainable

3 Stocks That Could Be Tomorrow’s Dividend Aristocrats

Upgrades and Downgrades for Thursday, 9/16

This Top Dividend Stock is Selling at a 15% Discount