I recently had a regular follower of my work ask me to analyze Nexstar Media Group, Inc. (NXST) a stock that I frankly had never looked at before. However, once I began evaluating this small/mid-cap company, I became intrigued about its possibilities as both a pure growth stock and a dividend growth stock.

Consequently, I thought I would share this finding and perhaps encourage any readers familiar with it to participate in my ongoing research and due diligence process.

Nevertheless, from what I have seen so far, I am very seriously considering adding this company to both my growth and dividend growth research candidate lists because I am intrigued by its yield, growth potential and its low current valuation.

Nexstar Media Group, Inc. is America’s largest local television and media company. They have 198 total stations that reach 62% of the US households. They also host 120 local websites and 284 mobile apps that all operate in 116 television markets.

Chairman and CEO, Perry A. Sook founded the company in 1996 with the purchase of the Scranton Pennsylvania television station WYOU. From these early beginnings he has built the business into the largest of its kind in the United States. In 2003 the company went public, which was just after acquiring Quorum Broadcasting and other stations that doubled Nexstar’s station portfolio.

In 2005 Nexstar created a new type of relationship by requesting payment TV services for retransmission of local programming. According to Morningstar:

“retransmission revenue has grown rapidly as a source of revenue for local television stations. If a pay-TV distributor like Comcast or Dish Network wants to carry one of the four broadcast networks in a specific market, it must retransmit the local station feed for that market. For Nexstar, retrans revenue was 45% of total 2019 revenue, up from 25% in 2014. While the growth in retrans revenue has been and will continue to be a growth driver for local station owners, we project that national network owners will continue to raise both network affiliation fees and reverse compensation fees, decreasing the bottom-line benefit to Nexstar.”

According to Zacks Investment Research: Nexstar Broadcasting Group currently owns, operates, programs, or provides sales and other services to television stations in the states of Illinois, Indiana, Maryland, Missouri, Montana, Texas, Pennsylvania, Louisiana, Arkansas, Alabama and New York. Nexstar’s television station group includes affiliates of NBC, CBS, ABC, FOX and UPN. As a result, the Nexstar has networks in 15 of the top 20 television markets in the United States.

Nexstar By the Numbers

Before I get to all the reasons I am intrigued by this company, I feel it is only fair and appropriate to highlight some of the obvious negatives. For starters, the company has a credit rating of BB which is below investment grade. Additionally, the company is carrying 75% long-term debt to capital. Finally, the company’s recent operating history would be described as moderately cyclical, yet high growth. I will be talking about this more later in the article.

On a more positive note, the company trades at a blended P/E ratio of 8.72 thereby offering an earnings yield of 11.47%, which is exceptional in today’s inflated stock market. Additionally, the company offers a current dividend yield of 1.88% which is slightly above average. However, since the company has initiated its dividend in 2013, it has grown at an average rate of 24.6% which imparted to produce significantly more total dividend income since 2013 than the S&P 500 or average company. 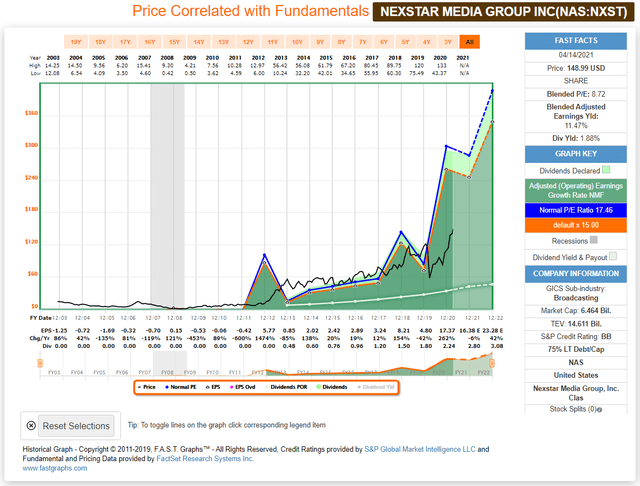 As previously mentioned, Nexstar was founded in 1996 and went public in 2003. However, as seen in the FAST Graph below, the company essentially was not able to generate any meaningful profit through calendar year 2011. However, the company did generate decent cash flows and sales throughout this timeframe. 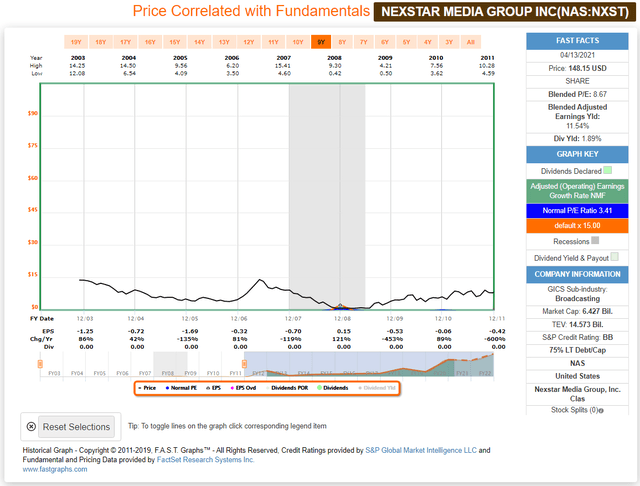 Poor earnings achievements over the timeframe 2003-2011 translated into negative shareholder performance. The company paid no dividends over this timeframe, and a $10,000 original investment would have fallen to only $5,689, representing a -6.7% annualized loss.

Once Nexstar turned profitable, it was able to grow earnings at a high rate of 14.97% from 2013 to current. However, note how earnings exploded as they grew by 262% in 2019 resulting from the company’s merger with Tribune. This merger made Nexstar the top broadcast affiliate for both Fox and CBS, as well as the number 2 partner for NBC and number 3 for ABC. This recent explosion in growth is what has gotten me most interested in learning more about this intriguing broadcasting business. 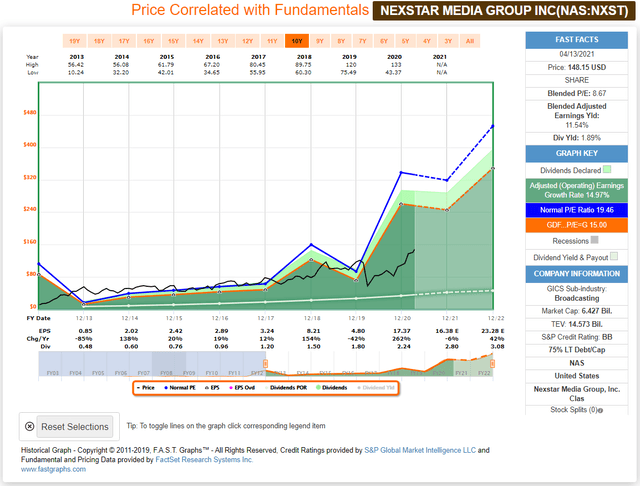 In addition to earnings growth, sales also exploded in recent years and the company currently trades at one of its lowest price to sales in its operating history. This is simply another indicator of the very attractive valuation this company can be purchased at, which in my opinion significantly reduces the risk. In other words, the company’s current lack of quality characteristics are made up by the attractive price. Therefore, I consider this a very interesting and potentially profitable speculation.

Also, despite Nexstar trading at such a low current valuation, performance since December 31, 2012 has been extraordinary. The company has produced significantly more dividend income, $9,008.52 versus only $2273.76 from an equal investment in the S&P 500 over the same timeframe. But perhaps even more exciting is the fact that it has additionally generated a 37.5% annualized rate of return without dividends. Total return of capital appreciation plus dividend equals a 38.5% total annualized rate of return, turning $10,000 invested on December 31, 2012 into $148,905.08 through yesterday’s close. 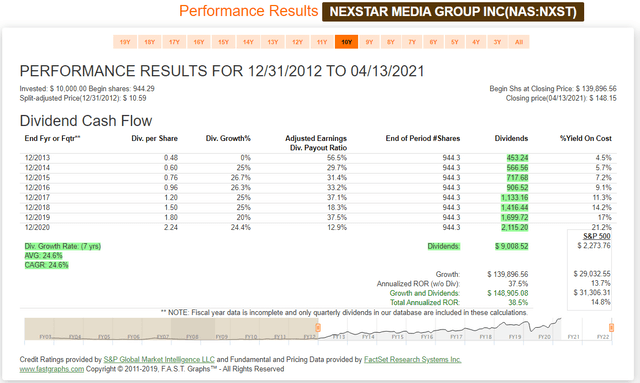 After Nexstar’s last financial release, Richie Capital Group reported in their 1st quarter 2021 investment letter that resulting from the full integration of the Tribune Media acquisition, that Nexstar grew their free cash flow by 367%. Currently, Nexstar offers a free cash flow yield of 15.36% with an estimated dividend free cash flow payout ratio of a mere 11%.

Consequently, Nexstar’s dividend is extremely well covered into the foreseeable future. Considering how fast the dividend has grown since they initiated one in 2013, Nexstar looks like a classic and very attractively valued dividend growth stock. Therefore, it is no wonder that Goldman Sachs – in an article published in Barron’s on March 21, 2021 – listed Nexstar as 1 of their 9 sensible stock picks for this strange market. 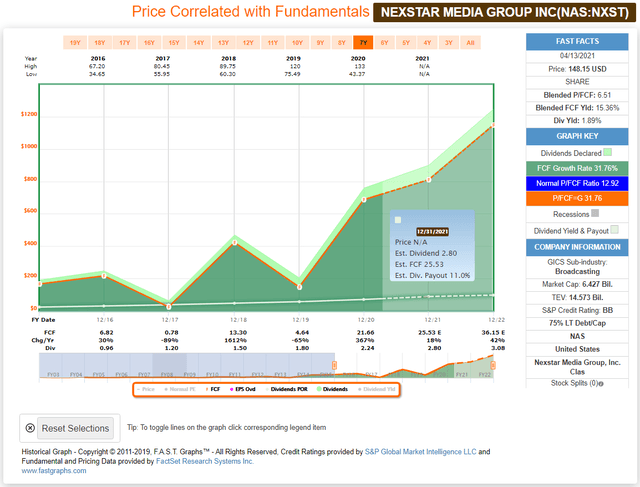 A short-term negative that investors might want to consider is that the consensus of 9 leading analysts following the company expect earnings to be down 6% in fiscal year ending December 31, 2021. However, on the bright side, analyst estimates have increased significantly from both 2021 and 2022 fiscal years over the past 6 months.

Consequently, analysts appear to be getting more positive and sanguine regarding this company’s prospects. If the company were to achieve the earnings growth expectations and simply traded at a market average P/E ratio of 15 by fiscal year-end 2022, investors could stand to make an annualized rate of return in excess of 65% per annum – more than doubling their money over that timeframe. 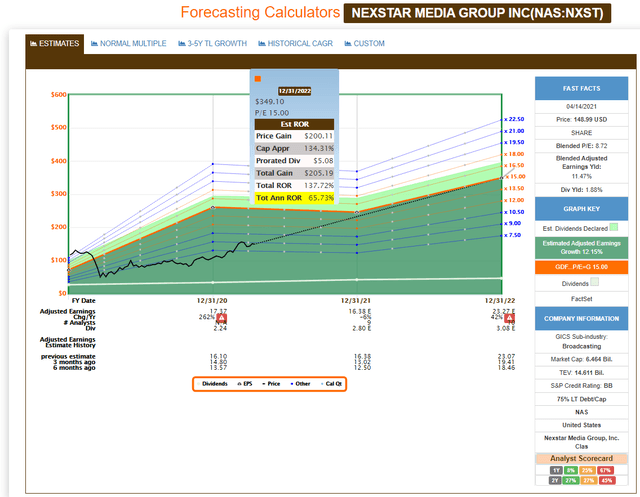 I believe that Nexstar currently represents a very intriguing and undervalued growth and dividend growth stock. However, as I pointed out earlier, the company’s credit rating is below investment grade and the company does have a lot of debt.

Additionally, Morningstar warns that there are several specific risks that could inhibit Nexstar’s revenue growth, and therefore, they view it as a high uncertainty company. Although I do not totally disagree with that possibility, I do believe that the risk reward ratio is well worth it. There is risk, but the rewards for success in this case would be extraordinary and therefore potentially worth taking. With that said, I still have work to do, but I am very intrigued and anxious to learn more.