Shares of Tencent Music Entertainment Group (TME) recently plunged 50% from their all-time high of $32.25, to an intraday low of $16.31 following liquidation by a major hedge fund. Specifically, Archegos Capital Management was forced to unload a number of the positions it held following a margin call.

Goldman Sachs, Morgan Stanley, Credit Suisse, and Deutsche Bank all forced Archegos to liquidate shares of Tencent Music Entertainment Group and other Chinese internet businesses in its portfolio through unregistered trades. The catalyst for the selling pressure came after ViacomCBS (VIAC) and a $3 billion stock offering through Morgan Stanley and J.P. Morgan fell apart.

Following the recent volatility, TME announced its board of directors had authorized a share repurchase program, under which the company may repurchase up to $1 billion of its stock during a twelve-month period, commencing immediately.

Following the earnings announcement, and before the steep selloff, one analyst raised their firm’s price target on TME to $36 from $18, while keeping a buy rating on the stock. The analyst noted total revenue should grow nearly 20% year over year in 2021 and expects the company to invest in a number of initiatives across existing and new businesses.

During its fourth-quarter earnings call, Tencent Music Entertainment Group said its paying online music users reached 56 million, up more than 40% from the previous year. Moreover, the company is adding five million users each month at its current rate and is quickly transforming into an all-in-one online music and audio entertainment platform in China.

The chart below shows key support at the $20 level with the possibility of a retest towards $19-$18.50 and the 200-day moving average on continued weakness. Key resistance is at $22. This level also represents a key breakout level from January before a two-session surge towards $29. 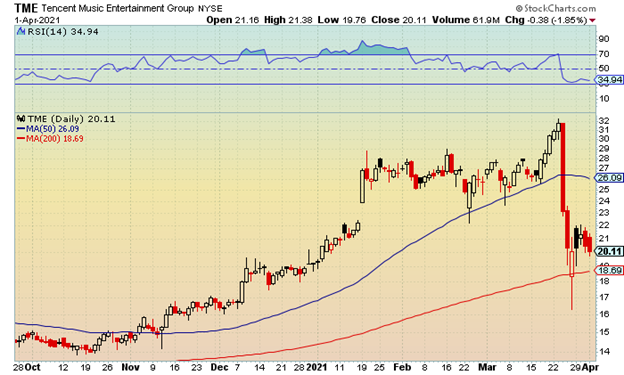 TME shares are currently oversold with relative strength index (RSI) near the 30 level. However, in March of 2020, RSI tested the 20 area. If shares fall back below the 200-day moving average, selling pressure could return, with RSI once again falling below 30 and risk in the share price towards $17-$16 (the prior March low was $16.31). From there, traders would need to see if a “double bottom” holds for the possibility of a great entry point to get long the stock.

Aggressive traders can wait for shares to clear $22 before looking at call options. The TME July 22 call options are currently trading just south of $2 per contract. If shares can break above the $22 level and make another run past $26, these call options would easily double from current levels as they would be $4 in the money.