In September, I covered the stock and assigned its then-16% yield a “D” rating for dividend safety.

In the article, I pointed out that the company’s net income is often negative, as was its most recent six months of EBITDA (earnings before interest, taxes, depreciation and amortization), a watered-down measure of cash flow.

Normally, I analyze a company’s cash flow to determine dividend safety, but Icahn Enterprises reports only net income attributable to the company and EBITDA.

And frankly, the numbers aren’t great.

Net income has been negative for the past three years. While it’s expected to be positive in 2021, the projected $81 million in profits will hardly be enough to pay the dividend. Last year, Icahn Enterprises paid out $526 million. 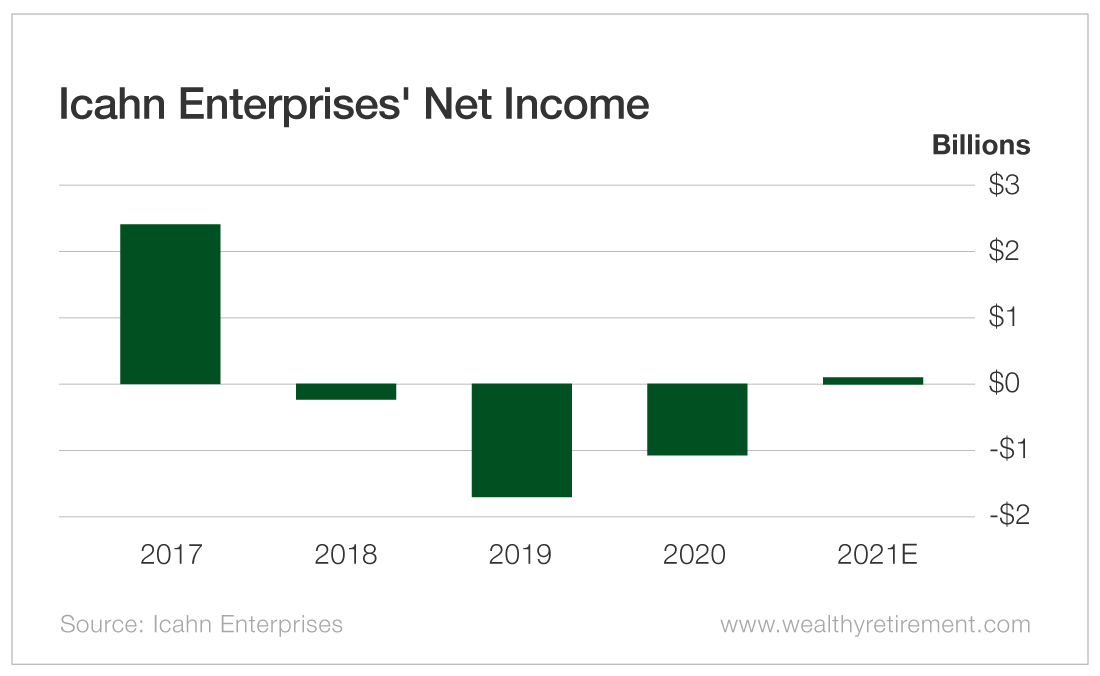 Keep in mind, Icahn makes investments in businesses and takes profits on the investments from time to time. It’s not the kind of business that has steady income coming into it. A big windfall may occur one year and not the next.

I get that, and I’m not commenting on the stock’s price or potential.

But I question its ability to afford the dividend it’s paying.

The company pays $2 per share quarterly. At the stock’s current price, that comes out to a 15% yield.

Icahn Enterprises’ dividend-paying track record is mixed. It has raised the dividend four times since 2013. However, it slashed it by 80% in 2011 and then eliminated it entirely for all of 2012 before picking it back up in the first quarter of 2013.

Considering Icahn Enterprises can’t really afford the current dividend, and considering that the yield is sky-high, I expect the company to cut the dividend in the next 12 months.

After all, it could slice it in half and still pay a juicy 7.5% yield, which would satisfy most shareholders.