If we were going to create a Mount Rushmore of investors, no doubt Warren Buffett would be on it.

I’d put Jim Simons – the brilliant quant investor who started Renaissance Technologies, one of the most successful hedge funds in history – on it as well.

I’m not sure whether Carl Icahn would be on it or not, but he’d be mentioned in the conversation.

Icahn is the chairman of Icahn Enterprises (Nasdaq: IEP), a master limited partnership (MLP) that invests in the energy, real estate and automotive sectors, among others.

The company recently declared a $2 per unit distribution (MLPs’ form of a dividend). That comes out to a whopping 16% yield. But can Icahn continue to pay shareholders that steep of a yield?

Net income isn’t the best metric to measure dividend safety. But it’s what this company reports, so that’s what we have to use.

In 2019, net income attributable to the company was negative $1.1 billion. It was also negative in the first six months of this year.

EBITDA (earnings before interest, taxes, depreciation and amortization), which is considered a watered-down version of cash flow, was also negative in the first six months.

With these numbers, of course Icahn Enterprises’ payout ratio is a negative number. That means the company has to raise money from debt or dip into cash to pay the distribution.

Next year, earnings are expected to improve but still be negative.

This is not unusual for Icahn Enterprises. Since 2016, net income has been positive only twice.

Yet, the company has a solid recent distribution-paying track record. 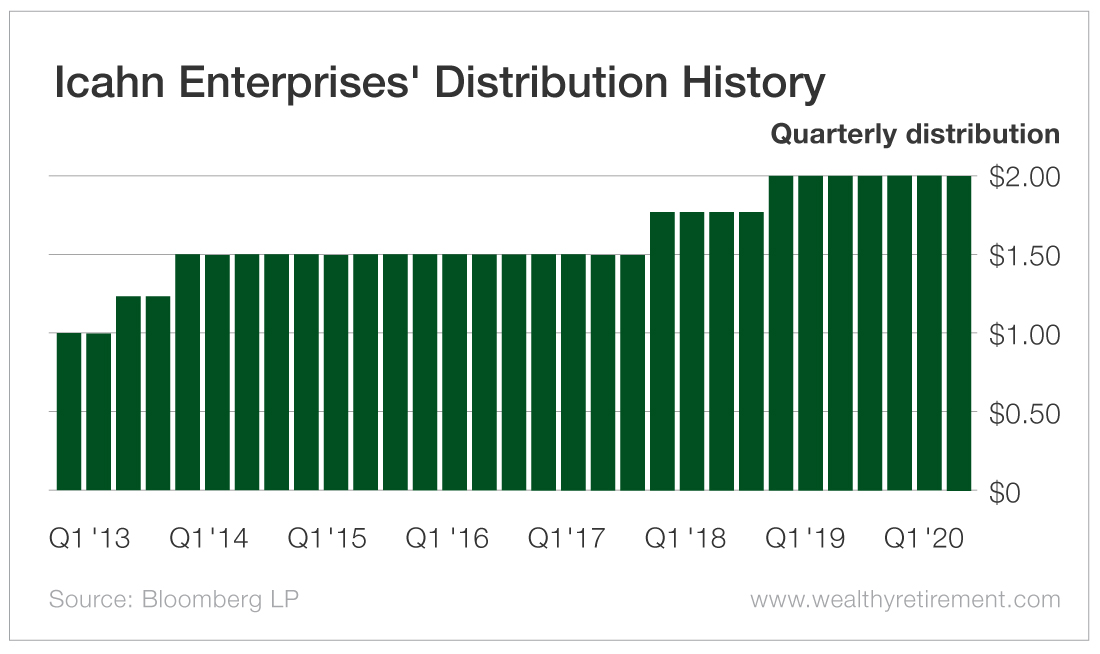 In recent years, management has shown a commitment to the distribution, but the financials don’t support it. Management could easily cut the distribution in half and still pay a generous 8% yield that would be better than most dividend payers’ payouts.