Over the past couple of decades, we’ve witnessed disrupters completely reshape industries.

Facebook (Nasdaq: FB) and Twitter (NYSE: TWTR) launched new ways for humans to communicate and interact. Social media is now one of the most powerful advertising platforms in the world.

The streaming service Netflix (Nasdaq: NFLX) not only created a model that dozens of other companies now emulate but also produces some of the best content out there. The studio receives scores of Oscar and Golden Globe nominations and awards each year.

Uber (NYSE: UBER) and Lyft (Nasdaq: LYFT) have flipped the ride-hailing industry on its head. In fact, long-coveted taxi medallions in New York and other cities have plummeted in value.

E-commerce giants Alibaba (NYSE: BABA) and Amazon (Nasdaq: AMZN) are the templates that the whole retail industry looks to replicate.

And in finance, there’s Bitcoin and the cryptocurrency ecosystem. Not to mention the potential for blockchain.

Many early investors in each of these disrupters have been rewarded with life-changing returns. But there’s a new disrupter about to go public. And, like Uber and Lyft, it plans to reshape the way we travel for decades to come.

A Transportation Stock for the Next Decade

With the arrival of the new millennium, one of the biggest disappointments for many of us was the lack of flying cars.

In elementary school, I was promised a future of flying cars and autonomous vehicles. Not to mention a healthy dose of robots.

Don’t get me wrong. These things exist. Just not in the numbers we imagined they would be by now.

And though flying cars will soon be commercially available, they carry a price tag most can’t afford. But Joby Aviation is hoping to bring some of this sci-fi magic to millions of commuters.

Over the past 10 years, the company has developed a zero-emission, all-electric, vertical takeoff and landing (eVTOL) aircraft designed to leapfrog traffic congestion.

Each aircraft will carry one pilot and four passengers for journeys of anywhere from 5 to 150 miles at a top speed of 200 mph.

These are the taxis of the future. The next evolution in ride-hailing after Uber and Lyft. In fact, Uber was working on this idea but sold its segment to Joby in December. And it agreed to make a $75 million investment in the company.

The company’s goal is to save 1 billion people an hour of commute time each day and to accomplish this in an environmentally friendly way.

Joby plans to have commercial passenger aircraft in operation as early as 2024.

And once these are up and running, its business will, literally, take off. 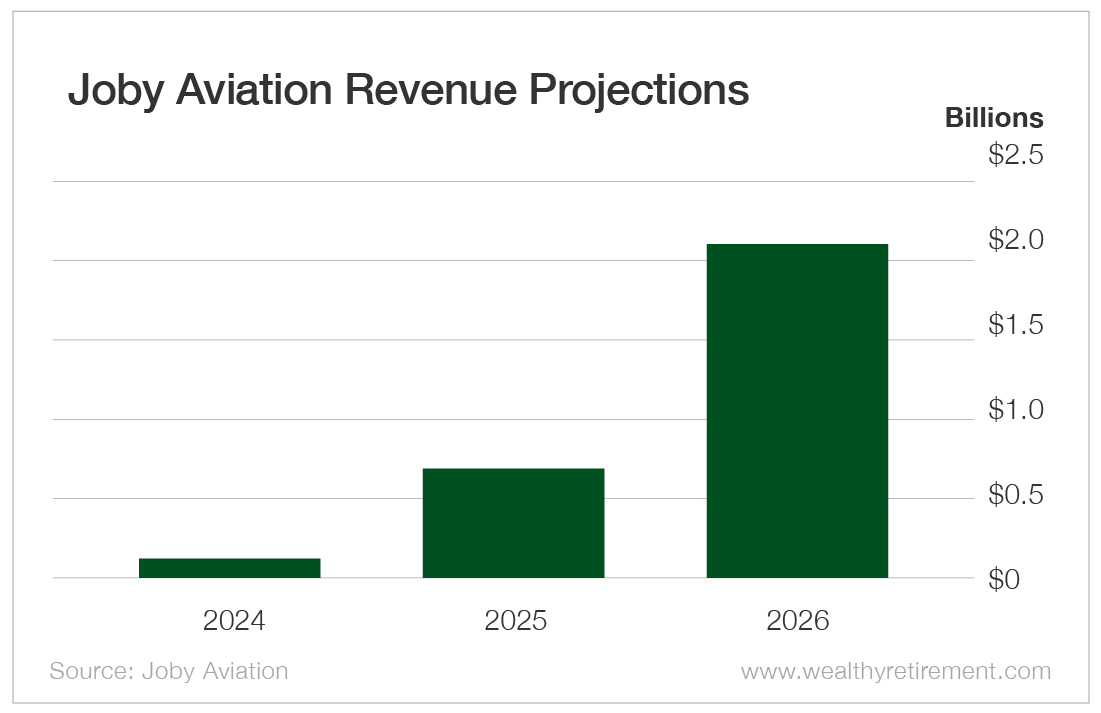 The company forecasts it will make $721 million in revenue by 2025. And it projects that number will more than double by 2026.

By then, the company believes each aircraft will generate $2.2 million in annual revenue with roughly 850 planes in service.

Over the next decade, Joby plans to have a total of roughly 14,000 vehicles generating $20 billion in revenue. It expects to have a presence in at least 20 cities worldwide, with recurring revenue from its aircraft segment accounting for more than 50% of annual sales.

These are lofty forecasts. But Joby is further ahead than its competitors are.

A $1 Trillion Opportunity Starting at $10

Several companies are racing to be the first eVTOL taxi on the market.

But Joby is a very intriguing opportunity.

Not to mention, it has a real advantage with the investments from Toyota and Uber. And Toyota is the company’s strategic partner for production of its aircraft, which will begin later this year.

Plus, investors will be able to get a piece of the action, as Joby will go public through a merger with the special purpose acquisition company (SPAC) Reinvent Technology Partners (NYSE: RTP).

This deal values the company at $6.6 billion. That seems steep considering there is no real revenue yet. But the opportunity for the air mobility market is upward of $500 billion in the U.S. Globally, this opportunity is forecast to top $1 trillion.

Shares of the Reinvent Technology SPAC are trading for just around $10. That’s a cheap entry into this sizable market.

Joby is looking to revolutionize how we travel. It plans to be the next great disrupter for the next decade.

Its market won’t take off for a couple of years. But Joby Aviation is definitely a company I believe investors should have on their radar right now.