We may be closing in on a short-term market top.

One that could shave anywhere from 10-20% from prices… quickly.

And that top could hit as soon as next week.

Because today, I’m going to show you exactly how to prepare for this correction.

Remember, volatility is a trader’s best friend, whether it’s from upside or downside movement.

And as long as you’re watching these two market indicators, then the short-term correction won’t pull the rug out from under your portfolio.

Every trader and investor should be watching these two indicators very closely.

Together, they’re the only way to pinpoint exactly when the market’s next correction will occur – allowing you to call the top – and profit on the downside…

The Top Two Indicators to Predict the Market’s Next Top

Risk-taking and speculation are one of the most important drivers of any bull market trend. This is why I watch the IWM so closely as it is an excellent indicator of whether investors have an appetite for risk.

Last week, the IWM shot into overbought territory – something that it has done a few times over the last quarter – and the market reacted almost immediately.

We saw an “air pocket” pull stocks lower during trading on Wednesday, which was a bit of a warning sign that we may see some additional selling pressure hit the market over the next two weeks as earnings season starts to wind down.

Keep an eye on the $220 level as a price for potential support. A break below this will signal that larger selling is likely to start hitting the market in the short-term. 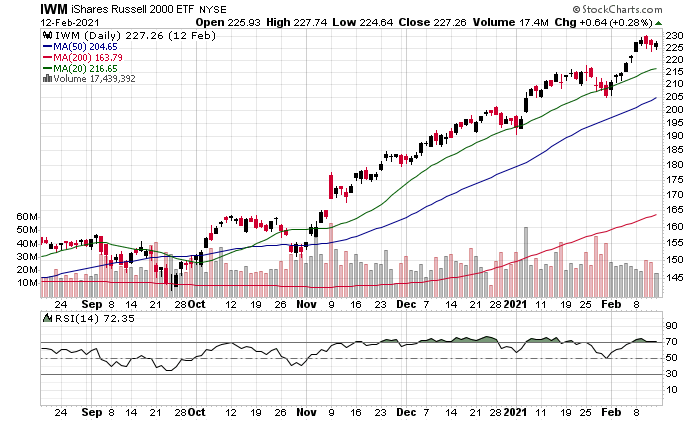 The next indicator you should watch is the CBOE Volatility Index (VIX).

Paired together with the activity in the IWM, the VIX is confirming that the market shudders may lead to a larger pullback and that some hedged positions may be required over the next few weeks (again, something we’ll cover in my market outlook on Tuesday).

The VIX is bouncing between 20 and 22 while showing a propensity to start lurching higher. This is almost always the sign of a market on edge.

Two closes above the 23 level are your official signal to start taking profits and adding protection to your portfolio. 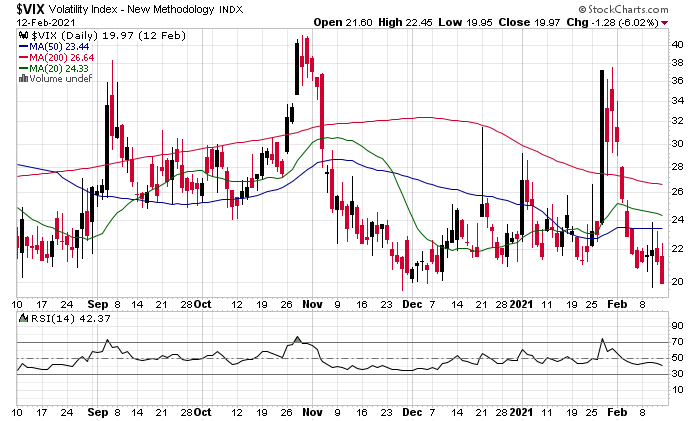 Now, these indicators aren’t the only things you should be watching next week. Here are the top seven stocks to watch as well in my Weekend Watchlist…

As long as we’re talking names to watch, I have to talk about Bitcoin (BTC).

I mean, we can talk about stocks all we want. But nothing has seen the same kind of volatility over the past few weeks at this top cryptocurrency.

The fireworks show surrounding BTC and its expansion into the market continued this week, resulting in new highs for the top coin – and for the Grayscale Bitcoin Trust (GBTC).

This week’s headlines included Tesla’s purchase of BTC in preparation to begin taking the cryptocurrency as a form of payment for their vehicles, as well as the Bank of NY Mellon announcing that they are planning to start accepting and holding the coin for their investment clients.

While many are calling the recent spike in crypto a clear bubble, I have to point out that bubbles happen in phases, and we’re not there yet…

BTC and cryptocurrencies have moved through the “despair” and “disbelief” stages – the first two stages of a market rally – over the last few years after the asset fell hard from its first “bubble.”

Now, the asset is entering the third phase of its rally, the “acceptance” phase. This is the strongest phase of any rally, as it marks the point where the mainstream market adopts and invests in a concept or stock – in this case, crypto.

The acceptance phase usually lasts more than three quarters before the “euphoria” stage begins, which is where almost all long-term market tops are formed.

What this means for GBTC’s recent surge is that we’re likely in the early innings of an extra-innings game. In other words, GBTC is one of those foundational portfolio holdings that my approach dictates should be in almost anyone’s portfolio, as it will likely be a best-in-breed performer in 2021.

It’s not too late to ride this trend to profits. 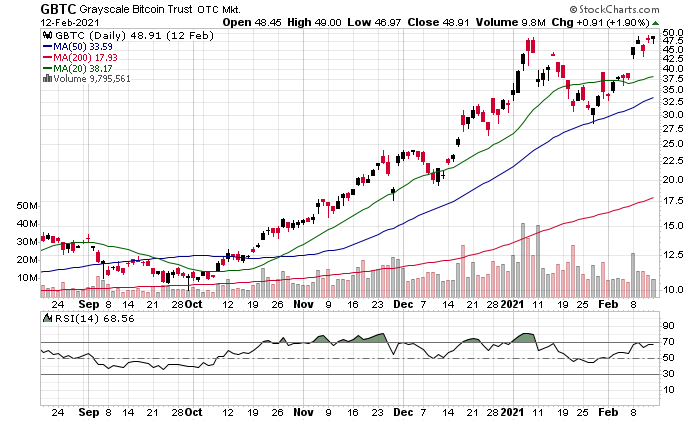 Keep an eye out…

Are These 10 Stocks Ready to Go Up? [sponsor]
Tom Gentile, commonly known as America’s #1 Pattern Trader, has just released the names of 10 stocks that he believes could go up between now and August 16. These stocks have increased in price virtually every time in the last 10 years during the same specific window of time. See the full list here.