That means prices can detach from fundamentals – despite every argument to the contrary. And that can cost investors a lot of money in the process.

Hedge funds have cut their losses, as I’ll explain today.

They’ve reduced their exposure to the stock market. And that means they’re poorly positioned for a move higher in the S&P 500 Index.

Surprisingly, that tells us stocks are poised for another rally from here.

The many short squeezes we saw in recent weeks have been well documented in the media. But the newscasters are missing an important part of the story.

Hedge funds balance out their short trades with long trades. When you unwind a short, you also have to sell out of your long. And if you lost money on one of those positions, you may have to unwind others as well to cover losses.

Yet this situation is playing out differently. These groups in Reddit chat rooms aren’t just going after a single short. Effectively, they’re going after every big short. Hedge funds are often concentrated in the same names… So that means these buyers are going after every hedge fund’s positions.

They may lose this battle, but they hope to win the war.

Now, these funds are quickly moving to take down their market exposure. They’re “de-risking” their books. In the minds of these hedge funds, the investing environment has become irrational. They’re safer getting out of the way than staying involved… At the moment, they feel that’s the best way to protect their clients’ money – and their future business.

These money managers are hoping that the dust will settle and they’ll go back to investing once more… And if the game has changed, they’ll learn and make adjustments. They’ll need to understand this new sentiment aspect of the stock market.

To see this in action, take a look at this chart of hedge-fund flows from Morgan Stanley’s prime brokerage. The data is through last week… 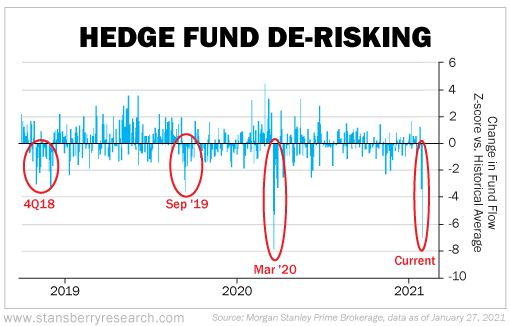 The chart shows the “Z-score” (variation from the mean) of hedge funds selling longs to cover short positions versus the 12-month historical average. Essentially, this chart means that hedge funds have been selling their longs in order to have enough cash on hand to cover their short positions.

This kind of prime brokerage data is important because that’s where investment managers house their money and assets. When hedge funds are shorting stocks, they need to borrow the shares from someone. That’s one type of service that prime brokers provide. And they also provide things like leverage for funds to employ in an effort to increase returns.

But when you see a chart like this from a prime brokerage unit, it tells you those funds are unwinding their positions and exposure.

As you can see, this week has seen the highest amount of long selling to cover short positions since the markets crashed in March. The Reddit-driven frenzy has caused hedge funds to position themselves extremely defensively.

Importantly, that could signal a market move higher…

There’s another old saying on Wall Street that goes, “The stock market tends to do what hurts the most people the most.” That means that when there’s a lot of money sitting it out, the market will go higher before sucking them back in. And that’s exactly what this chart could be showing us, too.

Hedge funds have reduced their exposure to the markets. Now, they’re poorly positioned for a market move higher. Just look at the other times that hedge funds have sold longs to cover shorts (marked with red circles on the chart above):

Hedge funds have massively reduced their risk once again. They’re unprepared for a major rally. And that’s why we could see a similar move higher in the coming months.