We’ve talked a lot lately about the need for investors to be in great renewable energy stocks.

They’re just not “alternative” anymore; they’re fast becoming mainstream, and frankly there’s no alternative but to be all-in there. More than that, the technological advances that are fueling this incredible growth put renewables strong in the running to be a kind of brand-new tech sector unto itself.

Lots of analysts, traders, and market-watchers, including yours truly, have cracked that traditional fossil fuels are quickly going the way of the T-Rex.

But pandemic-era economics – you know, the kind that sent crude oil hurtling into negative territory last April – are working on fossil energy and “traditional” energy companies in a strange new way.

Believe it or not (and I’ll show you in a second why you should definitely believe it), economic forces are shaping up underneath a handful of oil stocks that are likely to send them on a nice bullish run this year.

The charts don’t lie; I’ll name every single stock for you.

So, don’t count the black stuff out just yet. In fact, count on crude for some quick early 2021 profits…

Why These Companies Are in Play and Moving Fast
So why are stocks a lot of folks wrote off as dead meat suddenly not only alive, but firmly in must-buy territory?

The Fed moved heaven and earth to save the economy last winter as it teetered on the edge of oblivion. Jerome Powell & Co. slashed interest rates quickly to zero, moved to shore up the banks and provide liquidity, and sent the money-printing presses into overdrive; more dollars were printed in two or three months than were printed during the entirety of “QE 1, 2, and 3.”

That’s ancient history. Now, even though the pandemic feels as terrible and deadly as it’s ever been, economic outlooks for 2021 are actually improving in a lot of big economies – score one for the coronavirus vaccine. The Fed is now actively considering a tapering program, as evidenced by recent activity in 10-year U.S. Treasuries. When the Fed tapers, oil stocks rise. Some studies have even found that, of all the sectors on the S&P 500, energy rises the most when interest rates creep up.

Whenever the economy heats up and grows, energy demand, including for oil, grows stronger; it takes energy to run a big economy. Governments and businesses are going to reach for what’s readily at hand to make that growth happen as quickly as it needs to.

The market has been in full-on glut mode for nearly a year now. This reached its peak, or, depending on how you look at it, nadir, back in April, when front-month crude futures fell through -$34. That’s when it was at least theoretically possible for a trader to pay you to take oil off their hands, and maybe store West Texas Intermediate in a swimming pool or bathtub.

That means there’s almost enough crude oil to go around right now, but governments and businesses will need more and more as the recovery picks up steam in the first half of this year.

Will they reach for solar, wind, and nuclear, too? You bet they will – absolutely. But there’s not enough of that to go around, to deliver the recovery that’s so badly needed.

That puts these three stocks in a terrific position. No matter how you come down on the fossil fuels vs. renewables debates, you’ve got to be where the money is, and right now, it’s here.

Add These Three Picks Today
These companies all occupy different spaces in the fossil fuel and energy sectors; owning them puts you in the right position to capitalize on this late-stage rally in oil and gas.

Kinder Morgan Inc. (NYSE: KMI) is among the largest energy infrastructure companies on the continent right now; it owns, has interest in, and/or controls oil and natural gas pipelines – around 85,000 miles of ’em – and more than 150 oil terminals. KMI shares had been trading near all-time highs above $22 in February 2020 when the “COVID-19 Crash” sent them tumbling more than 50%, below the $10 level. 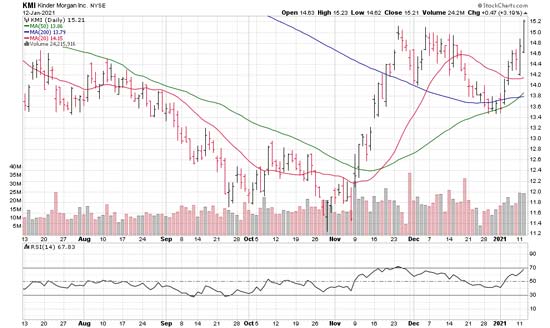 Kinder Morgan regained some of that by early summer before falling out of bed again in June and traded more or less sideways until November. But… now that economic outlooks are improving, it’s been in a pronounced bullish trend that, as I said, will likely play out over the next two quarters. I’m not ready to say it will reclaim its lost $22 or $23 territory from its current $15 level, but a 10% or 20% run looks likely. When the shares get there, then it’ll be time to think about $23. 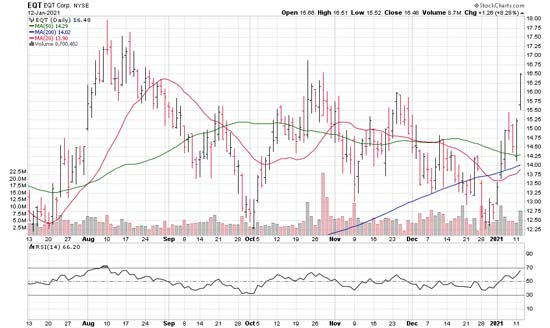 EQT’s stock sports zippier performance than Kinder Morgan; it didn’t fall as far or as fast during the March crash, and it’s been in a much more pronounced uptrend as the pandemic has unfolded. That said, it’s been more than four years since its all-time high of $44, and, again, I’m liking this for a 10% or 15% run-up in the first half of 2021; performance beyond that is the cherry on top.

And ONEOK Inc. (NYSE: OKE) rounds out this energy trio. This company was once “most admired” in the energy sector, according to Forbes, but I like it for the profit potential. ONEOK is in the natural gas and natural gas liquids patch, which, due to its overall “cleaner” nature, has a significantly brighter long-term future than crude oil does. It also sells gas through its U.S. Energy Services operations, making it a quasi-utility – always a desirable, high-performing class of stocks to own.

OKE shares have been trading flat for around 10 months now but have recently begun to show some momentum – maybe even something approaching “heat.” Buy now, and you can benefit from some of that lucrative “heat” as well.

Look to own any or all of these shares for at least six months, through June 2021. There’s every chance we’ll be holding onto them longer, but that’s your immediate time horizon.