It’s the “Groundhog Day cycle” I explained in yesterday’s DailyWealth essay. It’s incredibly predictable. And while it makes sense at a glance, a second look is all it takes to see how foolish it is.

The reality is that stocks move higher over the long term. It’s what they do.

And they can move much higher from here, starting now.

Let me explain why…

I get it. Many folks are focused on the supposedly overvalued market right now.

And it’s true that the price-to-earnings (P/E) ratio of the benchmark S&P 500 Index is roughly 30 right now.

And it has been heading up since the housing bust. Take a look… 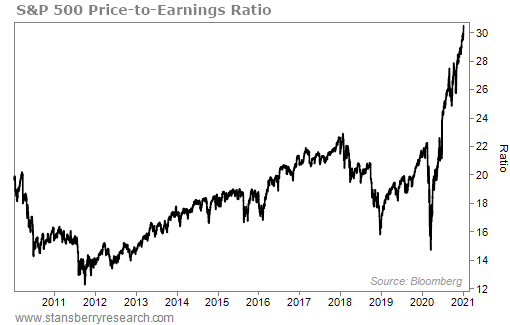 That chart might look pretty scary to you. But valuations aren’t quite as sky high as they look at first glance…

Remember, we just went through a market-shattering crisis with the COVID-19 pandemic. And I’m sure many of you have heard the adage, “the market is forward-looking.”

In other words, prices have rushed ahead of the recovery in earnings. And the obvious result of that is high P/E multiples.

That’s OK. In fact, this kind of behavior is normal. And like it or not, stock prices can go up from here.

At today’s level, it looks like we’re coming up on a dot-com-bubble-style peak. But really, you have to account for some earnings growth pushing those lofty P/E ratios back down.

This is exactly the type of action we saw after the housing bust. Earnings fell to near zero. And as a result, many stocks’ P/E ratios exploded into the hundreds. That’s just the way the fraction works.

But pretty quickly, earnings recovered and pushed P/E ratios back down to more reasonable levels. We have a similar setup today.

So let’s assume that we get back to pre-COVID-19 earnings levels sometime in the next year. Based on this measure, that means the market would have to roughly double in price before passing its dot-com peak.

Maybe you’re not that optimistic. Still, most folks expect to see earnings growth going forward. That’s just the most reasonable outcome after earnings get clobbered like they’ve been.

The point is this…

Sure, things look expensive right now. But despite the new highs, we’re actually still in a recovery. And forward-looking optimism makes the market appear loftier than it actually is.

More important, the Federal Reserve doesn’t care about your feelings on valuations. And the Fed is pushing for a Melt Up…

Back in August, the Fed redefined its inflation target. You see, the Fed has been targeting 2% inflation for years. But that also means it has been treating 2% as a ceiling.

Now, the Fed has decided to use a historical average to measure inflation. That means it’s willing to let inflation overshoot the old target to balance out the historical average. This may sound dull and wonky to you. But it just means the Fed is going to let the economy run hot… hotter than it has in years.

The Fed is also keeping interest rates pinned at historic lows. And it will very likely continue to keep them there for the next few years.

These factors will combine to push the market to higher highs… valuations be damned.

You might not agree with everything that’s happening. And today’s current high valuations might scare you. But given what’s happening, stock prices can rise dramatically from here. That means you want to own stocks now.