As the new year begins, investors are trying to make sense of a crazy time. Even with the world going through its worst pandemic in a century, stock markets were able to move beyond months of complete economic shutdowns across much of the globe and instead focus on prospects for the future.

After a big swoon in February and March 2020, that optimism produced huge gains for stock markets.

Two weeks in, 2021 has continued the stock market’s upward momentum from 2020, producing moves into new record territory for many major indexes.

Bullish investors argue that a steady rise is completely normal for stocks, and they’re hopeful for improving conditions to bring more gains in the coming year.

That’s powering big gains for high-flying stocks like Tesla (NASDAQ:TSLA). Others fear that the markets have gotten ahead of themselves and think another crash could come in the months ahead.

One way to gauge the likelihood of future stock market moves is to look at sentiment among rank-and-file investors. That would ordinarily be difficult to get. But thanks to the American Association of Individual Investors (AAII), it’s actually easy to get a reading on what Main Street investors are thinking — and whether it suggests a crash or a continuing bull market in 2021.

What the AAII tells you every week

The AAII has served more than 2 million investors with its research, information, and educational materials. The investing organization prides itself on the value of community, encouraging small groups of investors to form local chapters and bringing members together for regular conferences.

For more than 30 years, AAII has asked its members a very simple question each and every week: What direction do they think the stock market will move in the next six months? The organization tallies up the bullish, neutral, and bearish votes and then releases the results in its AAII Investor Sentiment Survey.

As you’d expect from those who believe in the power of long-term investing, there tends to be a slightly bullish bias to the survey results. Over the years, the average reading has been roughly 40% bullish, with 30% bearish and 30% neutral. That’s consistent with the upward movement of the stock market since the late 1980s.

The past year has been an interesting look into investor sentiment. Investors started 2020 being reasonably optimistic, but that positivity disappeared in the coronavirus bear market. For months afterward, investors were skeptical about the sustainability of the stock market rebound, with depressed bullish readings consistently in the 20% to 35% range, and bearish readings of 40% to 50% and above. 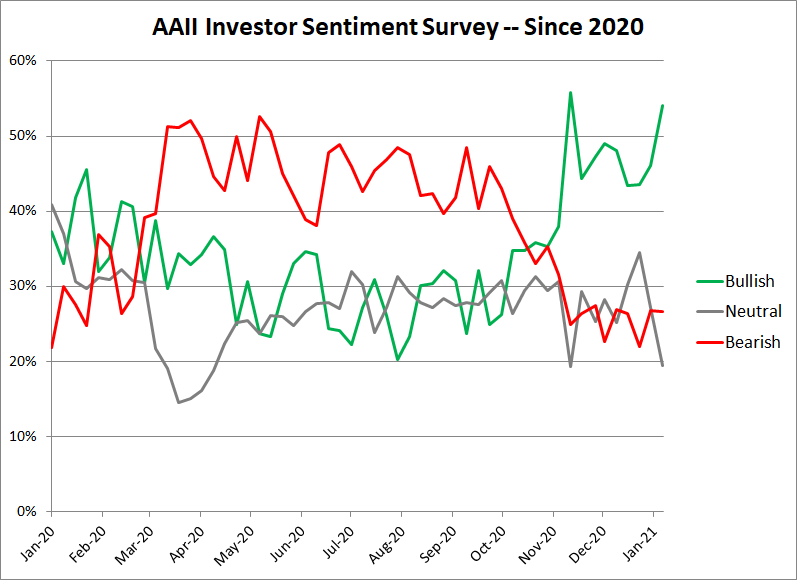 Only in November did investor sentiment start to turn. The reading for Nov. 12 was 56% bullish and 25% bearish, the most favorable numbers in more than two years. Since then, bullish measures have stayed in the 40% range.

The most recent numbers were extremely positive, as well. Among investors, 54% were bullish, with 27% bearish and 19% on the fence.

Unfortunately for market bulls, the AAII sentiment survey has tended to be a contrary indicator. Consider the following:

Yet the survey hasn’t always gotten things wrong. In early 2008, skepticism about the market showed up in the results long before the financial crisis hit. By the summer, numbers were routinely running more than half bearish versus less than 25% bullish.

Not a crystal ball

Trying to use the AAII numbers as a sure guide to whether a crash or an explosive bull move is imminent is a lost cause. But as a guide to what other investors are thinking, the survey numbers are useful.

At this point, investors are feeling good about the market. Historically, that’s often been a sign that something would come to pull the rug out from under investors’ feet. That might happen in 2021 or it might not — but it’s still prudent to be prepared either way.