Markets all around the world are breaking out to new highs. We’ve seen it in U.S. stocks, emerging markets, and other major global markets.

Another part of the world is joining that list today. And if you’ve been reading DailyWealth, you know that it’s a good sign for investors.

History tells us that new highs usually lead to newer and higher highs. It’s a bit counterintuitive. But it’s a simple reality. And today’s example shows it.

Canadian stocks recently hit a new all-time high. And two decades of data point to more outperformance as a result.

While the U.S. market fully recovered from the pandemic in August, Canadian stocks lagged behind.

Canadian stocks had been bouncing back from their March lows. But they hadn’t yet eclipsed pre-pandemic levels.

That has happened now. And it tells me that we are entering a whole new phase of this rally.

You see, new highs suggest that Canada’s market is putting COVID-19 in the rearview mirror. The markets are looking past the pandemic and on to a post-COVID world. And with vaccines shipping out globally, that could soon be a reality.

Canadian stocks have officially broken out to new all-time highs. Take a look… 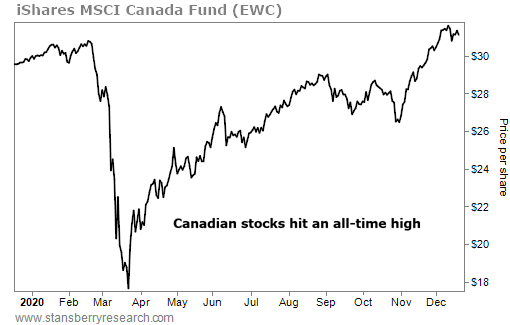 Canadian stocks crashed as COVID-19 gripped the world… But then they recovered, much like the U.S.

That’s a good thing for investors going forward. These types of moves often signal the next phase in the uptrend. And history shows that outperformance is likely in the coming months. Check out the table below…

Canadian stocks have returned around 4% a year since 2000. That’s not much to get excited about. But you can juice those returns by buying after situations like today’s…

Similar instances have led to 5% gains in six months and a near-7% return over the next year. That’s more competitive with other global markets.

Moreover, that’s just the typical gain you can expect to see after this kind of setup. If the uptrend continues to accelerate, we could see much larger returns…

The largest gain following one of these situations was 41% in the mid-2000s. Meanwhile, the biggest drop was around just 9%. So this sets up a “high upside, low downside” bet based on history.

If you’re interested in making the trade, the iShares MSCI Canada Fund (EWC) gives you a simple way to bet on Canadian stocks. And history says it’s worth considering now.