Many investors believe that financial markets react to the news. But it’s a bit more nuanced than that. Asset prices move with respect to their expectation of the news, versus the actual events that play out.

It’s a cliché, but true: Markets don’t like uncertainty. As I write, it appears that we will (eventually) have a clear winner to the 2020 election. Social unrest also appears to be less than feared. Plus, the likelihood of Congressional gridlock increases the chances that taxes will not rise.

We’re going to continue to ride this dividend wave. However, I’m not convinced that we are out of the volatility woods yet.

We have been dealing with increasingly choppy waters over the past few months. Volatility is high, and it’s actually worse than it seems.

That’s because we’ve been numbed by what happened in February and March, when we suffered the stock market’s quickest bear-market plunge of all time. 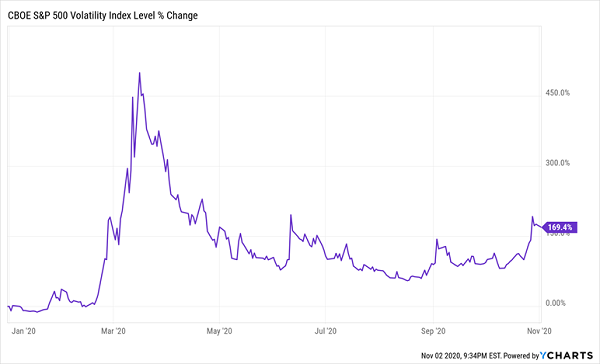 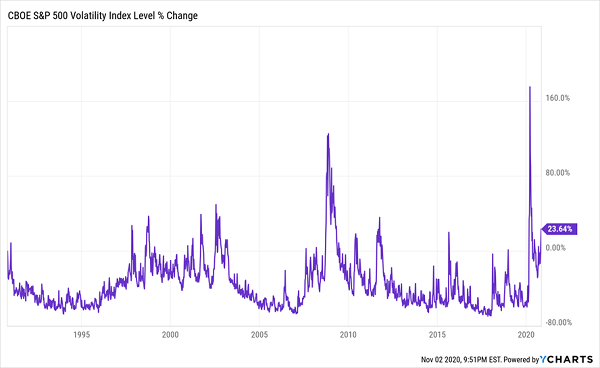 And let’s not kid ourselves. We should be ready for the prospect of renewed volatility if our dysfunctional political process encounters a hiccup.

A Hartford Funds study examining Ned Davis Research data found that “companies that grew or initiated a dividend have experienced the highest returns relative to other stocks since 1972—with significantly less volatility.”

The data is convincing, and it runs in a straight line. The healthier the dividend program, the better they performed, and the calmer their action was:

So let’s go find some peace of mind. The following are five of the safest dividend payers on the planet, according to the savvy dividend data collectors behind the DIVCON payout-health rating system.

But not only do their financials indicate a high likelihood of dividend increases going forward—they also boast lower-than-average betas, which means these stocks are steadier than the broader market. (A true “nice to have” during dumpster fire years like this one!)

Booz Allen Hamilton (BAH), a management and IT tech consulting firm whose name is seemingly plastered on at least one building in every section of the D.C. metro area, is a generous dividend raiser that I featured a little less than a year ago. Since then, shares have bounced nearly 24% versus just 10% for the S&P 500: 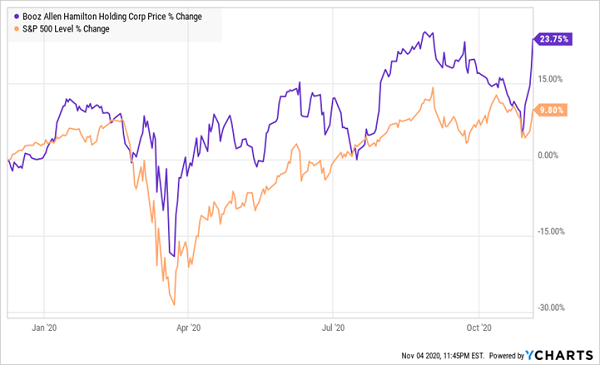 Booz Allen reported record backlog in its fiscal second quarter, as well as an 11% bump in organic growth, which was faster than the 7% rate it grew by in Q1. EBITDA margins widened from 10.5% to 11.3%.

And something pertinent to the moment: “Booz Allen is not concerned about a change in presidential leadership,” according to William Blair’s equity research team, believing business will be good for AI, cybersecurity and space defense—all areas Booz Allen excels in.

Meanwhile, DIVCON gives Booz Allen its highest rating, citing more than double the free cash flow it needs to cover its dividend, as well as strong EPS growth trends and a number of other encouraging payout-related metrics. And you can relax while collecting your (admittedly modest) income—a beta of 0.8 implies that BAH shares are about 20% less volatile than the overall market.

Kroger (KR) is the largest pure-play grocer in the U.S., operating more than 2,700 grocery retail stores under several brand names, which include 2,268 pharmacies as well as 1,560 supermarket fuel centers. Those stores are supplied not just by all the consumer staples companies you know, but also 35 of its own food production and manufacturing facilities.

On top of all that, Kroger boasts a diversified revenue stream: an additional 256 jewelry stores under the Littman Jewelers and Fred Meyer Jewelers brands, among others.

Kroger was one of the obvious and undeniable heroes of the bear market and recovery, gaining as much as 25% by the start of September. When restaurants and most traditional retailers had to close, Kroger was one of the few places people could go to spend cash, and spend they did. Sales ex-fuel jumped more than 19% in Q1, then nearly 14% in Q2—both spectacular numbers for this industry.

Alas, the bottom has started falling out. 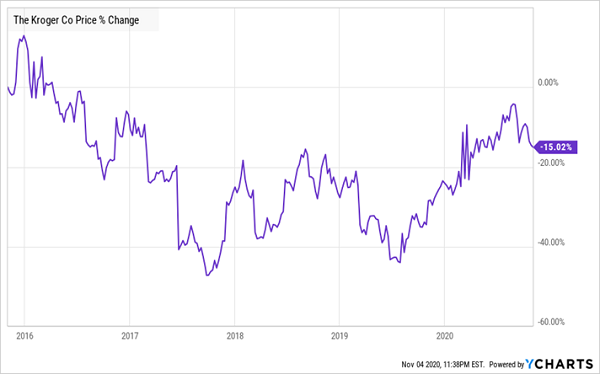 Grocery is a tough business with typically low margins and little in the way of growth. Wall Street is already anticipating the top and bottom lines to revert to the mean next year. So even though Kroger has a super-safe dividend, given DIVCON’s solid 5 rating, you’d be getting a modest yield while buying into what could be a lackluster period of price performance.

If there’s any consolation, Kroger’s a glacial mover, with a beta of 0.3 that’s about as low as it gets. A 10% pullback in the broader market should, in theory, only set Kroger back 3%. Remember, of course, that beta works both ways—if you believe in the bull, then this grocer is likely to lag.

CBOE Global Markets (CBOE) is the owner of the Chicago Board Options Exchange (CBOE), as well as BATS Global Markets. However, it also provides a wide range of other products and services, including options, futures, U.S. and European stocks, exchange-traded products (ETPs), forex and, of course, the star of 2020:

The CBOE Volatility Index, better known as the VIX.

But despite what has been a lot of action across global markets, CBOE is limping into the final months of 2020 with more than 25% losses year-to-date. 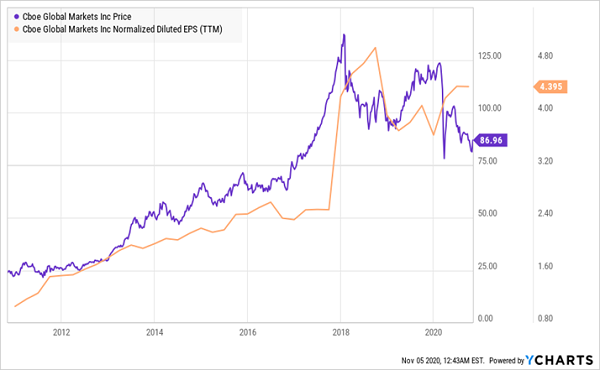 That’s OK. CBOE still has a few things going for it.

DIVCON can’t find many safer dividends; its 5 score factors in an outstanding 585% FCF-to-dividend ratio, as well as a high repurchase-to-dividend ratio that gives CBOE room to cut in a worst-case scenario where it’d have to preserve the dividend.

But there’s no reason to believe that’ll happen. While revenue and earnings growth is a little lumpy, in general, both are pointed in the right direction, and CBOE is solidly profitable. It also trades at a fair 15 times earnings, and despite its reputation of being the creator of the volatility index, the stock itself isn’t very volatile at all, boasting a five-year beta of just 0.6.

Colgate-Palmolive (CL) is a classic consumer staples stock whose brands not only include its dual namesake brands, but also Hill’s pet food, Irish Spring soap, Speed Stick deodorant, Tom’s of Maine natural personal care products and more. And its diverse stable of products has made it a smooth-moving income holding for many a retirement investor.

But as you can see below, Colgate has really sparkled in 2020.

Colgate Gets a Jolt From Homebound Households 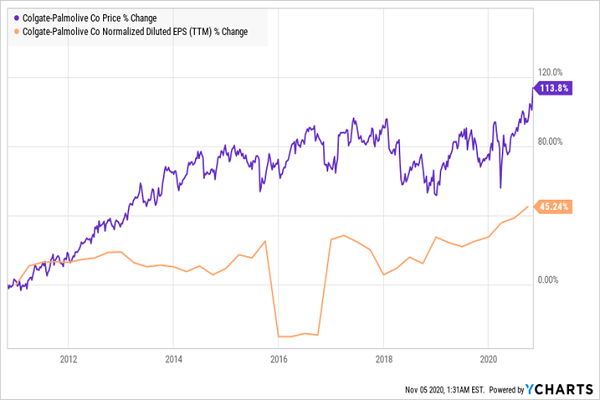 Typically, CL is a play on its longstanding dividend—the Aristocrat has racked up 57 years of uninterrupted growth. And it doesn’t get much safer, according to DIVCON, which rates it a 5 out of 5.

But in 2020, Colgate has been bought up greedily as COVID has forced people to remain at home, where they can stock up on (and burn through more of) its products.

Like Kroger, though, Colgate’s COVID bumps are likely past. CL is expected to keep growing going forward, but at its previous snail’s pace. A little more than 3% revenue growth this year. A little less than that in 2021. And you’re paying a premium price for those tepid numbers, at more than 25 times next year’s earnings. Price/earnings-to-growth is downright abysmal at 4.1. (Remember: Anything above 1 is considered overvalued.)

Colgate is cool as a cucumber—hence its 0.6 beta—but the shrug-worthy 2% yield isn’t worth the lack of explosive growth prospects.

Let’s start with one of the oddest stocks you’ll come across.

Chemed (CHE) is the company behind two exceedingly different businesses. The first, Vitas Healthcare Corporation, is one of America’s top end-of-life care providers. Its operations span 49 programs in 14 states and D.C., and it owns a high 7% share of what is a highly fragmented market.

Yes indeed. If you’ve ordered plumbing or drain-cleaning services, it’s likely that some of your money made its way to Chemed, given that Roto-Rooter services about 90% of the U.S., not to mention 40% of Canada.

Roto-Rooter bolted on Vitas in a 2004 merger, but the latter is by far the bigger component nowadays, at 66% of revenues. And the combination, while unconventional, has been churning out dependable growth for well more than a decade now, fueling exciting stock gains and sizable dividend hikes.

A Chart So Clean, You Could Eat Off It 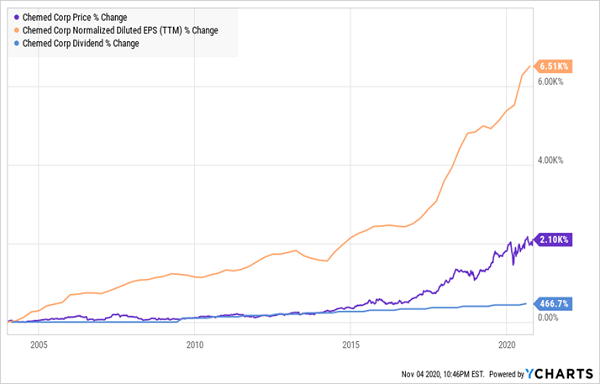 Better still, Chemed is expected to keep cranking out mid- to high-single-digit revenue growth over the next couple of years, and expand its profits by 35% by the end of next fiscal year.

If I have any quibble with Chemed, it’s that the dividend is almost too conservatively managed. It has the highest composite score (74) of any DIVCON-rated stock, good for an overall 5 rating, which indicates a high likelihood of dividend growth. And indeed, the payout is growing, including by a decent 6%-plus this year to continue a string of consecutive two-cent hikes. But CHE only pays out 8% of its profits as dividends. It can do so much more on the income front, and it shows in the form of a skinflint current yield.

Get 4x Your Current Income in Just 4 Minutes [sponsor]

But honestly, even if Chemed really let loose with its payout over the next few years, it’d probably be a decade before investors were sitting on a decent yield capable of carrying a retirement portfolio.

Heck, even if CHE doubled its payout for the next three years, that still only comes out to a 2.4% yield on cost. That’s much better than where you sit today, but only a little better than what you can get from the broader S&P 500.

You’re going to need much more income—say, 2x to 4x more than that—to make sure your portfolio keeps you comfortable and relaxed in retirement.

And you can find those high (but stable!) payouts in my “Perfect Income” portfolio.

The recent volatility has been for a few good “mini-bargain” dip-buys, but it has done little to bring up the yield on what is a chintzy market for dividend investors.

Current and soon-to-be retirees have been sent into a panic looking for safe replacement income investments. But even if you had a million dollars in cash to plunk down right now, a traditional 60/40 investment would earn you just $13,000 a year!

Thankfully, the dividend-rich stocks in my “Perfect Income Portfolio” can deliver so much more.

I frequently talk to my readers, who tell me that these stocks have managed to double, triple and sometimes even triple the dividends they were earning from their old income portfolios. And it does so while also …

That sounds pretty perfect to me. But you tell me what you think: 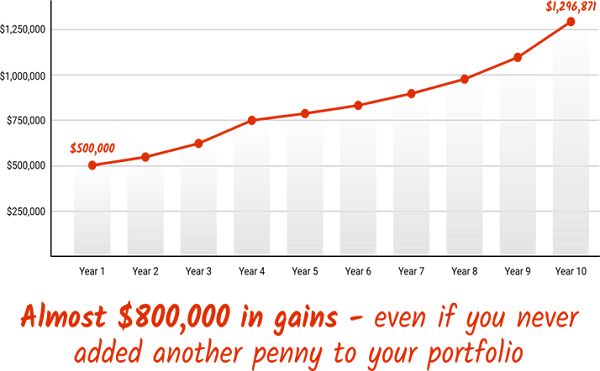 Stop obsessively staring at your 401(k) or IRA while it yo-yos up and down. You don’t need to pray to the Federal Reserve to keep your retirement hopes alive.

Instead, just let me show you the stocks and funds you need to stabilize your retirement … and even teach you more about this incredible strategy itself, so you better understand exactly what you’re investing in.

Heck, I’ll even let other investors tell you about the wealth they’ve built using my research service.

Click here to potentially 2X – or even 4x – your current income with this simple, Perfect Income Portfolio system.