What if I told you that, within months, we’ll see the strongest period of global synchronized economic growth since the period after World War II?

How would that influence your views on the stock market… on the U.S. economy… or on your own life?

Believe it or not, that’s exactly what’s likely about to happen.

In the next 12 months, we could see a period of economic growth across almost every major economy in the world that will be larger than anything seen in many decades.

It just boils down to math…

Almost all analysts agree that stocks and the stock market overall are tied to earnings or economic growth.

While the details may differ in the short term, if earnings (and the economy) grow significantly, then stocks (and the broad market) should go up significantly.

Think about what happened over the course of this year…

The first two months were incredible. Stocks were hitting new highs… economic growth was great across most major global economies… we had low interest rates… and unemployment in the U.S. was at record lows.

But the cracks had begun to appear… especially in the original COVID-19 hot spot – China.

The Chinese economy is the second-largest in the world, and the entire city of Wuhan was put on full lockdown on January 23 in an effort to stop the spread of the disease. Over the next few months, the Chinese government also imposed restrictions across much of the country.

The chart below shows China’s gross domestic product (“GDP”) growth expressed as a year-over-year percentage. Just look at the toll on the country’s economy at the beginning of this year… 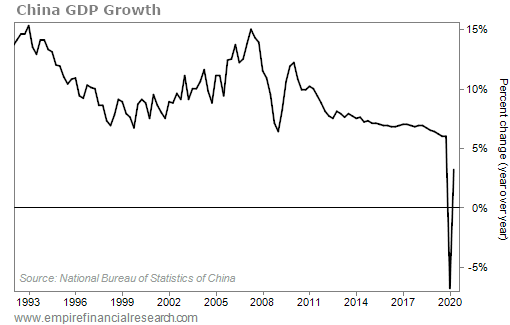 China’s GDP growth had never even come close to dropping below 5%… until in the first quarter of this year, it posted a 6.8% decline.

Of course, the quality of the data raises some concerns. Look how “tight” the growth rate was for the previous 10 years – around when current leader Xi Jinping ascended to power.

But this means that even with economic activity being tightly “managed” by the ruling Chinese Communist Party, the country still posted a big down period. (And now, note the recent return to moderate growth.)

Starting in February, Europe was the next region to get hit hard… and was essentially shut down by mid-March. The European data are much more reliable – take a look at the sharp decline early this year… 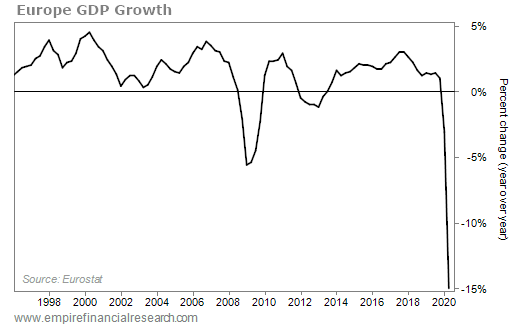 We can also look at the data separately for the U.K… 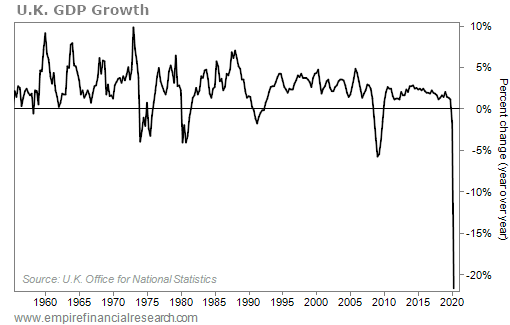 Europe and the U.K. have certainly seen periods of negative GDP growth in the past… but this was roughly four times worse than anything they’ve ever seen previously.

And finally, let’s see what happened here in the U.S. We shut down roughly within a week of Europe. Most of the country actually shut down just as hard (if not harder), and this is why we didn’t see any real spread of the virus until a couple of months later.

Take a look at the drop here… 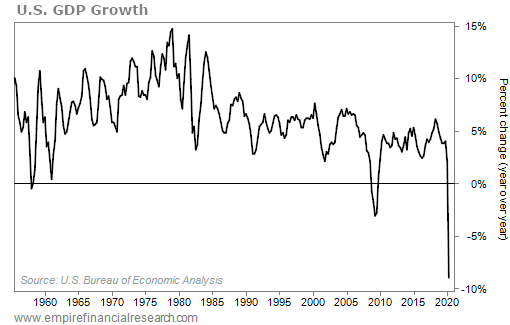 Again – like Europe – the U.S. has seen periods of negative economic growth, but this was at least twice as bad as anything that has happened before.

And unlike any other previous recession, remember why this happened: stores and businesses have been legally prevented from operating.

At some point, a combination of a successful vaccine and the disease peaking and receding will return us to some level of normalcy. This process has likely already begun… and we’ll continue to see more and more openings. Also, remember that we’ve seen the largest coordinated monetary stimulus efforts across the globe.

By January, most of the world will likely be back to some type of normal.

It could even be much better. While COVID-19 certainly destroyed many healthy businesses, it also crushed wounded or weak companies. Any business that survives this period has been battle-tested and prepared for the new world… now both leaner and meaner.

Regardless of whether you agree with my timing on the reopening of the global economies, we can all agree that it will happen at some point. (If it doesn’t, we have much bigger problems than picking stocks and stock market commentary.)

When it does happen, we’ll see a huge pickup in economic activity simply because businesses can operate again.

Given the historic collapse in economic activity, why wouldn’t we expect a historic recovery?

Again, even if we do see a “bad” recovery that falls short of previous levels of economic activity, it would still be the largest economic recovery ever… for the simple fact that the whole world saw GDP fall two to four times worse than anything it had ever seen.

Remember, this will be happening in every country across the globe.

Think about the timing of all of this… On a year-over-year basis, we’re likely to see record economic growth for most of the next two years.

Across the globe, the worst period was the second quarter of this year… and as we move back to normalcy, that means historic global GDP growth, likely into 2022.

So the next time you hear someone ask, “How can the stock market be where it is?”… ask them what they would do with stocks if they knew we would soon see the greatest period of global economic growth in the last century.