Venture capitalists who invested in Uber (UBER) at its seed stage could have made nearly 5,000 times their money when the ride-hailing company finally went public last year.

Well, it depends on who you ask…

Consider this: If you bought shares of Uber the day it debuted on the New York Stock Exchange, you’d be down nearly 20%.

With a combined market cap of nearly $100 billion, Uber, its competitor Lyft (LYFT), and meal-kit company Blue Apron (APRN) were among the most anticipated initial public offerings (“IPOs”) over the past few years.

But the story is the same for these three “unicorns.” All of these companies made billions for their early investors… who benefited from their initial hypergrowth and then dumped their shares onto the public markets to cash out.

It’s a troubling (and growing) trend in the stock market. And it’s one of the ways that everyday investors get locked out of the market’s best moneymaking opportunities.

But as I’ll show you today, a little-known type of investment can help you get in on deals like this early… and make money under the noses of Wall Street insiders.

Gone are the days when companies couldn’t wait to go public. Back in 1999, the average age of a company that went public was four years.

Today, the average age of a company going public is closer to 20 years.

Why would a company want to deal with the hassle and expense of an IPO, open up to public scrutiny, and expose itself to quarterly performance reviews… when it can raise more funding from a big private equity firm and continue to grow its business instead?

This trend is putting individual investors at an even bigger disadvantage to the Wall Street elite, who have access to these companies much earlier in their life cycles.

That’s a big reason why many of the most anticipated IPOs end up flopping. Uber raised nearly two dozen rounds of capital before finally going public. And it wasn’t alone – more and more companies seem to go further down the alphabet in funding rounds rather than going public.

By the time they finally do go public via a traditional IPO, the biggest growth is often in the rearview mirror, and individual investors are left holding the bag.

It was the same story with Lyft. The company’s first investor put in $30,000. By the time Lyft went public in early 2019, his stake was worth $100 million. But individual investors weren’t so lucky. Here’s what the stock has done since then… 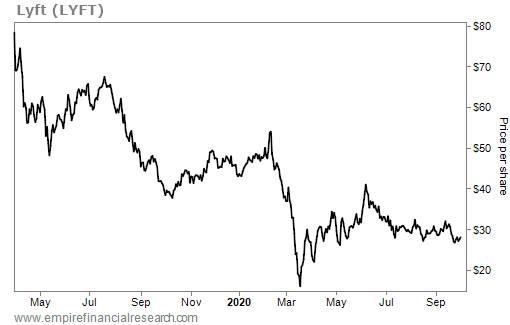 It may seem like sophisticated professional investors have figured out how to “game the system,” leaving no meat on the bone for regular, everyday investors.

Turns out, that’s not the case.

Instead of having to wait for all the growth to occur before buying the stock, one little-known investment vehicle allows you to get in super early… right alongside all the private equity funds and hedge funds out there.

Put simply, SPACs are businesses that are formed to raise capital in an IPO. The company is created with the purpose of using the funds to acquire one or more unspecified businesses to be identified in the future.

In plain English, the company’s management (called the “sponsor”) goes out and raises a pool of money from investors, saying, “We’re going to go out and find a great investment idea for this money.”

The process of raising money for the SPAC is similar to an ordinary IPO process. The underwriter – a brokerage or bank – goes out to investors and raises money by selling common stocks (i.e., regular shares of ownership in the company).

But unlike a normal IPO, instead of buying shares in a normal operating company (a restaurant chain, e-commerce company, etc.), you own a share of this pool of money.

The company holds the pool of money it has raised in a trust account while management goes out and looks for a deal. It’s common for the SPAC sponsor to also arrange to have other monies available (via loans or other equity financing) in case it finds a deal that’s bigger than the original pool of money it raised.

These sponsors then go out and look at hundreds of transactions to try to find the best investment. They’ll usually specify a particular industry or geographic area for their target business or assets, and they typically stick to what they know best.

Again, these are experienced groups of managers who conduct a massive amount of research and due diligence to decide on an investment opportunity.

While they’re looking for a deal, the company makes regular periodic SEC filings – just like any other publicly listed company.

Once the sponsors identify a company or asset in which to invest in, they formalize the legal documents and then announce the deal. The sponsors typically identify a target within 24 months… and often much sooner.

SPACs are growing in popularity because they’re an attractive alternative to IPOs or direct listings. Over the past 12 months, we’ve started to see well-known management teams and acquisitions of well-known companies… like space-tourism company Virgin Galactic (SPCE), sports-betting website DraftKings (DKNG), and electric-truck maker Hyliion.

As the traditional IPO market continues to languish and as more sophisticated sponsors begin launching SPACs, investors are getting a tremendous opportunity.

It’s a chance to participate in something unique and profitable that they couldn’t access otherwise… and to make Wall Street-like gains for the first time.

This Stock is Offering a Massive Profit Opportunity (Again)

Aggressive Traders Could Double Their Money With This Trade

Why You Should Invest NOW

Upgrades and Downgrades for Wednesday, 4/21

This Growth Stock Belongs on Your Buy List Today