On airplanes, they ask that you keep your seat belt fastened at all times, including when the fasten seat belt sign is turned off.

If the stock market were an airplane, it would be wise to follow that advice for the next several months.

The captain may not have turned on the seat belt sign yet, but things may get bumpy again.

In March, the stock market hit some of the worst turbulence that we have ever experienced.

Turbulence in the stock market means volatility. Volatility is measured by the VIX.

The VIX measures how much volatility futures traders are expecting in stocks over the next month.

Essentially, it takes the temperature of investor emotions on a daily basis.

It is a complicated measure, but all you need to know is this…

On March 18, with the stock markets in full-blown panic mode, the VIX measured historic levels of volatility.

Around that time, I predicted that this was the worst of the volatility that we were going to see.

I said that traditionally when the VIX spikes like this, it’s because investors suddenly realize the gravity of the situation they are in.

The good news is that this realization happens only once. Then reality sets in, and the fear level subsides.

As anticipated, that’s exactly what happened in March.

The chart below shows the VIX soaring and then quickly subsiding. 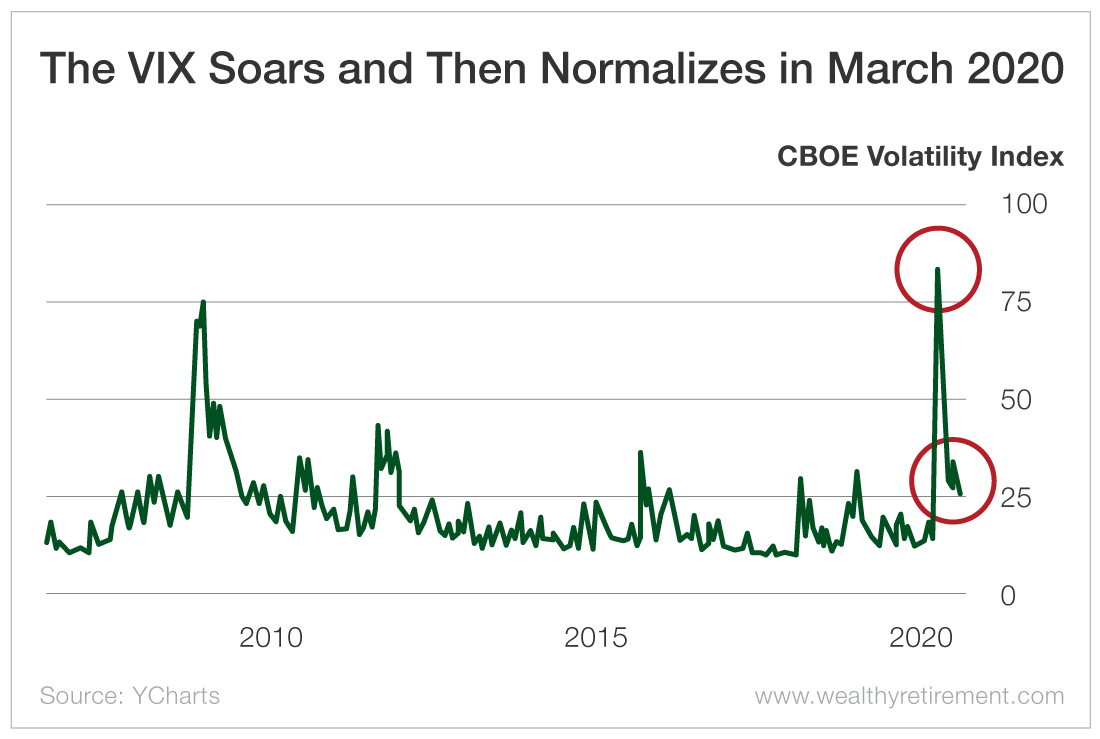 I admit that I did not think I would ever see the VIX exceed that level it reached during the 2008 financial crisis.

Volatility Is Ready to Make a Comeback

For weeks, the chart below has troubled me. 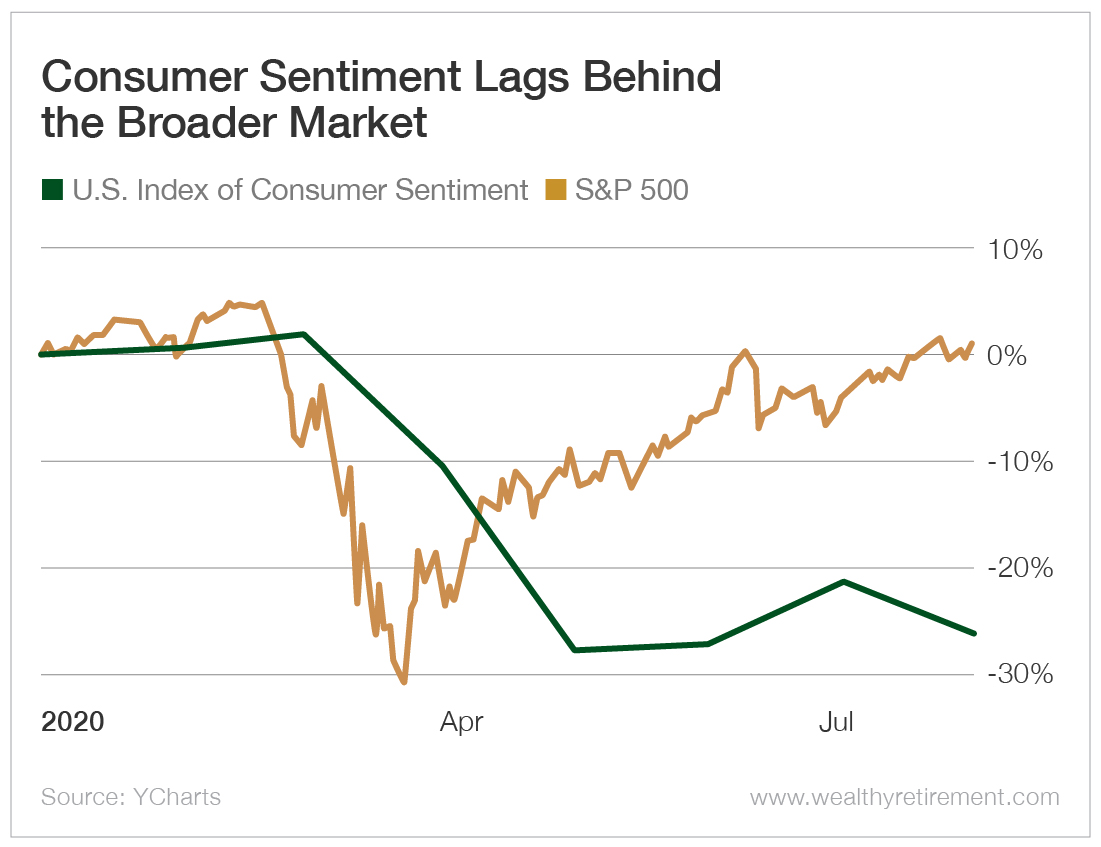 That means there is still a gap between the consumer and the stock market. The size of that gap is my concern.

During the financial crisis, consumer confidence and the stock market also plunged in tandem as the gravity of the situation hit home.

But they improved in tandem as well – almost in lockstep. 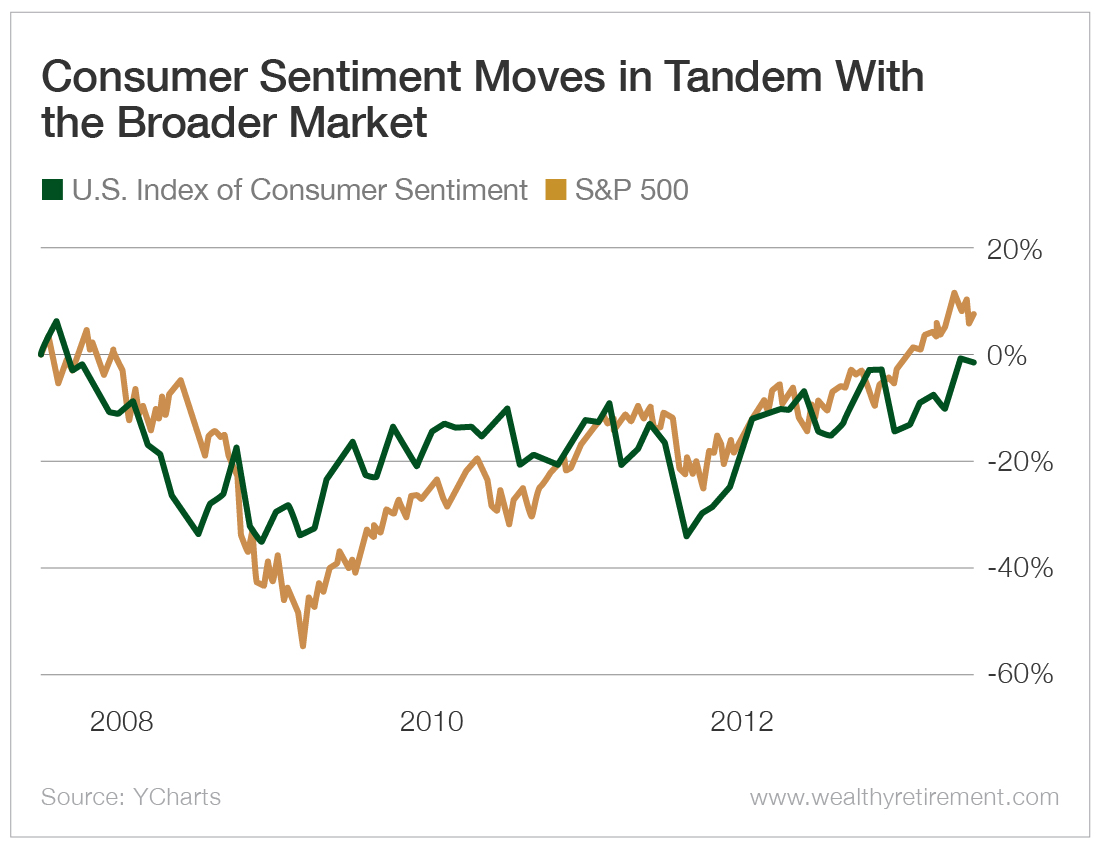 Consumer confidence fell less and rebounded sooner than the stock market did in 2008 and 2009.

Today, the situation is very different.

At some point, these two need to converge. Either consumer sentiment has to come up or the stock market has to come down.

The gap between these two measures is large, so the move required is not a small one.

So buckle up because volatility could be making a comeback.

A bumpy airplane ride is fun for no one.

A bumpy stock market is different. Volatility is the friend of the investor.

When everything is calm in the stock market, it is much harder to make money.

Anyone who was buying stocks in March knows what I’m talking about. People made some big dollars buying when everyone else was panicking.

I’m not saying that I expect the market to crash in the coming weeks or months.

But I am saying that there may be a stretch when the daily market moves are much larger.

When the turbulence returns in the coming weeks and months, don’t fear it… exploit it!