March was a terrifying time for business owners…

COVID-19 was front-page news every day. And as the economy started to close, businesses suffered. Uncertainty became the norm.

Small-business confidence fell to its lowest level in seven years as a result. But things have taken a sharp turn since then…

The economy is opening in many parts of the U.S. And while some states have put a pause on openings in recent weeks, small-business confidence is rallying.

We’ve seen a 10% jump in optimism over the past two months.

That might be surprising, given what’s happening in the world and economy today.

But it’s a reality. And it has big implications.

You see, in the past, this kind of jump in confidence has been a positive indicator for stocks going forward. It could mean double-digit gains are on the way, starting now.

Small businesses thrive when consumers can get out to buy goods. It’s that simple.

Obviously, confidence fell when COVID-19 took the world by storm. But now that some states are opening back up in the U.S., many people are out shopping, eating at restaurants, and going to bars again.

They’re back to being consumers. And that was the boost of optimism business owners needed.

In fact, we’ve seen the fastest jump in optimism since 2016. Since bottoming in April, small-business confidence is up 10%. Take a look… 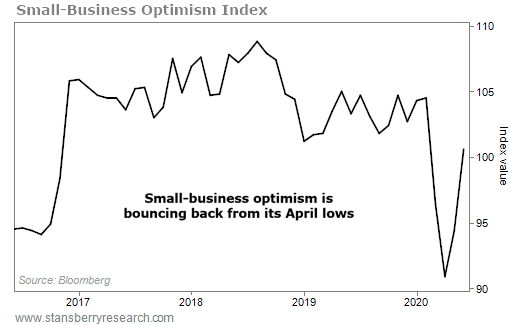 You can see the recent spike in the chart above. This shows just how quickly confidence is rebounding.

There’s obviously still a lot of bad news out there regarding COVID-19 and the economy. But small-business owners aren’t as worried today as they were in recent months.

Importantly, these kinds of quick confidence boosts are a sign that stocks can head higher…

Since 1990, when business confidence has jumped 5% or more in a two-month span, U.S. stocks have gone on to rally double digits. Take a look… 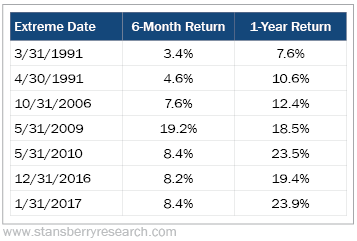 Over the past 30 years, we’ve seen seven other instances like we’re seeing today. Six out of the seven led to double-digit gains over the next year… And all seven had positive returns.

Whether you look at a six-month time frame or a yearlong time frame, a rise in business confidence is a good sign for stocks.

Of course, if the economy starts to close again, this could change. And I’m not saying that it won’t happen.

But right now, small-business owners are getting optimistic. After the rapid increase from April, this indicator points to more upside ahead.

It might not feel like that’s the smart move… But history is clear on this. You want to be long stocks now.