For months, I’ve been pounding the table about why American banks are the best value in the stock market…

Why the banks are a “no-brainer” for today’s investors…

And why even their challenges prove their value.

And now it looks like the Oracle of Omaha agrees.

After doing very little through the COVID-19 crisis, Warren Buffett is finally buying a stock…

Buffett’s Berkshire Hathaway (NYSE: BRK-B) just revealed that it purchased 34 million shares of Bank of America (NYSE: BAC) at an average price of $24.

That equates to an $816 million investment, which is a decent chunk of change even for Buffett.

So investors should ask themselves the following…

Is this $816 million all that Buffett intends to spend?

Or will he get aggressive while bank valuations are at current levels?

This $816 million investment is not Buffett’s initial purchase of shares of Bank of America.

He went into the COVID-19 downturn already owning a boatload of the stock. Now he is hungry for more.

As of Berkshire’s last required filing with the Securities and Exchange Commission (SEC) on March 31, Berkshire owned 900 million shares of Bank of America – a massive stock position that was then worth just a shade under $20 billion.

And that isn’t Buffett’s only bank…

Altogether, Buffett has more than $40 billion invested in shares of publicly traded American banks. Nobody is longer on the sector today than he is.

Reason No. 1: Bank balance sheets were in phenomenal shape going into the COVID-19 crisis, and I believe they can comfortably withstand the hit they are taking.

Reason No. 2: Their valuations aren’t just cheap – they are historically cheap. 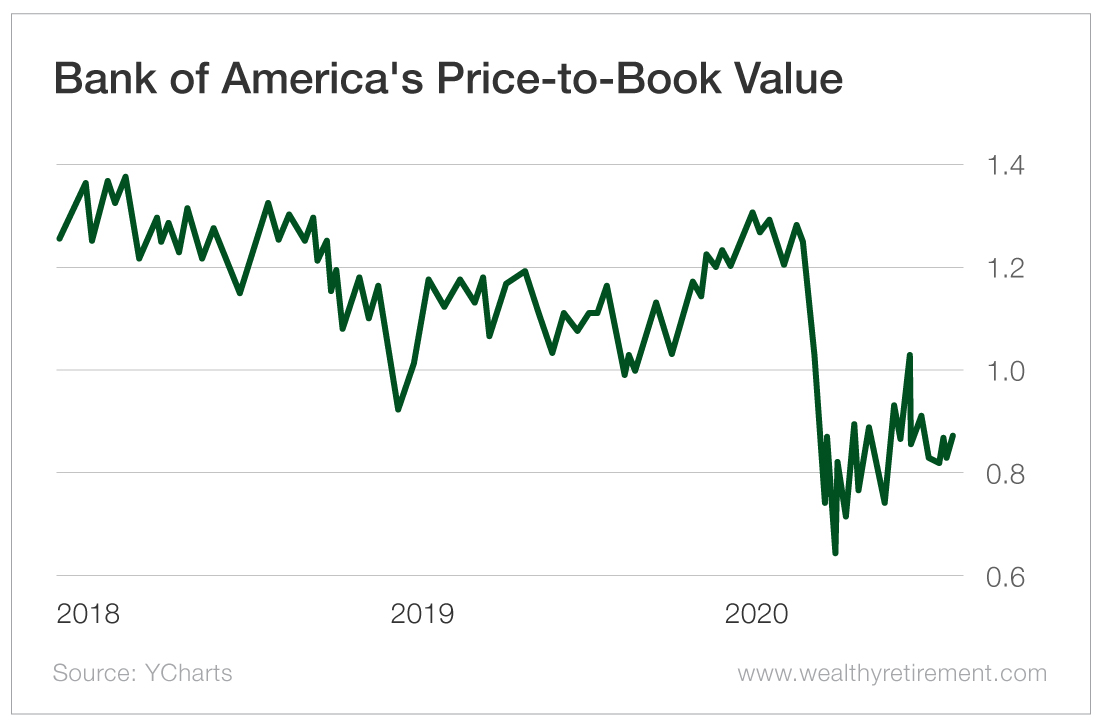 Most of the other major banks are similarly valued today. Some of them are even more undervalued…

We are aware of Buffett’s recent Bank of America purchase because he owns more than 10% of the shares outstanding and is therefore required to alert the market when he adds to his position.

But soon, Berkshire will report on all of the stocks that the company owned as of June 30, 2020. At that time, we will be able to see whether or not Buffett has also been buying additional shares of the other banks that are already in his portfolio…

Or whether he has been adding new holdings to his $40 billion-plus bet on American banks.

So if you won’t take it from me (though you should), take it from arguably the greatest investor of all time…

You’d be hard-pressed to find a better deal today than American banks.