There are two types of investors…

We all like to think we’re the second type of investor. But in reality, few of us are. Most investors fall into the first category.

Think about it… After the housing bubble burst in 2008 and 2009, were you willing to buy stocks? They were trading for a mere 12 times earnings in 2009 when the economy started showing signs of life.

My guess is that few folks had the courage to buy. That would have certainly been going against the herd.

But some brave investors – the legendary Warren Buffett, for example – took advantage of the massive opportunity to buy quality stocks at huge discounts.

For the smart investor, this led to life-altering returns.

It’s true, the markets have regained much of their losses since March (leading to a few pockets of wild speculation). But investor fear still reigns.

Coronavirus cases have been spiking in recent weeks. That’s caused folks to worry about another economic shutdown… And another shutdown would truly be devastating for our economy. (Though for the record, I don’t think that’s likely.)

Most folks are still scared of stocks, too. They’re not the bargain they were back in March and April. And this is at a time when millions of Americans are still struggling to get back to work.

As you can see, the unemployment picture is not looking great… 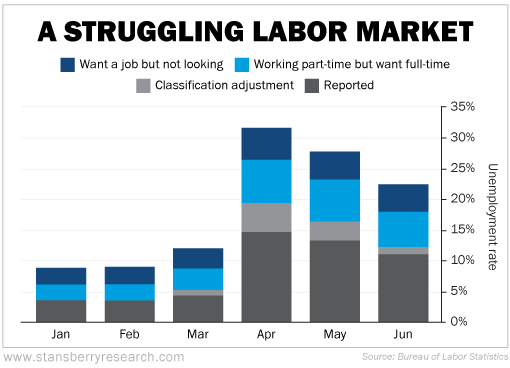 So while the stock market is close to all-time highs, the economy is only just beginning its recovery. That’s leading to a lot of nervous investors.

Piling onto the uncertainty and widespread fear, there are protests all throughout the country and a presidential election is looming ahead in November. With our country so divided, the election is sure to bring a lot of emotions and rash behavior.

There’s so much to be uncertain about today. And that uncertainty means fear.

Today, fearful investors are buying portfolio protection. They worry about everything that can go wrong over the next several months, and they want to be protected.

That’s what the herd is doing. But I’m here to tell you that’s not what you should be doing.

Now is the time to find the courage to be the second type of investor. It’s time to profit from other investors’ fears.

Today, you should take the other side of their bet… You should be the one selling folks portfolio protection.

Because there are so many people buying portfolio protection, the surge in demand has caused prices on that protection to skyrocket. Investors are willing to pay much more today than at any time over the past few years. And that leads to a once-in-a-decade income opportunity…

I’ll give you an example.

Let’s say you’ve been bullish on housing. You own a few hundred shares of a popular housing fund like the iShares U.S. Home Construction Fund (ITB). But you’re like most investors today and you’re nervous. You’re fearful that we could see a second wave of the virus and that it could crush the housing market.

So you decide to buy insurance on ITB, which allows you to sell your shares for a specified price in the event ITB crashes over the next few months. It will allow you to limit your losses if things take a turn for the worse.

Now let’s rewind a few months back to December 2019…

And remember, these are the exact same terms… The only thing that has changed is that investors are terrified today. As a result, they’re willing to pay much more today versus a few months ago.

Another example… fearful investors are paying nearly 200% more for protection on retail giant Target (TGT) than they were back in July of last year.

Fear was just at an extreme in the markets. And it’s still historically high today.

In fact, fear levels haven’t been this high since the financial crisis over a decade ago. Instead of talking about how you’re the type of investor who profits from others’ fear, now is the time to actually do it.

This opportunity of panic in the market won’t last forever. And these windows only come around about once in a decade.