While the sudden, severe coronavirus-induced stock market crash in March was a shock to investors, the quick rebound since has raised hopes.

But investors need to be wary of this rally. Looking past all the government bailouts and money printing by the U.S. Federal Reserve, stocks are sitting on very shaky ground.

So far, more than 26 million Americans have lost their jobs, and many industries have been shut down for weeks.

Stock prices have rebounded on the idea that the U.S. economy’s hard stop can be reversed just as easily – the so-called “V-shaped recovery.”

But the road to economic recovery will more likely be much longer and rougher.

“It’s a lot easier to press a button and put a manufacturing plant back online, so you might see a V-shaped recovery in manufacturing and construction,” Frances Donald, head of macro strategy at Manulife, told Yahoo Finance. “But for services, for confidence that flows through into the things that you and I buy on a day to day basis, that’s going to take a lot longer.”

When the markets recognize the true severity of the hit that’s coming to the U.S. economy, stocks will head south again – back to the lows of March or lower.

We’ve put together a list of the reasons another, deeper market crash is likely before the year is over.

7 Reasons for a Second Stock Market Crash in 2020

1. Coronavirus Cases Will Surge Again in the Fall/Winter

Both the director of the Centers for Disease Control and Prevention (CDC) and Dr. Anthony Fauci, Director of the National Institute of Allergy and Infectious Diseases, have warned of a likely second coronavirus outbreak in the fall and winter. A second outbreak would force some places back to more severe social distancing restrictions, slamming the economy again before it has a chance to get back on its feet.

2. This Rally Is a Bull Trap

If you look at a stock chart for the past few years, you’ll see a long, steep climb followed by the recent sharp drop and the bounce that makes up the current rally. This is actually a familiar pattern to those who study bubbles. Considering that the 11-year bull market was inflated by debt, leverage, and historically low interest rates, it’s easy to view it as a bubble. According to Hofstra University Professor Dr. Jean-Paul Rodrigue’s well-known chart of the phases of a bubble market, we’re in a dangerous spot right now – a bull trap. If this plays out, the drop that lies ahead will be much deeper than what we endured in March. Here’s the chart: 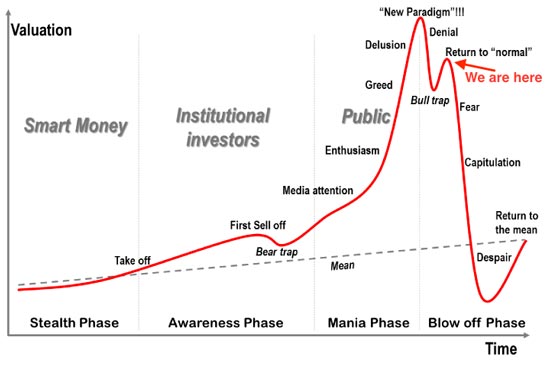 3. Small Businesses Are Getting Crushed

According to the U.S. Census Bureau, small businesses employ 47.5% of the workforce. But the coronavirus has caused more damage than many can bear. In a survey by the U.S. Chamber of Commerce in early April, 43% of small business owners said they would not survive without significant government help or a change in economic conditions. Congress has tried to help, but it may not be enough. The first aid package of $349 billion ran out of money in less than two weeks. Banks warned that the new, just-approved package of $320 billion is already mostly spoken for. If too many small businesses fail, it will keep unemployment at elevated levels and reduce the spending needed to reignite the economy.

And the last four are even more ominous…

4. A Big Drop in Stock Buybacks

From 2014 to 2019, corporate stock buybacks made up 120% of demand for shares. That means that without those hefty buyback programs, there would have been net selling in the markets. Buybacks were one of the primary pillars of the market’s monster gains through the early part of this year. But now, the losses from the coronavirus lockdown have forced many companies to become much more conservative with their cash. And stopping share buybacks is an easy first step. So far, more than 40 companies in the S&P 500 have suspended their buyback programs, and more are surely considering it.

The economic shock from the coronavirus has created so much uncertainty that many Wall Street analysts have hesitated to update their earnings per share estimates. Consensus earnings for the S&P 500 are down 8.4% so far. But with about half of the analysts on the sidelines, the real decline in EPS forecasts should be closer to 16%. That means price/earnings ratios – one of the most common ways for investors to gauge value – are deceptively low right now. In other words, stocks aren’t as cheap as they look.

6. Corporate Debt Is at Record Levels

As of December, U.S. corporate debt stood at $10 trillion. In December 2018, it was $6.3 trillion. That’s a 58.7% increase in just one year. Corporate debt is now equal to 47% of the U.S. economy. The coronavirus lockdown is putting a lot of stress on companies with debt-heavy balance sheets as it dries up cash flow. Many CEOs will face a lot of tough choices in the weeks ahead. As the International Monetary Fund (IMF) put it in an October report: “Corporate leverage can also amplify shocks, as corporate deleveraging could lead to depressed investment and higher unemployment, and corporate defaults could trigger losses and curb lending by banks.”

7. We’re at Risk of a New Wave of Mortgage Defaults

With tens of millions out of work and many Americans living paycheck to paycheck, the possibility of mortgage defaults looms. For now, lenders are allowing borrowers to delay payments on their loans. But banks can’t afford to do that for too many months. And even when the economy starts to open back up, not everyone will get their job back. A rise in mortgage defaults in the latter half of 2020 will put more pressure on stock prices.

Action to Take: Make sure you have trailing stops in place on the stocks you own. A trailing stop is a good-till-canceled sell order set at a percentage below the current price. As the stock price rises, so does the sell price. The sell order triggers when the stock drops by the percentage you set. Money Morning recommends protective stops of 25% on most stocks. To hedge your portfolio, you can also buy an inverse ETF (exchange-traded fund). An inverse ETF rises when the market falls. You have many options here, but the Proshares UltraShort S&P 500 ETF (NYSE: SDS) is the best fit for most investors.