With the U.S. economy temporarily frozen, President Trump and Congress came together to agree on a massive stimulus package. The final price tag is $2.2 trillion.

It’s hard to explain just how massive that is. I noticed that in the media, the program was often referred to as a “$2 trillion” bill. Perhaps I’m being pedantic, and I know the need for brevity in headlines. Still, it’s somewhat disturbing to learn see that .02 left off as merely a minor detail. That 0.2 is in fact $200 billion.

I remember when that used to be real money!

Part of the program involves sending every American a check for $1,200.

The catch is that the checks phase out at a certain income limit.

There are also items to help alleviate student loans and to boost unemployment benefits.

While the check isn’t a ton of money (it’s not supposed to be), it will certainly help many Americans who find themselves in a tough spot. Rent checks and utility bills are due. That’s very tough for people who work at bars or restaurants, or in the travel industry.

Afterall, the need is great. Last week, we got more economic numbers and the picture is not a pretty one. On Thursday, the Labor Department reported that an additional 6.6 million Americans filed for first-time jobless claims. Combined with the 3.4 million filers the week before, over the past two weeks 10 million Americans have lost their job.

Then on Friday, the non-farm payrolls report showed a decrease of 701,000 jobs. That’s an all-time record. I should add that March 12 was the cut-off date for that report, so the actual numbers are likely much worse.

Nationally, the unemployment rate has jumped from 3.5 to 4.4%. We’re not in a recession or even a depression: the U.S. economy is in an ice age, with almost all its machinery nearly frozen. There are, however, a few businesses that will do well from the stimulus. Let’s take a closer look.

Look at the Standout Retailers 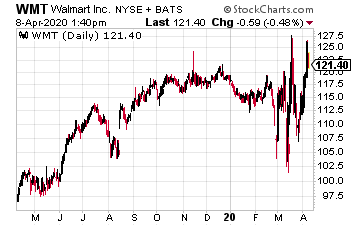 At the top of the list, I think of a stock like Walmart (WMT). The retail giant’s stock isn’t far from its 52-week high.

While the behemoth from Benton often gets criticized, it’s a valuable resource for many shoppers, especially for bargain-conscious consumers.

WMT has instituted new rules at their stores to deal with Covid-19.

For example, only one entry door can be used. Shoppers will have to line up before entering the store, with only a certain number allowed in at one time to ensure everyone is properly socially distanced, meaning only five customers for every 1,000 square feet of a given store will be allowed in at a time—about 20% capacity. The company will also open early for a seniors-only period.

WMT last earnings report missed estimates. Wall Street had been expecting earnings of $1.43 per share. Instead, Walmart only made $1.38 per share. However, that was for the quarter that ended on January 31—pre-COVID-19. That seems like a different world.

For Walmart’s current quarter, which ends April 30, Wall Street expects to see earnings hit $1.17 per share, up from $1.13 per share one year ago. That may sound like a small increase but it’s quite good when you consider that some folks are talking about the overall U.S. GDP falling by 30% or more.

Walmart also has a solid dividend. The current yield works out to 1.8%, which may not sound like a lot; however, we have to look at what it’s compared to. Recently, the yield on one- and three-month U.S. Treasuries went negative. In other words, investors were willing to pay money for the privilege of lending money to the U.S. government. A year ago, the yield on the three-month yield was around 2.4%. How times have changed.

Walmart is a solid stock and its customer base dearly needs help from the stimulus program. 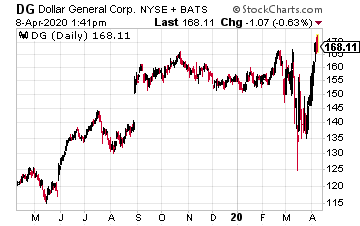 Another stock that’s poised to do well from the government’s massive stimulus program is Dollar General (DG). In fact, the shares hit a new 52-week high earlier this week.

The store has been very popular in socially distant America.

DG has limited its hours and like Walmart, has instituted a seniors-only shopping period.

Business is booming. Two weeks ago, the store said it would hire 50,000 additional employees by the end of April.

Crucially, many of DG’s stores are in rural America. Here’s a fascinating stat: 75% of Americans live within seven miles of a Dollar General. This is a great example of a store that’s helping vulnerable Americans get through a difficult time. Recently, DG reported its thirtieth consecutive year of same-store sales growth.

Look for the next earnings report sometime around Memorial Day. 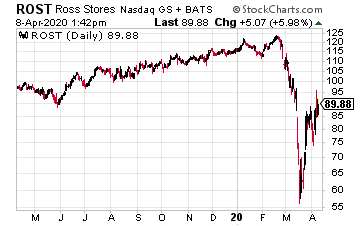 Another stock to consider is Ross Stores (ROST). The deep-discounter has done a brilliant job of making itself an important resource for lower-income consumers.

The investment firm noted that Ross has a solid balance sheet and can easily weather the storm.

Another key fact that works in ROST’s favor is its ability to “pack” its inventory for later. Many higher-end stores aren’t so fortunate since styles and taste can change quickly.

Last month, Ross said it made $1.28 per share for its fiscal Q4—the months of November, December and January, which is the key holiday shopping season. Previously, Ross had given us a range of $1.20 to $1.25 per share.

Ross also raised its quarterly dividend by 12%. The quarterly payout increased from 25.5 cents to 28.5 cents per share. Ross has raised its dividend every year since 1994.