It’s a funny thing about people…

They make life more complicated than it ought to be.

I’ve seen it over and over again. I’m guessing you have, too. People just can’t help but monkey with things… And finance is no exception.

These days, people seem to be looking for fancy ways to profit during the current health crisis. Some of them might work out. But too often, getting fancy ignores the obvious. And that, my friends, is risky business.

So, let’s take a breath together. Let’s keep things simple. And let’s look at what’s obvious in the markets today.

If you’re in the process of making fancy plans… you might need this more than you know.

Correlations have gone to one.

That’s the finance way of saying that assets are moving together. It’s a non-normal state for the market. But it tends to happen during a crisis.

In normal times, different market sectors perform differently. They perform based on their own merits… And that means some do well, and some do poorly. Most days we take it for granted. It’s how things should be, and it’s logical.

But in rare instances, everything gets moving in the same direction. That tends to happen when a crisis unfolds. So it’s no surprise that today is one of those times.

We can see this by looking at some basic charts…

In our first chart, the bold blue line is the S&P 500 Index. It’s our measure for the stock market. And it’s what you should be comparing the other lines against.

We’re comparing real estate and technology stocks to the market as a whole. And you can see that the other two lines are clearly following the same path… 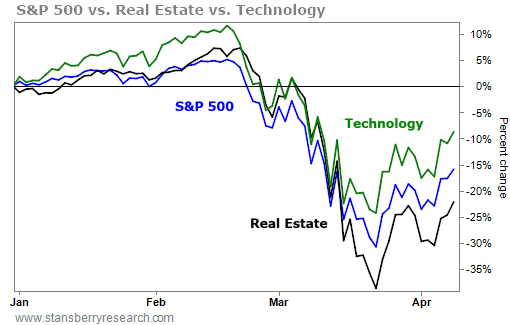 In normal times, this chart would look like a mess. The lines would be all tangled up. And it would be darn tough to say they were moving together.

Today, the opposite is true. The chart clearly shows that real estate and technology stocks are following the broader path of the market. That’s what it looks like when correlations go to one.

We can even see this behavior in sectors that you’d expect to have an upper hand during the crisis. Take a look… 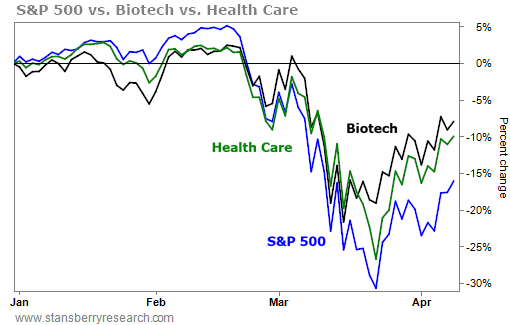 Now we’re looking at biotech and health care stocks. You might expect these sectors to do better than most in this current health crisis… But just like before, they’re generally following the path of the market.

This should get your attention. The broad market is telling us which way darn near everything is headed.

What do you do with this? One option you have is to try to get fancy. For instance, you might be able to find individual winners with big outperformance in these sectors. Maybe you’ll find the one health care company that’s better positioned than all the rest.

There’s a simpler option, though: Find the few things that aren’t following the market… and buy those.

Two sectors out there have clearly taken a different path from everything else. You can see both of these “rule breakers” in the chart below… 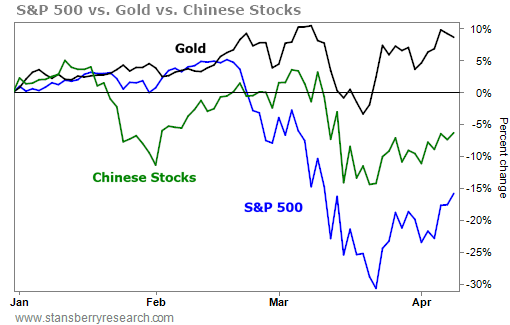 This time, we’re comparing the market to gold and Chinese stocks. And it might surprise you… But as you can see, gold and China are playing by a different set of rules.

This is the kind of “plain as day” observation that many investors are missing right now. They aren’t looking for what’s obvious. So they’re ignoring this opportunity.

Now, we could debate the “whys” behind these sectors. But that’s beside the point. We don’t need to get fancy to see what’s in front of us.

You need to pay attention to the sectors that are playing by different rules. That’s the case for gold and China right now… And it makes them two places you should consider investing in as this crisis continues to unfold.