We’re already starting to see dividend suspensions as a result of the coronavirus pandemic.

Companies like Brinker International (NYSE: EAT), Bed Bath & Beyond (Nasdaq: BBBY) and Herman Miller (Nasdaq: MLHR) have all announced either postponements or suspensions of their dividends.

More announcements like this are sure to come. In fact, the stimulus package states that any company that receives bailout money must suspend stock buybacks and dividend payments until its loans are paid back to the government.

Due to the economic havoc the coronavirus is wreaking, we are adjusting SafetyNet Pro to a new reality – that companies may have a tougher time paying their dividends now than they did before.

There will likely be a large number of downgrades.

As a result, we are becoming much more conservative in our parameters.

For example, in the past, a company that paid more than 75% of its cash flow in dividends was penalized in its rating.

We have lowered that threshold to 50%.

That way, you can have confidence that any company rated “A” or “B” is unlikely to cut its dividend, even in these trying times.

Verizon (NYSE: VZ) is one of those companies affected by the tighter model. Under normal circumstances, it would receive an “A” rating for dividend safety.

Verizon has raised its dividend every year for the past 15 years, so it has an impressive history.

The positive: Free cash flow is forecast to grow more than 9% this year to $19.6 billion from $17.9 billion. In fact, free cash flow has been steadily rising for a number of years.

The negative: Due to SafetyNet Pro‘s new payout ratio parameters, Verizon’s is over the limit, albeit barely.

Last year, the company paid out 56% of its free cash flow in dividends. This year, it is forecast to pay 52%. 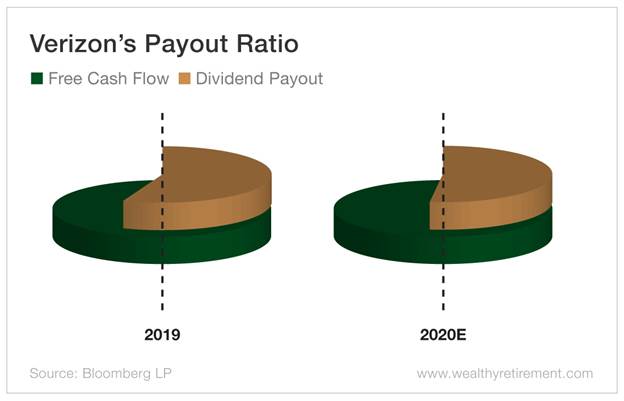 Six weeks ago, those figures would have been well within my comfort zone. But the world was very different six weeks ago. Today, those numbers are less comfortable.

Additionally, Verizon has a decent amount of debt. It has $100 billion in long-term debt. Its debt-to-equity ratio is 1.6, and its debt-to-EBITDA (earnings before interest, taxes, depreciation and amortization) ratio is more than 2.

I do believe telecommunications companies will be fairly stable during the downturn. People are not going to stop using their phones during this crisis. If anything, they’ll be on their phones even more – either for work or to kill time.

If free cash flow comes in just a little above expectations, the dividend safety rating will get an upgrade. Until then, due to the crisis, the dividend has to be considered only moderately safe. 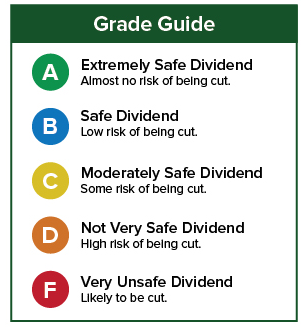