As if there isn’t enough uncertainty in the markets with the coronavirus from China, there’s also the U.S. presidential election coming on Nov. 3.

Already, there have been numerous state caucuses and plenty of primary elections. And there are plenty more over the coming weeks and months. The top job at 1600 Pennsylvania Avenue as well as several others on Capitol Hill are up for grabs.

And oh yeah, there are plenty of state elections on the docket, too.

Divisive is how most would characterize U.S. politics right now. And that isn’t what investors like to see or hear when plotting out the prospects for the markets, the economy and what to buy and own into 2021.

But I have been very closely following the elections and the candidates’ underlying agendas. Popular policy promises will cost some sectors plenty while potentially rewarding others.

But betting on such a decisive decision isn’t the way for any investor to make it out unscathed. Instead, I have been following and recommending a collection of companies which are doing well in the current leadership and that should continue to do well even with a changing of the guard next year.

The past few years have been very good for clean energy. That’s true even factoring in the support for the U.S. petroleum market — which resulted in a surging of crude and natural gas exports. So, if things remain the same after the election, all will be fine. But if there is a change, look for a further push toward clean energy. That push would help a collection of companies I have inside my Profitable Investing.

Renewable energy isn’t just a fad, nor a political football game. The economics of working with wind, solar, hydropower and other renewables continues to work for the bottom line — and not just for feel-good actions.

And the proof is in one of our more successful utilities in the model portfolios, NextEra Energy (NYSE:NEE). Since being added to the portfolio, it has generated a total return of 589% which is fantastic when compared to the S&P Utilities Index’s return of 184.2% for the same period.

It is even more impressive when compared to the S&P 500 which only managed to return 202.3% for the same time.

NextEra Energy’s base market is in Florida, where it focuses on its core regulated power operations. But it has grown in assets and revenue thanks to its broad push for wind and solar power, in the regulated and unregulated markets. In doing so, it has become one of the world’s largest wind and solar companies.

And it isn’t alone in this market. According to data compiled by the Center for Climate and Energy Solutions (C2ES), renewable energy is the fastest-expanding source for power in the U.S. from 2000 through 2018. That growth should continue through 2020.

Yet in 2018, only 11% of the U.S. energy demand was fueled by renewable sources, according to the Energy Information Agency (EIA). This means while gains have been impressive, there is a lot of opportunity for further expansion.

For U.S. electric power, renewables made up a bit more of the power pie. In 2018, renewable sources accounted for 17% of total electricity generation. That number is projected to increase to 24%, led primarily by wind and solar operations.

Now, a great deal of this development comes from tax incentives. Back in 1992, the Production Tax Credit (PTC) enabled utilities to claim credits for each kilowatt of power generated. This gave a green light to several projects, starting the initial push into the clean energy market. But the end of 2019 marked a phasing out of this specific credit.

Unfortunately, the Solar Investment Tax Credit (ITC), which provided the next leg-up for the market, also began decreasing in 2019. The ITC gave credits not just for power produced, but for investments in equipment and facilities.

These credits have been behind much of NextEra Energy’s economics. So, even if the wind isn’t blowing or the sun isn’t shining, NextEra gets credit for investing in facilities.

Although these federal programs are winding down, individual states — especially those with high taxes like California — provide credits for individual homeowners and companies. These state-wide initiatives add to the economics of power projects.

And individual states also continue to expand mandates on regulated utility companies, requiring them to generate or acquire a set amount of renewable power. This means that renewable energy isn’t just a matter of tax savings, but of requirement.

This combination of tax credits and mandates is fueling major investments in renewable energy. According to EIA and C2ES, these investments came in at $2.2 trillion in 2017 and $2.4 trillion in 2018. And 2019 should show a further rise. 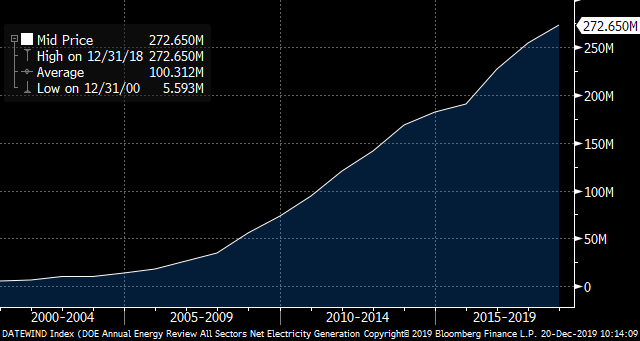 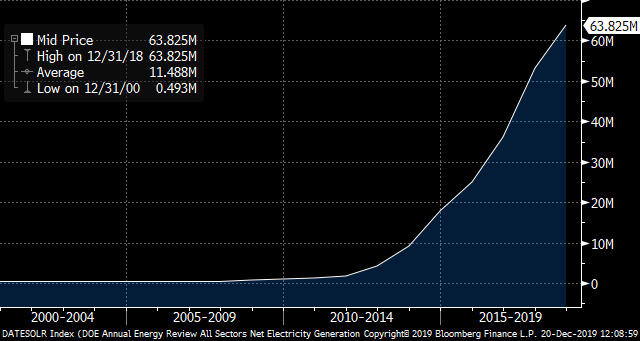 All of this comes as popular demand for wind and solar remains buoyant. Want proof? Texas — a fossil-fuel haven — has the largest wind power production of any U.S. state. It generates more than 25% of the entire country’s wind power-derived energy.

When you picture the state’s ranches and shale fields, add some wind turbines to that Lone Star landscape.

NextEra Energy has, and should continue, to do well with its renewable energy assets. But I want to focus on a company that has a great behind-the-scenes business in the same market. Hannon Armstrong Sustainable Infrastructure (NYSE:HASI) is set up as a real estate investment trust (REIT).

It capitalizes on a few bits of significant legislation, including the Investment Companies Act of 1940, the Small Business Investment Incentives Act of 1980 and most importantly, the Cigar Excise Tax Extension Act of 1960.

As a REIT it operates largely outside of federal corporate tax liability. And it invests in renewable energy projects that are built on real estate properties. Thanks to another piece of legislation, the 2017 Tax Cuts & Jobs Act, 20% of all dividend distributions from HASI are tax deductible.

Hannon Armstrong is based in the very pretty town of Annapolis, Maryland, and has been around since 1981. It adopted the REIT model in 2012 and went public in 2013.

The REIT provides lending and debt financing, and it takes equity stakes in the clean energy market. It also has supported projects that primarily consist of U.S. government properties. Uncle Sam’s backing gives it dependable credit, as he has the power of the U.S. Treasury behind his wallet.

In addition, state and local governments tend to back Hannon’s projects. All of this aids the company’s credibility and the security of its underlying assets and cash flows.

With $5.7 billion in assets, it is not the biggest business in the market. But, Hannon reports that it is investing an additional $1 billion each year to add assets.

It’s portfolio generates interest on financing, amounting to 55% of its revenue. Another 20% comes from rental income, and the remainder from equity participation and portfolio investments.

Revenues are up over the trailing year by 30.5%. And that revenue has climbed over the past five years by 198.8%.

As a REIT-based financial company, its net interest margin (NIM) — the difference between what it pays to finance itself and what it earns in interest — is a fat 12.1%. And when comparing it to a traditional financial, its return on assets is well above average at 1.9%. In turn, it has a return on equity of 5.8%.

It is a bit more expensive to run the company, which I argue because its efficiency ratio is 64.3%. I would like to see more scale and some cost controls by management, but that should be in the works already.

As a REIT, debts are part of the capital structure, so the debt-assets ratio of 57.6% is reasonable and sustainable.

The shares have returned 331.5% since coming to the public market in April 2013.

You will note in the total return graph that the shares provided a good return in 2018 in line with the REIT segment, including during the turbulent fourth quarter. You will also note that for 2019 to date, the shares are getting more attention with a rising price and dividend income.

Dividend distributions are running at 33.5 cents which yields 4.1% — above the average for REIT dividend yields as measured by the Bloomberg U.S. REITs Index. And those distributions have been on the rise, increasing 7.7% per year over the past five years. Its price-book value of 2.4 is also below the index average, making HASI stock a relative value play.

The Bottom Line on HASI Stock

As I said above, this REIT is not just a clean energy play, but a hedge against the 2020 election. We are far away from November, but I will continue to evaluate the risks and rewards of potential outcomes. Regardless of who ends up in the White House in 2021, Hannon Armstrong will be on the front line to profit from the nonpartisan green energy market.

I am recommending buying HASI stock in a taxable account now.