Dollar General (NYSE: DG) – is a deep discount retailer that sales everything from groceries to clothes. The company operates over 16,000 stores primarily in the eastern half of the United States. The company is headquartered in Goodlettsville, Tennessee and was founded in 1939.

The company has seen earnings grow at a rate of 17% per year over the last three years while sales have increased at a rate of 8%.

In the most recent quarter earnings increased by 8% and sales were up by 9%.

Analysts expect earnings to grow by 10% for fiscal 2020 while sales are expected to increase by 8.3%.

Dollar General’s management efficiency measurements are solid with a return on equity of 25.7% and a profit margin of 8.0%.

This puts the buy percentage at 66.6% and that is on the low end of the average range. This indicates a slight skew to the bearish side.

The short interest ratio is at 1.9 currently and that is slightly lower than the average stock. This indicates a slight skew to the bullish side. 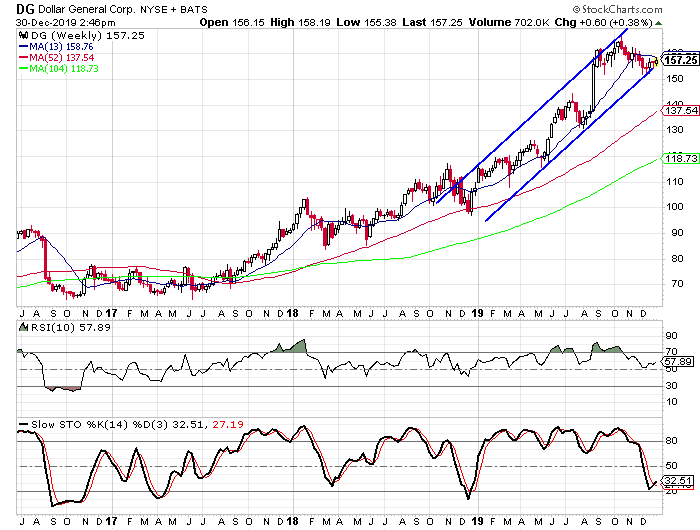 The weekly chart for Dollar General shows that the stock has rallied considerably in the last two and a half years with a trend channel forming over the past year. A small pullback in the stock has brought the stock down to its lower rail in the last few months.

The weekly stochastic readings dropped from overbought territory to below the 30 level thanks to the pullback and it’s the lowest the indicators have been since last year. The indicators did just make a bullish crossover and that is a good sign for the stock. We see similar crossovers in December of last year and in March ’18 and in both instances the stock rallied nicely.