If you want to line up big profits, create income, and keep risk low in 2020, you’re going to need a goal-specific trading tactic to get results.

I’ve got just the thing.

Today, we’re going to talk about a trading tactic that you’re going to love every bit as much as I do when you understand how, when, and why to use it.

You’ll want to master this technique for three reasons, especially now, as we head into elections and volatility picks up:

Best of all, it takes only a few minutes of your day to really see results…

It doesn’t matter whether you’re looking for growth, income, or some combination of the two. Getting there in today’s markets will require new knowledge.

Knowledge that centers around what I call the five profit pillars:

The bullish put spread (also called a “credit put spread”) is a limited risk, yet a very powerful option trade capable of producing profits regularly, in all sorts of market conditions.

As the name implies, it’s a “spread” – meaning there are two different options involved. Don’t let that term put you off if you’ve never seen it before. A spread is simply Wall Street speak for something like a “value meal” at your favorite fast food joint, in that you get more than one item for less money at the same time.

You use bullish put spreads when you expect the stocks that interest you to be neutral or to move higher.

The “spread” consists of two options – in this case, put options – that have the same expiration date but at different strikes. And in this case, you put them on – meaning you establish the trade for a credit.

That means you’re getting paid to trade as opposed to paying to trade. We’ll come back to that in a moment with an example that’ll help you sort all this out.

First, though, maximum profits are limited to the net credit received less any commissions paid, but – and this is really important – the risks are also limited. I like that a lot, especially at the moment when the markets are trading at or near new highs and many folks are worried about a correction, a downturn, or China pulling another fast one as we head into elections.

The Bullish Put Spread in Action

Apple Inc. (NASDAQ: AAPL) is trading down $5 as I type this, but I still think it’ll hit $300 a share by year’s end, in keeping with a forecast I made in January of this year. 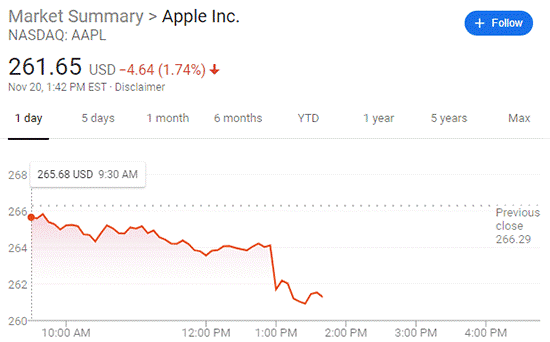 This trade – the bullish put spread – is an ideal way to play the opening and use the short-term sell-off to your advantage while also generating some quick profits.

I suggest looking in the $240 to $245 area, an area of key support where there’s a bunch of options activity, so you know the professionals are doing the same thing.

These numbers are smaller than they would be otherwise, but I don’t believe in cherry picking. I’ve deliberately chosen this example at a time when the markets are running higher so that I can show you it works even when many traders wouldn’t think it would.

The profit and loss diagram is very simple to understand, something else I like a lot.

Some people calculate returns on the total amount of capital held in reserve, but that’s splitting hairs to my way of thinking. But just in case you’re interested, that’s a return of 10% in under 30 days, or 121.66% annualized.

Yes, that’s always a possibility – and a fair question with a great answer.

The most you can lose if this trade blows up completely and Apple’s stock tanks is $500, versus $26,230 or your entire enchilada if you buy 100 shares of Apple. That, to return to the graphic above, would be when the price is at or below $240 at expiration. It’s worth noting, though, that you’ll keep all of the initial premium you received, meaning you actually have only $450 at risk plus any commissions (which, given the recent race to zero by brokerage firms, may not exist at all).

In closing, I hear from a lot of investors and traders alike who think they can’t do something like this.

The beauty of a trade like this one – the bullish put spread – is that anybody can do it with a little practice. Young or old, newbie or seasoned veteran, it doesn’t matter. Even if you don’t have a lot of money to start with.