Normally, this would only be for paying subscribers… But this time, Steve told me, “We have to share this story.”

It was simply too important to keep under wraps.

You see, each month we publish the regular issue of our high-priced True Wealth Systems service. It uses powerful computer software to pinpoint trading opportunities.

But we also publish all the buy and sell recommendations that our computers generate at the end of each month.

That way, readers always have access to the incredible top-down view that True Wealth Systems provides.

Now, I apologize if this sounds like an advertisement. We’re not trying to sell you anything. Instead, I’m going to give you a rare peek under the hood. The reason why is simple.

This month, the True Wealth Systems computers have signaled a major shift in the market. And it’s a reason to be incredibly bullish.

This month, it’s all about the number 13.

Specifically, the True Wealth Systems computers signaled 13 new buys at the end of October. That’s 13 out of 53 sectors and markets we track.

Put another way, 25% of the world’s most important economies and sectors moved into buy mode over the last month.

Now, I can’t give you the full list of buys and sells. That wouldn’t be fair to True Wealth Systems subscribers. But I can tell you this…

The True Wealth Systems computers are screaming “buy” in broad U.S. stocks… and in the U.S. tech sector.

In fact, one of our tech-specific recommendations has soared an incredible 21% in just a little more than a month.

Remember, I’m not telling you all this to boast. I’m sharing this with you because a major shift is taking place in the markets. And it’s one you want to take advantage of.

History has repeatedly shown us that great run-ups like this are common near the end of bull markets. Steve even came up with a name for it… Around these parts, we call that surge a Melt Up.

Still, it’s possible that the media has turned your head around on this topic. Doom and gloom reign supreme… even as the market makes new highs.

On November 5, my colleague Chris Igou showed you that investors have been panicking out of the market. The last two years have been a rollercoaster for stocks. And the crowd is running in the wrong direction.

Despite the rough patches, stocks are headed up. You don’t need to be an expert in trading systems to know that. Just look at this chart of the S&P 500 Index below… 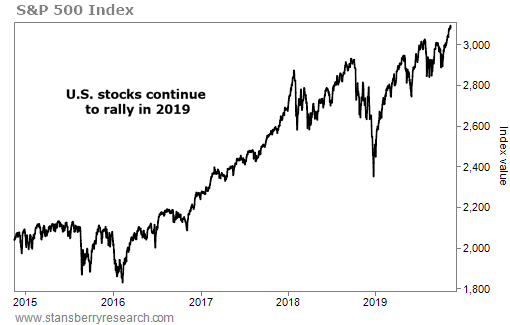 You should also know that it isn’t unusual to see spikes in volatility like we saw last year. It’s common. And it’s straight out of the Melt Up playbook.

During the final year of the dot-com era Melt Up, we saw a total of five corrections on the way to the top.

So, it’s understandable if you’re feeling fearful. But when you look at the chart, you should still be able to see that stocks are headed up. Even more important, our trading systems just confirmed there’s no reason to worry…

The True Wealth Systems computers have detected the turn, too. And they’re flashing hugely bullish signs as a result.

We have 13 new buy signals. My advice is that you listen to them and stay long.