If you want to know how investors feel about the markets, don’t ask them. People tend to say one thing and do another.

Instead, you need to look at what they’re doing with their money. Fund flows don’t lie. And that makes them one of the best ways to keep track of investor sentiment…

Today, investors are terrified of U.S. stocks. This year, we’ve seen the largest flows out of stock funds since 2008, relative to the flows into cash and bonds.

That’s right… Even with U.S. stocks hitting all-time highs, investors are still scared. And as contrarian investors, we know this is hugely positive. It should mean even more upside from here.

Just look at what happened during the run-ups to the 2000 and 2007 market peaks. Investors threw caution to the wind. They were buying with no fear of a major downturn.

Then, when there were no buyers left, the top finally came.

That’s the type of euphoria you would expect today, after a decade-long bull market. But despite this record run-up in stocks, investors are still scared…

According to investment bank Goldman Sachs, American stock funds have seen $100 billion in outflows in 2019. Meanwhile, more than $350 billion of inflows have poured into bonds… while more than $430 billion flowed into cash.

Investors are getting out of stocks and into safe-haven assets. Fears about the trade war and a possible recession are keeping investors on the sidelines. 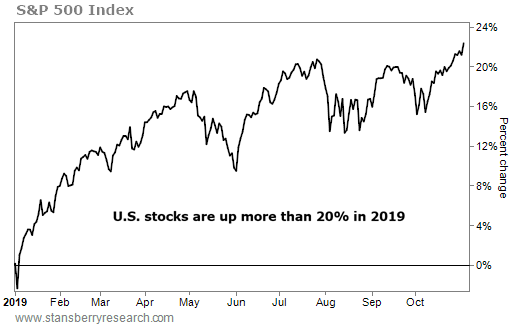 Folks should see this as positive. They should be clamoring to buy. The enthusiasm should be palpable… But it’s not.

Instead, investors are getting out of stocks. But I don’t expect this to last forever.

Soon, fear of missing out will call investors back to stocks. They’ll get greedy. And as investors start to pile back into the market, we could see much higher stock prices…

In fact, that’s exactly what’s likely to fuel the final stage of the Melt Up that my colleague Steve Sjuggerud is calling for. And it’s why you need to still be invested today.

Don’t let the “wall of worry” scare you away from buying U.S. stocks. Today’s fear is another bullish sign for the overall market… Stay long.

Upgrades and Downgrades for Friday, 4/3