Trade talks are unlikely to breach the divide between the U.S. and China…

At least, that’s what the financial media told us in mid-September when officials from the two countries re-engaged in talks. Commentators said differences were so far apart, it would be near impossible for either side to meet the other in the middle.

Headlines said that the talks had hardened into a political and ideological battle. It might take decades before the two sides could fix anything.

After those dire predictions, the market began to drop… By the beginning of October, the S&P 500 Index had lost 3.2%. Investors were scared tariffs would keep rising and the growth outlook would worsen.

That’s because the U.S. had recently imposed additional tariffs on Chinese imports. And it was preparing to raise tariffs even further on October 1.

When negotiators sat down together again, it was the first time the two sides had conducted face-to-face meetings since July.

And that’s when the dialogue began to change.

Now, all the signs say we should expect a deal soon – possibly within weeks. Today, I’ll share three reasons why… And I’ll show you why it could lead to powerful gains from here.

There’s an old saying about negotiations in American politics – when it seems like the two sides are farthest apart, they’ve never been closer together. That’s what appears to have happened here…

Both sides agreed they would rather work things out diplomatically. Soon, reports began to surface from both the U.S. and China that talks were moving forward.

This past Monday, high-ranking officials from China and the U.S. met to discuss a potential visit to the U.S. from China’s President Xi Jinping… And if all goes well, the visit will be the occasion for Xi and President Donald Trump to sign a “phase one” deal.

A signing was already planned for the Asia-Pacific Economic Cooperation (“APEC”) Summit in Chile on November 16-17. But it was canceled in the wake of violent protests there. Now, the two sides are searching for an alternate venue.

Trump has said he would like to hold a signing in the U.S. Many are saying that Iowa would be an ideal spot. Given that the U.S. has put pressure on China to boost agricultural purchases from U.S. farmers, a signing in Iowa could make for a great photo opportunity.

Chinese officials have also said they would like Xi’s trip to the U.S. to be an official state visit, in addition to the signing.

All this good news has had a profound effect on the market. Take a look at this chart of world stocks from index provider FTSE. You can see the rally since talks resumed… 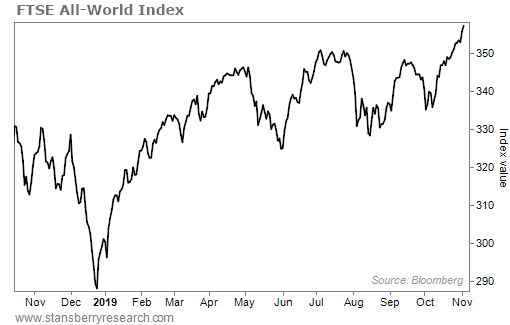 Of course, trade-war talks have been a roller-coaster over the past year. And the market followed the headlines… with major drawdowns when negotiations took a turn for the worse. So how do we know things won’t suddenly change again?

We don’t. But there are several reasons why what seemed a total impossibility two months ago is now looking likely…

Second, the effects of the global slowdown are clearly showing up in U.S. economic data. For instance, third-quarter gross domestic product (“GDP”) growth came in at 1.9% – better than expected, but much lower than last year’s growth of 2.4%. If Trump can make it through impeachment proceedings, the economic effects of the trade war will threaten his re-election chances – and he doesn’t want that.

Lastly, the U.S. reversed course and agreed to China’s proposal to make an agreement in phases. That means many of the more contentious issues can wait until later… which gives both parties no reason to hold off on a partial agreement in the short term.

So, after investors and the media nearly gave it up for dead, a trade deal now looks all but certain.

China and the U.S. won’t resolve their differences all at once. That much is true. Still, even a phase-one deal should mean at least some of the tariffs will end.

This could do a lot to get global growth back on track. Plus, it would lift one of the biggest sources of uncertainty in the market… which means investors should get more confident about putting their money into stocks.

We’ve already seen the beginnings of this. Stocks have rallied to new highs. Now, a trade deal is incredibly close. So stay long… We could see a powerful run-up from here.