For many Americans, taking Social Security benefits at 62 is less of a choice and more of a necessity. A huge fraction of Social Security participants rely on the program for the majority of their income, and for some, their Social Security check is just about the only income they can count on month in and month out.

However, those who’ve managed to save up a healthy nest egg for retirement have more options.

For them, delaying Social Security can be attractive, as it allows them to get larger monthly benefits later on, and in some cases pass those higher checks on to their loved ones in the form of survivor benefits.

Yet there’s a choice that very few Social Security experts talk about — taking Social Security at 62 even if you don’t really need it, and investing your monthly benefits to generate additional returns.

The flaw in most Social Security analysis

Traditionally, most people looking at Social Security concentrate on the total amount of money they’re likely to get over the course of their lifetime.

That’s in part because Social Security itself has argued that its benefit formula is designed to pay out roughly the same regardless of when you claim benefits — assuming that you live to roughly your actuarial life expectancy.

This approach has spawned breakeven analysis, which looks more closely at the impact of when you claim benefits. In general, if you just look at total dollars paid after adjusting for inflation, traditional breakeven analysis concludes that living through your late 70s or early 80s is the typical time at which delaying benefits starts to pay off.

Here’s an example, based on someone who had earned a typical benefit of $1,400 per month at full retirement age of 66 1/2: 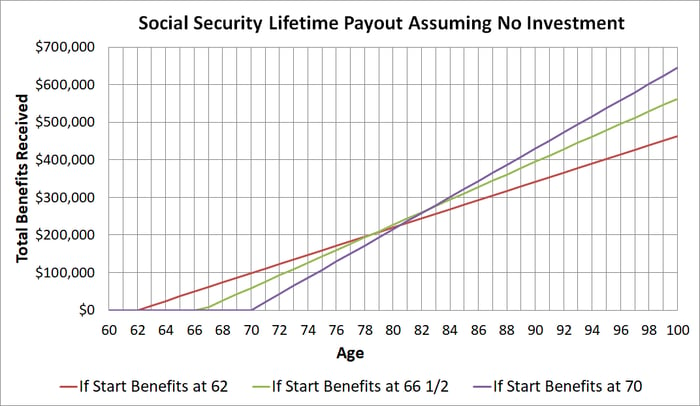 You can see that the lines start to cross each other somewhere between 79 and 82.

But the problem with traditional breakeven analysis is that it doesn’t reflect the time value of money. That might not matter so much for the many retirees who need to spend their Social Security as soon as they get it.

For those who can invest their benefit checks, however, the time value of money makes a huge difference, because investing early benefit checks provides a longer time horizon for investment growth.

What a difference a positive return makes

Even modest return assumptions can make a marked difference in your analysis of when to claim Social Security. Say, for instance, that you were ultraconservative and wanted to put your money in bank CDs. Right now, you could get long-term CDs paying around 2% in annual interest. If you do that, here’s what happens to the graph above: 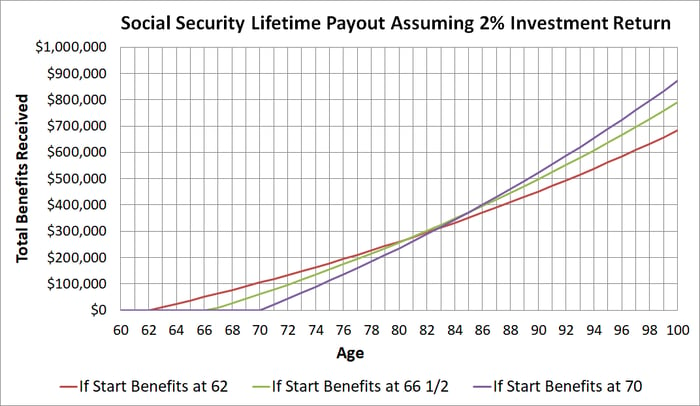 As you can see, the breakeven dates move out a little bit, with the earliest coming at around age 81 and the latest coming around 84.

Put in more ambitious return goals, and things get even more exciting. Here’s the graph for a 7% annual return: 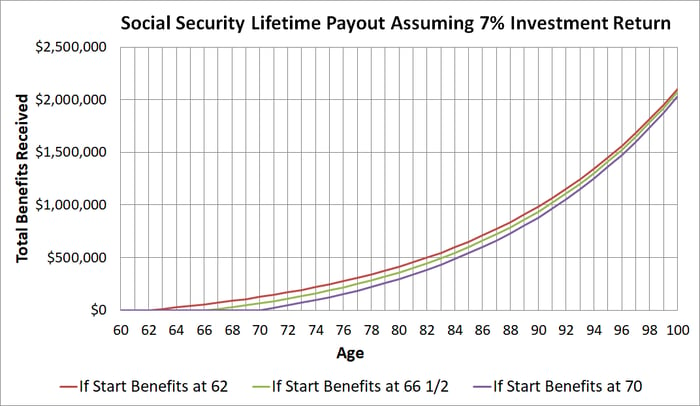 The lines start to converge, but even at age 100, they haven’t yet touched. Claiming early gives you a sustained lead, and claiming later never catches up.

Some caveats to consider

The graphs above might convince you that claiming early is always the way to go. But there are many more factors to take into account, including these:

Yet for those who do have the financial resources to invest their Social Security, considering the time value of money is a worthwhile exercise. You might not end up changing your claiming decision because of it. But in some cases, it can make a big different in your overall financial well-being in retirement.