Social Security benefits are a major source of income for many retirees, with roughly half of baby boomers saying their benefits are going to be their primary income source once they retire, according to a survey from American Advisors Group.

However, your benefits are only designed to replace around 40% of your pre-retirement income, and the average check comes out to just $1,461 per month. So if you are going to rely on Social Security to make ends meet in retirement, you’ll need to squeeze every dollar you can out of your benefits.

If you’ve worked and paid Social Security taxes for at least 10 years, you’re eligible to receive Social Security benefits as soon as you reach age 62. But even though you’ve been paying taxes for years to receive that money, your monthly checks may still be subject to federal income taxes — which can throw off your retirement plan if you’re not accounting for it.

Will your benefits be taxed?

How much you’ll pay in taxes on your benefits (and whether you’re taxed at all) depends on your income in retirement. When determining taxes, the Social Security Administration considers your “combined income,” which is your annual retirement income plus half your Social Security benefits. If you earn above a certain limit, your benefits will be taxed: 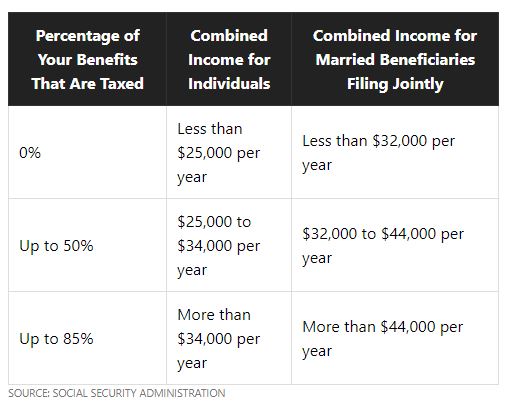 For example, say you’re receiving $20,000 per year in Social Security benefits, and you’re also withdrawing another $25,000 per year from your retirement fund. To calculate your combined income, you would add your outside income ($25,000) plus half your yearly benefit amount ($10,000) for a total of $35,000. If you’re filing as an individual, $35,000 in combined income means 85% of your benefits may be subject to taxes. For married couples, though, you may only need to pay taxes on up to 50% of your benefits.

In addition, you may also be subject to state taxes, depending on where you live. Most states don’t tax Social Security benefits, but 13 of them do (Colorado, Connecticut, Kansas, Minnesota, Missouri, Montana, Nebraska, New Mexico, North Dakota, Rhode Island, Utah, Vermont, and West Virginia). Each state has its own regulations surrounding Social Security taxes, so even if you live in one of these states, you may or may not need to pay state taxes depending on your income. It’s a good idea to research the state tax laws for Social Security in the state you plan to retire in.

How to maximize your Social Security income

Paying taxes on benefits can be tough on people who are relying on Social Security for a significant portion of their retirement income. While it’s difficult to avoid paying taxes altogether (unless you earn so little that your income falls below the annual income limit), you can take a few steps to maximize your earnings so that taxes don’t wreck your retirement plan.

One of the easiest ways to increase your Social Security checks is to delay claiming benefits. You can claim as early as age 62, but for every month you wait after that to claim, you’ll receive slightly larger checks. Claim at your full retirement age (FRA) — which is age 67 for those born in 1960 or later — and you’ll receive the full amount you’re theoretically entitled to. Then if you wait until after your FRA to claim, you’ll receive a bonus on top of your full amount for each month you delay. This bonus maxes out at age 70, though, so although you can still claim after that, there’s no financial incentive to wait past age 70.

Depending on exactly when you start claiming, your benefits can be significantly reduced or boosted. Say, for instance, your FRA is age 67, and you’d be receiving $1,500 per month by claiming at that age. If you claim at 62, your benefits will be reduced by 30%, leaving you with just $1,050 per month. Wait until age 70 to claim, though, and you’d receive a 24% boost on top of your full amount, or $1,860 per month. The difference between claiming at 62 and 70 amounts to nearly $10,000 per year, which can go a long way if your benefits are your primary source of retirement income.

Choosing when to claim benefits is a personal decision, and delaying benefits isn’t the right choice for everyone. But if you’re going to be struggling to make ends meet in retirement while also paying taxes on your benefits, those fatter checks can make retirement a little more enjoyable.