Extra Space Storage (EXR) – is classified as a Real Estate Investment Trust (REIT). The company operates self-storage facilities in the United States and Puerto Rico. As of the end of June, the owned and/or operated 1,752 stores with over 1.2 million storage units and 134 million square feet of storage space. The company is headquartered in Salt Lake City, Utah and was founded in 1977.

The company just reported earnings last week and the EPS increased by 3% over the third quarter of 2018 and the sales increased by 10%.

Over the last three years EPS have grown by a rate of 10% per year while sales have increased by 10% per year.

One statistic that really jumps out for Extra Space Storage is its profit margin of 38.1%.

That is one of the biggest profit margins I have seen lately.

The company also boasts a return on equity of 17.4%.

The sentiment toward Extra Space shows quite a bit of skepticism being directed toward the stock.

There are 12 analysts covering the stock at this time with only three “buy” ratings.

There are seven “hold” ratings and two “sell” ratings. The buy percentage is a meager 25% and that is well below average.

The short interest ratio is 5.9 and that is well above average and signifies pessimism from the short-selling crowd. 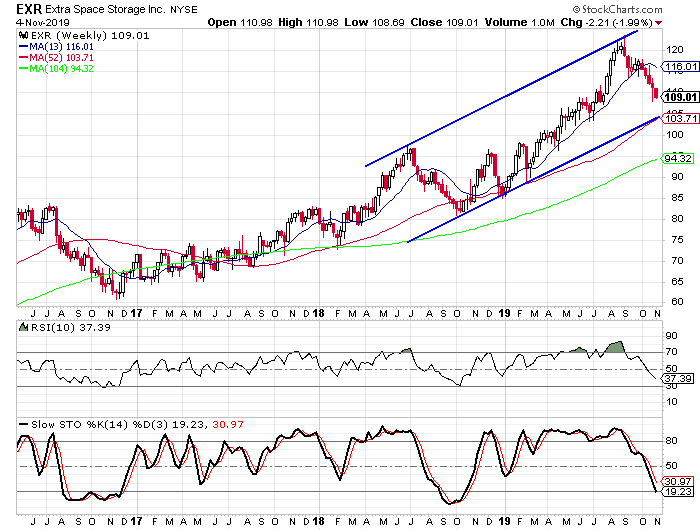 Looking at the weekly chart we see how Extra Space has been trending higher since late 2016. The steady climb accelerated a little in early 2018, but then pulled back in the second half of the year. The stock found its footing again in the fourth quarter of last year as the rest of the market was struggling.

We see that a trend channel has formed and the stock is approaching the lower rail of the channel at this time. The weekly overbought/oversold indicators are the lowest they have been since last fall and I look for them to reverse in the coming weeks.