To say October is a tricky month for investors would be an incredible understatement. It’s an outright headache.

Stocks snap out of their post-summer funk sometime in October, most of the time, and kick-start their usual Q4 rally. But that could happen at any time during the month.

This particular October is doubly-difficult. For whatever reason, the third year of a Presidential term tends to be weak through the middle of November.

There’s no denying the market’s still more than overbought enough right now to fuel several more weeks’ worth of downside.

Be that as it may, there are still plenty of stocks to buy for a shot at October gains.

Some are starting the month out with the advantage of coming out of a September slump, while others are perennial October winners.

A handful of these names are just plain unstoppable right now, packing enough momentum to plow through any headwind on the horizon.

In no particular order… 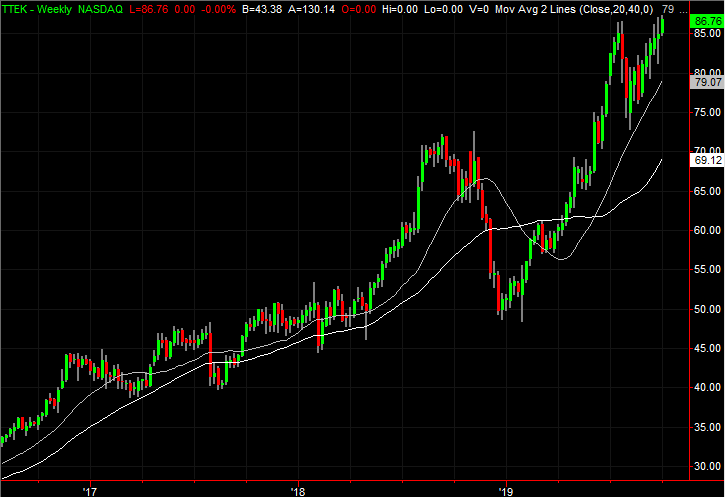 Tetra Tech (NASDAQ:TTEK) isn’t a household name, though perhaps it should be. The company’s classified as an engineering and construction outfit — and that’s what it is — but it specializes in building water treatment and environmentally-minded projects.

While seemingly boring on the surface, consistent sales growth on the order of 9% this year, and next, and earnings growth commensurate with that level of top-line growth.

Driving that consistent (and increasingly consistent) forward progress is the need described in the latest look at how the Powershares Water Resource Portfolio (NASDAQ:PHO) is faring in this year’s ETF-picking contest. The 72% gain TTEK stock has dished out this year is one of the reasons PHO is doing so well, and shares are still going strong. 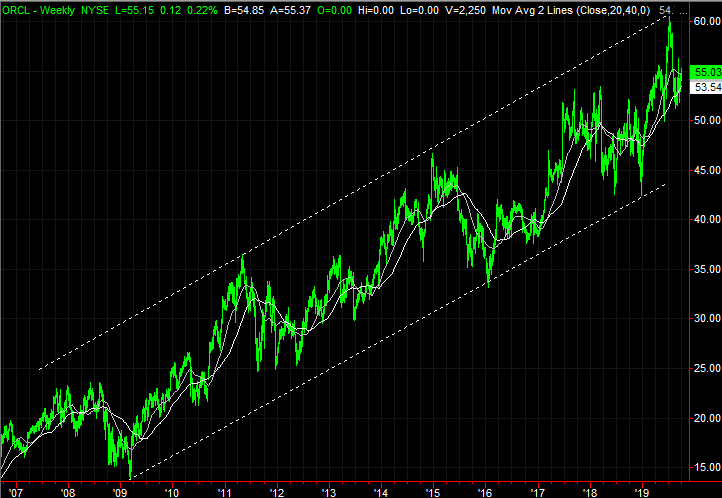 It’s one of those tech stocks that never seems to make it into the center ring of investor discussions, but perhaps Oracle (NYSE:ORCL) thrives by remaining outside the center of attention.

It’s certainly thrived since the economy worked its way out of trouble following 2008’s subprime mortgage meltdown. Although erratic, ORCL stock has made reliable progress thanks to a well-framed and frequently-confirmed rising trading range, framed by white dashed lines on the nearby chart. Notice the stock’s NOT testing the upper boundary of that range right now either, meaning there’s room left for an October gain.

Bonus: Oracle is one of the ‘big tech’ names that has sidestepped the scrupulous attention the Department of Justice is giving the likes of Alphabet (NASDAQ:GOOGL, NASDAQ:GOOG) and Amazon.com (NASDAQ:AMZN). It’s all perception, but the perception of Oracle as lower-risk prospect is still powerful. 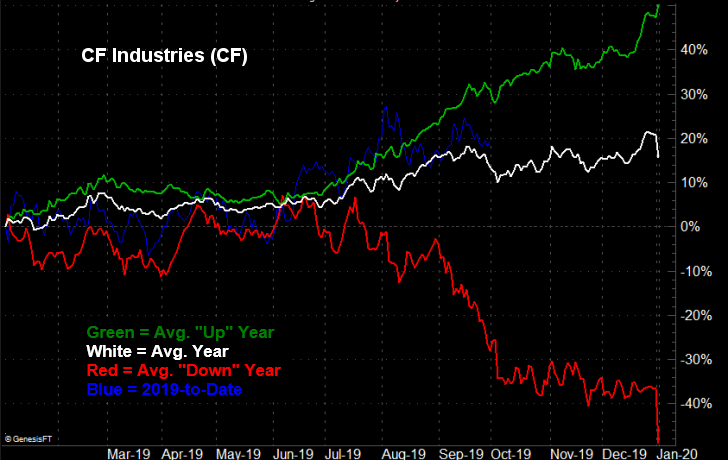 Most calendar-based trends tend not to be reliable enough to fool around with; the ‘exception’ that proves the rule is seen almost as frequently as the so-called ‘norm’ itself.

The year-end bullishness that agricultural chemicals and even food agriculture stocks seem able to dish out is oddly reliable though, and fertilizer outfit CF Industries Holdings (NYSE:CF) isn’t an exception. Though the usual 5% advance it sees in October isn’t earth-shattering, it’s solid, and it’s usually a precursor to a nice bullish move spanning the entire fourth quarter.

CF is also one of those names that’s only recently pushed up and off some major long-term support levels, and now starting to move back toward the upper end of a long-term trading range. 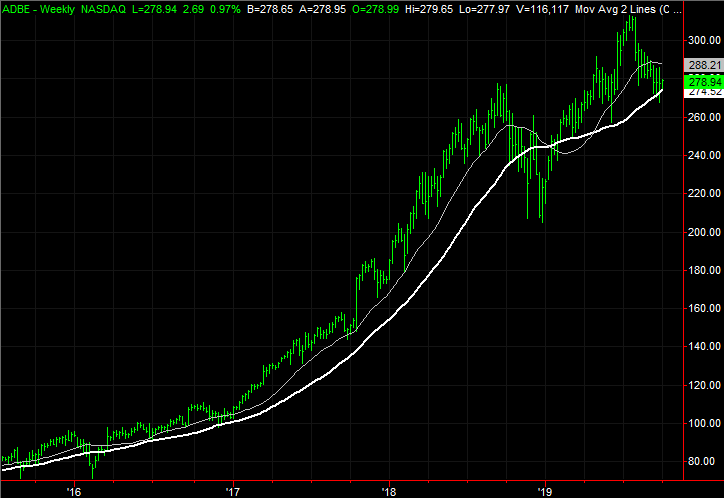 Adobe (NASDAQ:ADBE) is another one of those names that’s quietly dished out big-time gains while nobody was looking — or expecting those gains. All told, ADBE stock is up 170% since the end of 2016, and while down from July’s high, the pullback stopped and has started to reverse right where it needed to. That’s the 200-day moving average line, marked in white.

The prompt for the strength that took shape seemingly at a time when free alternatives to its wares are available is simple enough. Adobe has waded into cloud-based software waters, where subscription-based access means revenue is recurring. And, the company isn’t just PDFs and image management anymore. Its Creative Cloud and Experience Cloud platforms are robust business-building tools its clients can use to grow their top and bottom lines.

The formula is working. Revenue is on pace to improve a little more than 23% this year, and though slower, next year’s projected top-line growth of nearly 18% is s till impressive. 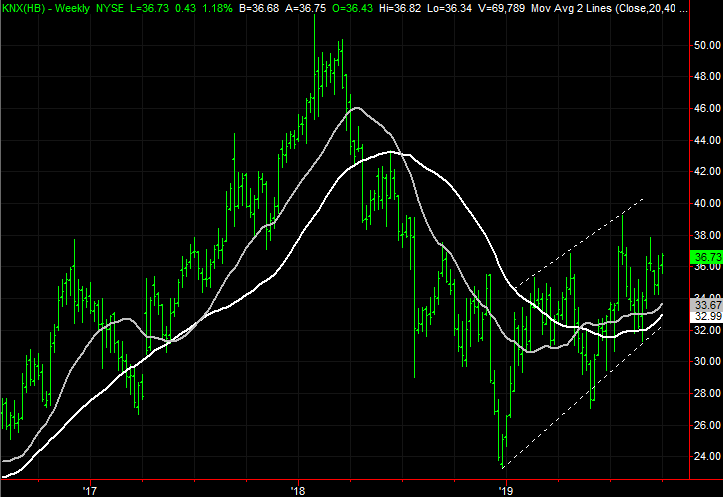 Last year was a rather miserable one for trucking outfit Knight-Swift Transportation (NYSE:KNX), and its shareholders. From its high to its low, KNX stock fell more than 50%, largely on fears that new tariffs would crimp demand for delivery services.

Now Knight-Swift is shaping up as stocks to buy as we move into October and beyond because — Surprise! — the worst-case scenario was never fully realized. And it may never be. Although the company’s top and bottom line ran into a headwind, the American Trucking Association says total tonnage of goods being ferried about as of July was at record levels. August’s tally fell 3.2%, but was still up 4.3% year-over-year.

In short, the trucking business is fine. Better still, the rebound from last year’s lull is firming up nicely, marked by a discernible streak of higher lows and higher highs. 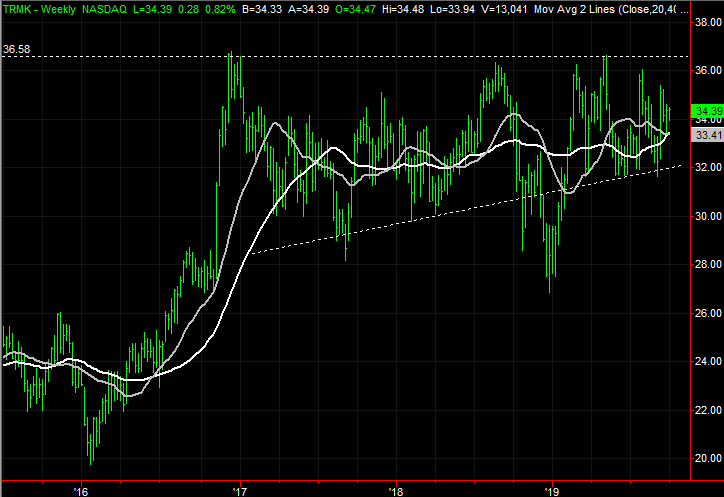 Shares of regional bank Trustmark (NASDAQ:TRMK) have gone nowhere since late-2016 … at least on a net basis. They’ve been well above and well below their current value of $34.50, but on balance have remained stuck in the mud even when other banking stocks have performed well.

There may be a proverbial method to the madness, though, that could make TRMK one of the best stocks for October. The whole time, Trustmark has been squeezed into a narrowing range. That primes the pump for a breakout move fueled by the sudden unleashing of pent-up buying.

Bonus: If nothing else, the consistent dividend and current yield of 2.7% will be viewed as a safe-haven in a fairly uncertain environment. 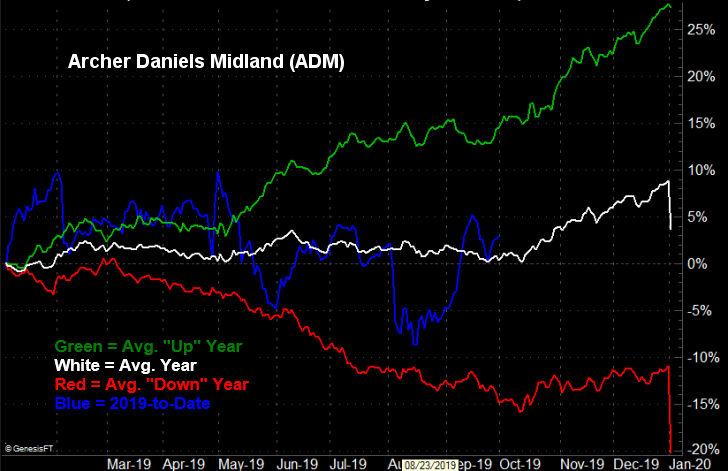 As was noted, the last quarter of the year tends to be a good one for agricultural chemical stocks like the aforementioned CF Industries. As was also explained, however, food-crop outfits also rally hand-in-hand with fertilizer companies.

Case in point: Archer Daniels Midland (NYSE:ADM), on average, advances a little more than 3% in October as part of a 9% gain for the three-month stretch in question. In a good year, ADM stock can dish out a 14% gain. It’s not been a star performer this year, but that’s all the more reason it qualifies as one of the top stocks to buy here. This tepid performance is the norm, leaving room for a year-end rally to materialize.

Fundamentals, and even the economic backdrop, seem to have very little to do with this calendar-based tendency. 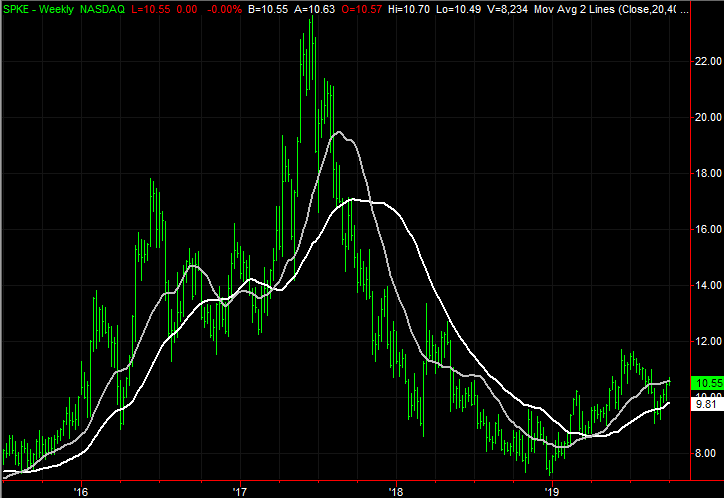 With a market cap of only $370 million, Spark Energy (NASDAQ:SPKE) doesn’t turn a lot of heads. And given the stock’s 70% rout between its mid-2017 high and late-2018 low, a swath of would-be investors have been understandably spooked.

Don’t let the big selloff or small size fool you though. This independent energy wholesaler packs some punch. Savvy investments in its own growth are starting to work out, and better still, investors are starting to see it. SPKE stock made a hard pivot out of a downtrend early this year and has since logged a streak of higher lows and higher highs. The bulk of what was lost in the 70% selloff, however, has yet to be reclaimed.

The kicker: The yield of 7.8% is a key selling feature in the current environment, which is tainted by uncertainty. 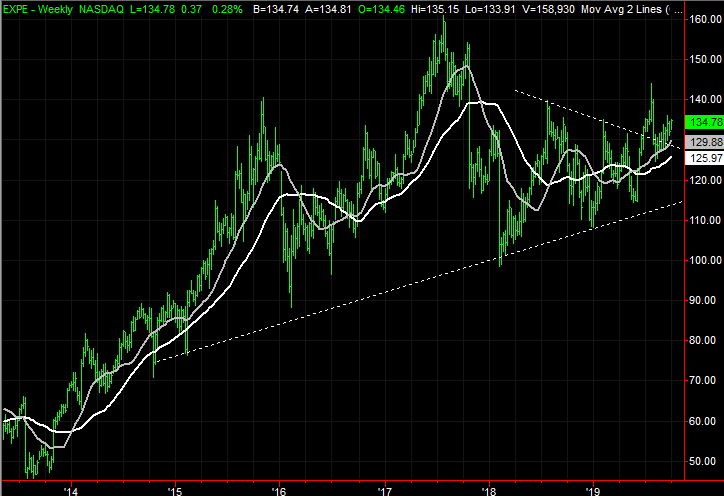 It’s an inherently volatile name, but if you can stomach the swings and unpredictable action Expedia Group (NASDAQ:EXPE) shares dish out on a regular basis, EXPE could make for a nice trade at this time.

The underlying fundamentals certainly support the idea. This year’s forecasted sales growth of 8.3% should be topped by next year’s expected revenue growth of 9.5%, while this year’s per-share earnings projection of $6.95 is leaps and bounds better than last year’s $5.82. Forecasted earnings of $8.16 per share for 2020 would be a 17% improvement.

The more compelling argument in favor of buying EXPE stock right now, however, lies in the fact that shares just broke back above a falling resistance line thanks to support from an even longer-term technical floor. 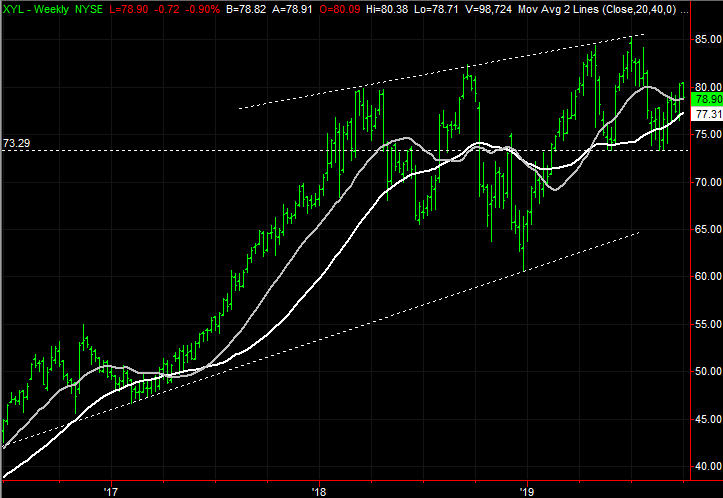 Finally, add water-management name Xylem (NYSE:XYL) to your list of best stocks to buy for October.

Yes, it’s riding the same underlying wave Tetra Tech is, and is another one of the reasons the Powershares Water Resource Portfolio has been such a solid performer. Though it’s not been a consistent stock this year (or last), XYL is no stranger to big moves like we saw in 2016 and 2017. The sideways gyrations seen this year and last, in fact, are what make XYL so interesting here and now. It looks like shares are trying to work their way out of that technical rut.

The company’s certainly doing its part. This year’s projected sales growth of 3% isn’t jaw-dropping, and next year’s expected top-line growth of 5% isn’t a whole lot better. What Xylem lacks in firepower it makes up for in reliability though, particularly when it comes to the bottom line.