Ulta Beauty (Nasdaq: ULTA) – is a retailer of beauty products in the United States. The company offers cosmetics, fragrances, haircare products, and skincare products. Stores also offer salon services including hair, skin, makeup, and brow services. At the end of June, the company had 1,213 stores that it operated. Ulta Beauty is headquartered in Bolingbrook, Illinois and was founded in 1990.

As for the management efficiency measurements, the return on equity is at 36.3% while the profit margin is at 12.8%.

The ROE reading is well above average while the profit margin is in the average range.

It is also worth mentioning that the company doesn’t have any long-term debt.

Sentiment toward Ulta Beauty shows that there are 21 analysts covering the stock with 12 “buy” ratings and nine “hold” ratings.

The short interest ratio has fallen from 4.46 to 1.16 in the last month, but that is because the average daily trading volume has jumped from 756K shares per day to 2.6 million shares per day. If the big drop in the ratio was due to a big decline in the number of shares sold short, that would be a sign of increased optimism. In this case, I think the sentiment has remained constant while the stock has become more actively traded. 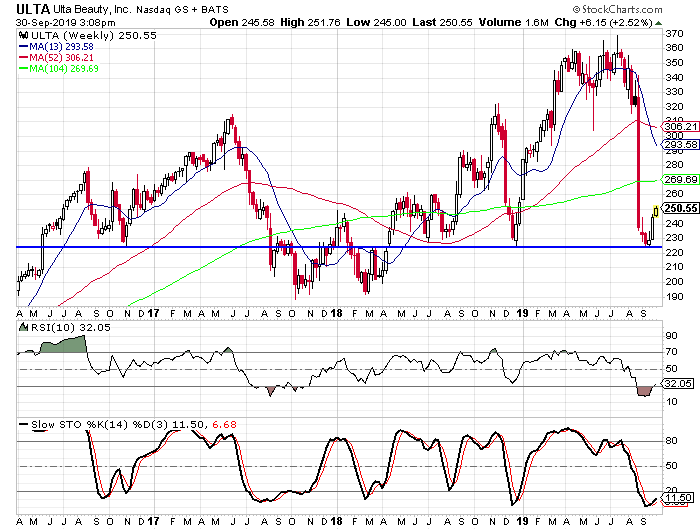 One of the reasons for the big jump in trading volume is the big decline in August. When the company reported earnings on August 29, it missed on the EPS estimates and the stock fell sharply as over 16 million shares traded hands. The stock continued lower for another few weeks, but I think the selloff was overdone.

We see that the low was right in the $225 area and that was also the low back in December of last year. The fact that the stock found support there is encouraging. It is also encouraging that the overbought/oversold indicators reached oversold territory and have since reversed course.

The 10-week RSI fell to its lowest level in the last three and a half years and has now moved out of oversold territory. The weekly stochastic readings hit oversold territory and have now made a bullish crossover. I find both of these indicators encouraging and I look for the stock to rally in the coming months.