You can’t turn on the TV without seeing something you’re supposed to be mad about. Everybody’s angry about something. And they want you to be angry about it, too.

And don’t forget, things have never been worse for you. Yes, you, personally.

The American consumer, we’re told, is facing the worst beatdown we’ve seen in living memory. And any hope and optimism we might be feeling is fueled by debt.

Jeez… Can everything really be that bad?

Of course not. And the debt narrative in particular is one the “scare media” has dead wrong.

Is right now really the worst time in history for the American consumer? My guess is you know the answer intuitively. It’s not.

I remember, not so long ago, when only fancy people had big-screen TVs in their homes. You know – those massive tube TVs, with the speakers built in. They cost a ton. They were a luxury.

Now, don’t get me wrong. I know there are a lot of problems in the world. And there are people out there who haven’t gotten a fair shake. But the reality is that as a whole, we’re doing better than ever.

I know the big objection to this idea. It goes something like this…

“Sure, all this amazing tech is cheap today. But most folks aren’t paying in cash. It’s all paid for with a mountain of debt.”

That’s the narrative as the scare media sees it… “Consumers are drowning in debt.”

The media has some pretty good numbers to back this up, too. You’ve probably heard debt levels are at all-time highs. And that’s true. Take a look… 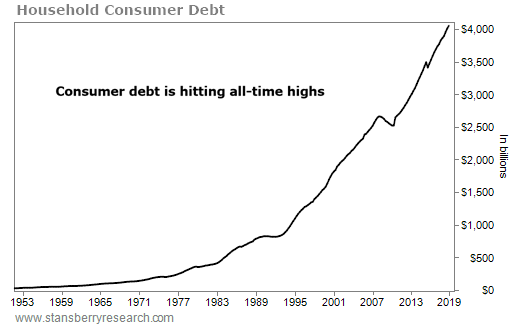 U.S. consumers have more debt today than at any other time in history… So the logic goes, we must be drowning in it.

It’s true that debt has blown past $4 trillion, an enormous figure. And it’s OK if that produces a knee-jerk reaction in you. Being overloaded with debt is scary.

It pushes families over the edge. It can be the precursor to homelessness. For a household, too much debt is bad news. But we need to stop and ask ourselves, what does “too much” mean?

I think you know this one intuitively, too. A consumer has too much debt when he’s at risk of not being able to make payments on it.

That’s pretty basic. The first rule of taking on a loan is that you have to make payments on it. If you don’t, you’re in default. And that’s never a position you want to be in.

So, to measure how overextended the general public is when it comes to payments… we need to know how much “wiggle room” folks have. 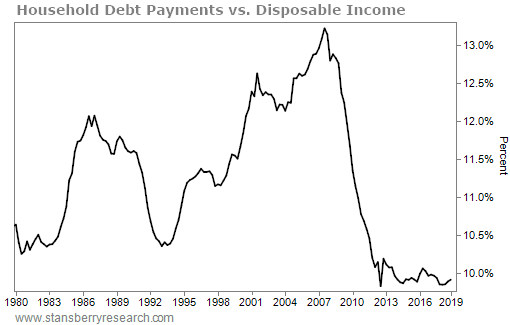 This is how much households spend on debt payments as a percent of disposable income. And it’s the exact number we want to look at.

That’s because disposable income is the amount of wiggle room a consumer has after his other bills have been paid. And when disposable income drops to zero, you know that consumers are teetering on the edge of disaster.

So the chart above might surprise you… As you can see, consumer spending on debt payments is near all-time lows. Right now, consumers spend less than 10% of their disposable income on debt.

Simply put, Americans have more debt than ever. But they’re also spending less on it than ever.

Interest rates have been very, very low for more than a decade now. And American consumers are smarter than the media will admit.

They’re using the low rates, which are synonymous with cheap debt, to achieve a higher standard of living. And compared to times past, they’re spending less of their disposable income to do it.

This is just another example of how the scare media gets it wrong. They want you to believe that the world is falling apart… Fear sells.

The reality is, despite all our problems, things are going pretty well. And when it comes to consumers drowning in debt, well, the water level isn’t as high as you’d think.