Altair Engineering (Nasdaq: ALTR) – is an infrastructure software company based in Troy, Michigan. The company provides software and cloud solutions to customers worldwide. The company offers products in the areas of design, modeling, physics simulation, data intelligence, energy management and exploration, and financial services. Altair Engineering was founded in 1985.

Looking at Altair’s fundamentals we see really strong earnings growth in the last few years. The EPS has increased by an average of 75% annually over the last three years and they increased by 100% in the most recent quarterly report.

Sales have also been growing, but not as fast as earnings.

Sales have increased by an average of 14% per year for the last three years and they increased by 14% in the most recent quarter.

The company’s management efficiency measurements are average to better than average.

The return on equity is at 21.8% and that is above average.

The profit margin is at 13.2% and that is in the average range.

Sentiment toward Altair Engineering was one of the attractions for me.

There are only eight analysts covering the stock at this time with three “buy” ratings, four “hold” ratings, and one “sell” rating. Not only is the analyst coverage low, but the buy percentage is only 37.5%. This leaves plenty of room for additional coverage and for upgrades.

The short interest ratio is also showing some negative sentiment toward the stock with a current reading of 7.0. That ratio is well above average and given the company’s fundamental position, it seems unwarranted. 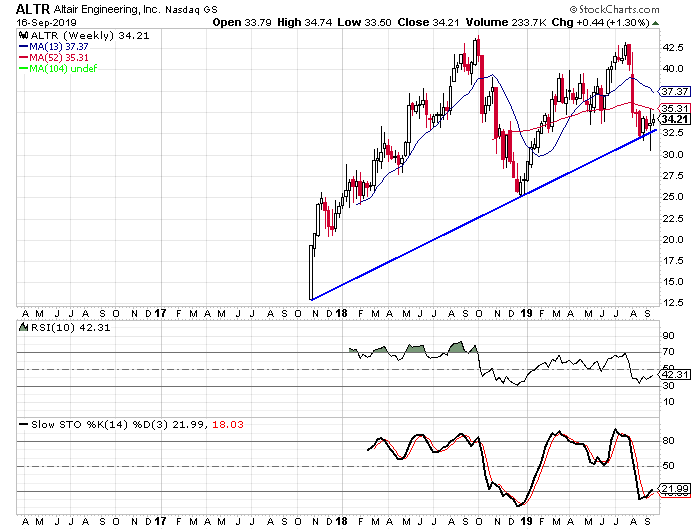 We see on the weekly chart that Altair Engineering didn’t start trading publicly until the fall of 2017. After going public, the stock moved straight up for almost a year, but then pulled back in the fourth quarter as the overall market got hit with selling. If we connect the initial price with the low from December, we get an upward sloped trend line and the stock is trading just above that trend line at this time.

Looking at the weekly stochastic readings, the indicators were in oversold territory and just made a bullish crossover. We saw a similar development at the end of December and the stock gained approximately 70% in the next seven months after that bullish crossover.