Air Lease (NYSE: AL) – as the name implies, Air Lease is engaged in the purchasing and leasing of commercial aircraft. The company was founded in 2010 and is headquartered in Los Angeles, California. At the end of 2018, the company owned a fleet of 275 aircraft—207 narrow-body jets and 68 wide-body jets.

Air Lease has seen its earnings grow by 17% per year over the last three years and they were up 6% in the most recent quarterly report. Analysts expect earnings to grow by 16% for the year as a whole.

Sales have increased at a rate of 10% per year over the last three years and they were up by 18% in the latest earnings report.

In addition to the earnings and sales growth, the management efficiency measurements for Air Lease are above average.

The sentiment indicators for Air Lease are somewhat mixed.

There are 12 analysts following the stock and 11 of them have the stock rated as a “buy”.

There is also one “hold” rating. The overall buy percentage is higher than the average stock, but there are only 12 analysts covering the stock and that seems low.

The short interest ratio for the stock is particularly interesting because it is at 9.1 right now. This is an extremely bearish reading and as a contrarian that is the kind of thing you want to see. If the stock continues to rally, the short sellers can add buying pressure to the stock when they try to close out their positions. 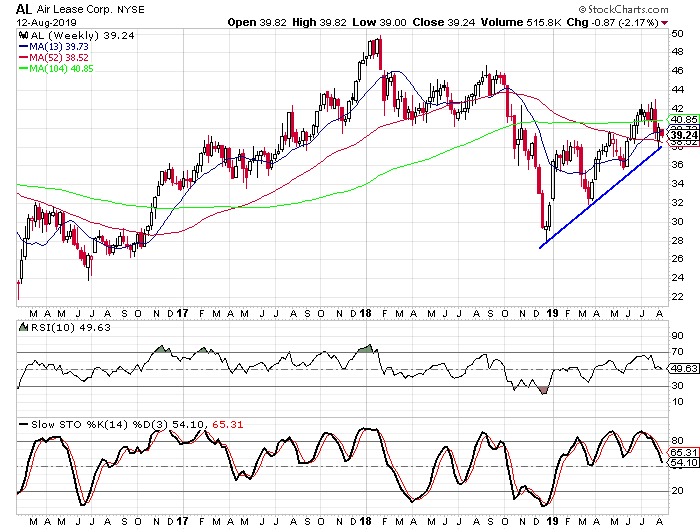 Looking at the chart for Air Lease we see that a trend line has formed that connects the lows from the last eight months. The low from December connects with the low from March and the stock just hit that trend line in the past week. The 52-week moving average is in the same area as this trend line and could act as a second layer of support for the stock.

The overbought/oversold indicators both tell a story as well. We see that the pattern on the 10-week RSI shows a series of higher lows since the low in December. As for the stochastic readings, they are close to the 50 level and the indicators haven’t been below that level since January.