Living off of dividends.

For some, a dream.

A reality for others.

How can you go from dream to reality?

You simply have to live below your means and invest your excess capital into high-quality dividend growth stocks.

I assure you, though, it’s more difficult than it sounds.

After all, most people would rather spend their money on just about anything other than stocks.

But if you can resist that, and go against the herd, an amazing result could be waiting for you.

I even lay out in step-by-step fashion how you can make this dream a reality, in my Early Retirement Blueprint.

I followed every step in that Blueprint myself.

Following those steps allowed me to build the FIRE Fund.

It generates the five-figure passive dividend income I live off of.

Being in this position required two major actions on my part.

I lived below my means.

And I invested my excess capital into high-quality dividend growth stocks like those you’ll find on the Dividend Champions, Contenders, and Challengers list.

It’s vital to perform a full analysis on any business before you invest.

Stocks are slivers of real businesses, and you should approach buying stocks in a businessman-like way.

That’s because the valuation you invest at could dramatically affect the performance of your investment.

That’s relative to what the same stock might otherwise offer if it were fairly valued or overvalued.

All else equal, because price and yield are inversely correlated, a lower price results in a higher yield. 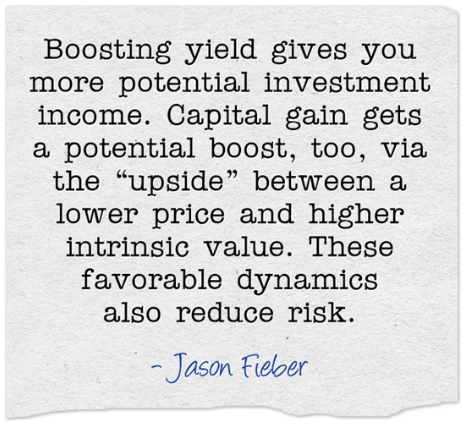 Total return is, after all, the sum of investment income and capital gain.

Capital gain gets a potential boost, too, via the “upside” between a lower price and higher intrinsic value.

That’s a “buffer” that protects the investors downside against unforeseen issues.

Fortunately, undervaluation is not impossible to spot.

In fact, fellow contributor Dave Van Knapp has made it easier than ever to value stocks.

Some of their major platforms include the Stryker combat vehicle, Abrams tank, the Virginia-class nuclear-powered submarine, Gulfstream business jet. In addition, they offer a suite of IT services.

Revenue for FY 2018 breaks down geographically as follows: 65%, US government, 21% international defense and commercial, and 14% US commercial.

I’ve always thought of General Dynamics as 75% defense contractor (to include their IT offerings), 25% corporate jet manufacturer.

When you look at the sales breakdown, that’s what you’re getting here.

And that offers a bit of a best-of-both-worlds scenario.

That’s because you get the defensive nature of defense – US defense spending regularly grows year in and year out, and it’s a fairly recession-proof business model.

After all, a country doesn’t need less defense in times of economic struggle. If anything, it could need more.

On the other hand, General Dynamics isn’t as reliant on the US government as many of its major peers are.

General Dynamics has some diversification, through exposure to commercial markets that the Gulfstream business entails.

This offers the company the ability to stabilize itself when US budgetary crises or DoD spending pressures enter the picture.

And since there’s limited competition both in defense and corporate jets, along with sizable barriers to entry to all of their business lines, the company’s competitive position is enviable.

This puts the dividend in an enviable position, too.

As it sits, the company has increased its dividend for 28 consecutive years.

And that number has been remarkably consistent. No marked deceleration – even the most recent increase came in at almost 10%.

With a well-managed payout ratio of 36.3%, the dividend is an excellent position to continue growing for years to come.

The stock even yields a competitive 2.26% right now.

That sure beats the broader market. And it’s almost 40 basis points higher than the stock’s own five-year average yield.

The dividend metrics are fantastic. Checks pretty much all of the boxes.

But we invest in where a company is going, not where it’s been.

It’s those future dividend increases that investors care most about.

I’m now going to provide you with a good look at the company’s overall growth trajectory, which should tell us a lot about where the dividend might go.

I’ll first show you what kind of top-line and bottom-line growth General Dynamics has managed over the last decade.

And then I’ll compare that to a near-term professional forecast for profit growth.

Combining the known past and estimated future in this manner should allow us to extrapolate out the company’s growth in an educated manner.

So revenue is basically flat.

That’s because the recent spike in revenue that popped up in FY 2018 was due to the $9.6 billion recent acquisition of IT contractor CSRA, which turned General Dynamics into the largest provider of IT services to the US government.

But as the future of warfare increasingly looks more digital, with battles playing out over networks instead of battlefields, it’s imperative that these defense contractors provide a full suite of tech services.

Bottom-line growth has been more impressive, thanks to a combination of margin expansion and buybacks.

Buybacks have been particularly helpful. The outstanding share count is down by almost 23% over the last decade.

Looking forward, CFRA is predicting that General Dynamics will compound its EPS at an annual rate of 6% over the next three years.

That’s clearly a call for a continuation of the status quo.

CFRA is offsetting high defense spending, buybacks, and improved execution against margin pressures, global economic concerns, and a balance sheet that has been stretched of late.

I think this is a reasonable call, if a bit conservative.

There doesn’t appear to be anything in the business that would warrant a major acceleration or deceleration in overall growth.

General Dynamics won’t knock your socks off with a high growth rate.

It’s instead a very solid business that executes consistently well.

But even with a ~6% EPS growth rate, the dividend could easily grow at a high-single-digit pace.

I don’t think it would be crazy to expect annual 8% dividend increases for the foreseeable future.

A slight disconnect between the two growth rates could carry on for a number of years to come due to the payout ratio being so low. And I think there’s room for General Dynamics to do better than 6% EPS growth.

I wouldn’t want to see a massive disconnect between EPS and dividend growth, but a difference of 200 basis points or so wouldn’t be difficult at all to sustain for many years into the future.

And that’s assuming that General Dynamics can’t do better than 6% on the bottom line.

With a funded backlog of $54.4 billion, the company has no shortage of work. That’s for sure.

Moving over to the balance sheet, the company has historically managed its financial position incredibly well. It used to have a fortress balance sheet.

But that conservative nature has given way of late, largely due to the aforementioned CSRA acquisition.

The balance sheet is by no means in trouble. But it’s not as stellar as it once was.

There’s been some deterioration here as the company sought out growth in exchange for debt. The CSRA acquisition is expected to be accretive, so shareholders will have to see how this plays out.

Still, the company is in a very good financial position. Even after the deterioration.

The long-term debt/equity ratio is 0.98, while the interest coverage ratio is at ~12.

I will say that treasury stock has artificially lowered common equity, so the long-term debt/equity ratio looks higher than it really is.

Profitability is definitely a bright spot. Margins are strong, and they’ve been expanding.

Over the last five years, the company has averaged annual net margin of 9.14% and annual return on equity of 25.52%.

Both numbers are remarkable when looking at them through the lens of the industry. The largest competitor in the industry, Lockheed Martin Corporation (LMT), has struggled to average net margin above 8% over the last five years.

Overall, I think there’s certainly a lot to like about General Dynamics.

And the large exposure to commercial markets that are a bit less sensitive to economic cycles creates a nice ballast against the reliance on the US government that is common in this industry.

Of course, there are risks.

While General Dynamics has smartly diversified itself, it’s still extremely sensitive to any changes in the US DoD budget.

In addition, they’re exposed to broader economic cycles with their commercial lines.

And the balance sheet, while still very good, has sharply deteriorated recently.

At the right valuation, though, this could be an excellent long-term investment.

Well, the valuation appears to be compelling right now…

That’s well below the broader market’s earnings multiple. It’s also below the stock’s own five-year average P/E ratio of 17.8.

And the yield, as noted earlier, is noticeably higher than its recent historical average.

So the stock does look cheap. But how cheap might it be? What would a reasonable estimate of intrinsic value look like?

I factored in a 10% discount rate and an 8% long-term dividend growth rate.

Admittedly, that DGR is on the upper end of what I ordinarily allow for.

But the payout ratio is very low, and the company has been handing out dividend increases much higher than this for the last decade.

I simply don’t see anything on the horizon that would portend a sudden, substantial slowing of dividend growth.

If anything, the dividend is set to grow at a rate slightly higher than this, at least for the next few years.

But I’d rather err on the side of caution, especially when looking at the long term.

I don’t think my analysis was at all aggressive, yet the stock still looks quite undervalued.

Averaging out the three numbers gives us a final valuation of $209.11. That would indicate the stock is possibly 16% undervalued.

Bottom line: General Dynamics Corporation (GD) is a high-quality company with scaled and entrenched business lines that have very limited competition. Excellent fundamentals, a market-beating yield, a very low payout ratio, almost three decades of dividend increases, a double-digit long-term dividend growth rate, and the potential that shares are 16% undervalued are all great reasons why dividend growth investors should take a close look at this stock right now.