Dave & Buster’s Entertainment (Nasdaq: PLAY) – Dave & Buster’s is a chain of entertainment and dining venues throughout the United States. The venues offer traditional bar games such as pool and darts, but they also have huge video game arcades within the facility.

The company has 128 locations currently and they have plans to open 12 or 13 more locations over the next few years. The company is headquartered in Dallas, Texas and was founded in 1982.

The company has performed relatively well in recent years, growing earnings by an average of 19% per year over the last three years and by 9% in the most recent quarter.

Sales have increased at a rate of 13% per year in the last three years and were up 9% in the most recent quarterly report.

The ROE is above average and the profit margin is in the average range.

The sentiment toward Dave & Buster’s is pretty bearish considering the solid fundamental readings.

The short interest ratio is at 4.8 and the number of shares sold short has been climbing over the last few reporting periods. There are 12 analysts following the stock currently and seven of them have the stock rated as a “buy” while five have it rated as a “hold”. 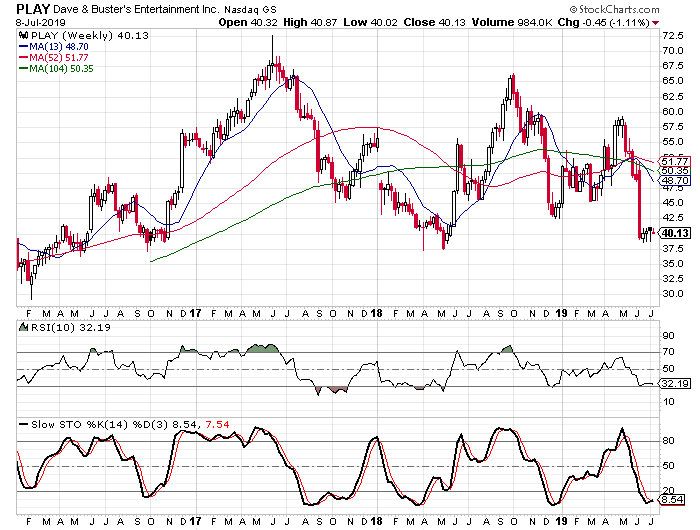 The weekly chart for Dave & Buster’s shows a big decline in June and that was related to its earnings report. The stock has stabilized in the $37.50 to $40 range. The stock saw the same area act as support back in the spring of 2018 as well.

The weekly stochastic readings dropped in to oversold territory after the earnings report and have now made a bullish crossover. We see that similar moves in the last few years have preceded rallies in the stock.