iRobot (Nasdaq: IRBT) – iRobot builds and sells robots for consumer use. The company is probably best known for its robotic vacuum Roomba, but it also offers automatic floor mopping robots as well as robotic pool cleaners. The company was founded in 1990 and is headquartered in Bedford, Massachusetts.

iRobot has seen its earnings grow by an average of 32% per year over the last three years while sales have grown at a rate of 24% during the same time period. Earnings did decline by 8% in the first quarter and that is on a year over year basis.

Analysts expect earnings to grow at a rate of 18% per year over the next five years.

The management efficiency ratings for iRobot are solid for a growth oriented stock.

It is also worth noting that the company doesn’t have any long term debt.

One of the biggest attractions to the stock is the pessimistic sentiment readings.

There are nine analysts following the stock and eight of the nine have the stock rated as a “hold”.

There is only one “buy” rating on the stock at this time.

The company also shows extreme pessimism from the short selling crowd with a short interest ratio of 19.4. There are 8.5 million shares sold short and the average daily trading volume is just under 500K shares per day. The current short interest ratio is the highest reading of the past year. 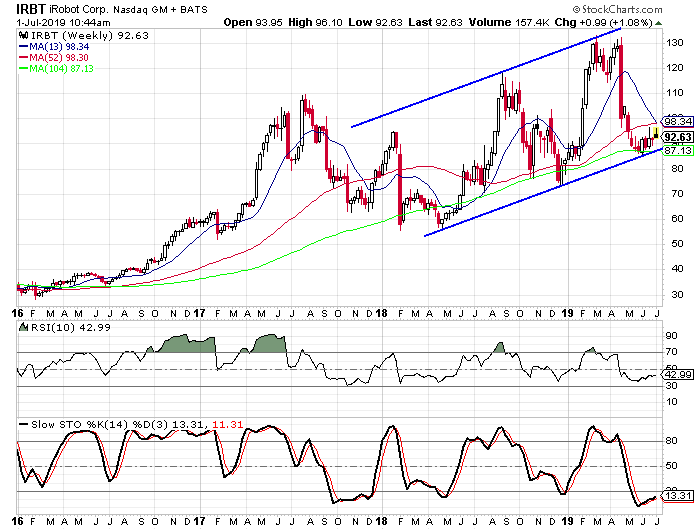 We see on the chart that iRobot has been trending higher for several years, but what really stands out is the trend channel that has formed over the last year and a half. We see that the lows from the second quarter of 2018 connect with the low from December to form the lower rail and the parallel upper rail connects the highs from the Q3 ’18 and the high from February.

With the stock hovering near the lower rail of the channel and with the weekly stochastic readings in oversold territory, it looks like an excellent buying opportunity at this time.