VMware (NYSE: VMW) – VMware Inc. is a software company based in Palo Alto, California. The company provides a range of software products that range from multi-cloud, hybrid cloud, networking and security, and digital workspaces.

The products are offered globally through a network of distributors, resellers, system vendors, and systems integrators. The company was founded in 1998 and it is a subsidiary of Dell Technologies.

The company has incredible management efficiency ratings with a return on equity of 57.2% and a profit margin of 34.8%.

VMware has seen earnings grow at a rate of 18% per year over the last three years while revenue has grown by 12% per year during that same period.

Analysts expect revenue to grow by 12% per year over the next five years.

The most recent quarterly report showed earnings growth of 5% on revenue growth of 13%.

Despite the solid fundamental performance, the sentiment toward the stock is far from bullish.

There are 32 analysts covering the stock currently with 16 “buy” ratings, 13 “hold” ratings, and three “sell” ratings. I have mentioned the buy percentage before and how the average is in the range of 65% to 75% for companies with good fundamentals. For VMware we are looking at a buy percentage of 50%.

The short interest ratio is also showing signs of pessimism with a current reading of 4.2. 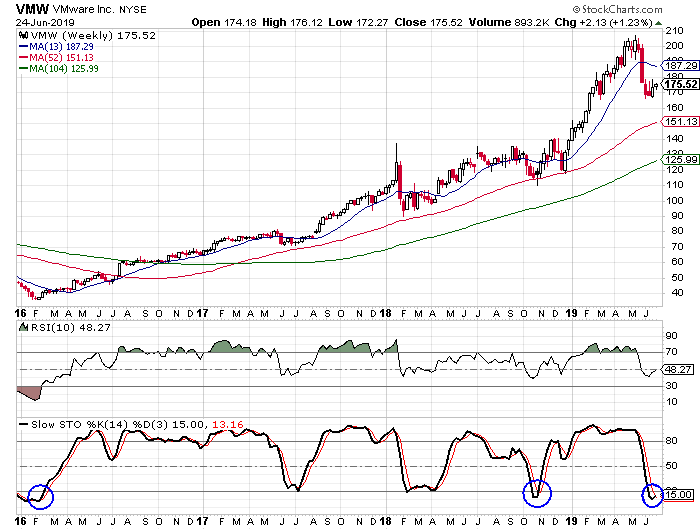 I like the fact that the stock pulled back and put the stock in overbought territory, but it did it without the stock falling below its long-term moving averages.