I find exercise to be therapeutic. It’s my favorite way to release stress.

And given the back-and-forth around U.S.-China trade negotiations and the uncertainties relative to the global growth outlook, this market environment is as frustrating as I’ve ever seen.

Consequently, I have plenty of pent-up energy motivating me to exercise at the moment. Unfortunately for my bike, it’s bearing the brunt of those frustrations!

The current market environment reminds me a lot of the uncertainty around the 2000 presidential race between George W. Bush and Al Gore – the infamous “hanging chad” incident.

We can learn a lot from looking back at that time.

So today, I’ll discuss the real meaning of the uncertainty tossing around in the markets – then and now. And I’ll share the secret weapon that will get you through it.

The 2000 election was famously close…

At the time, everyone was watching Florida. It would be the deciding state. However, the margin of victory was so narrow – 1,784 votes – that under Florida law, it required an automatic recount.

Suddenly, it was all anyone could talk about both on Wall Street and in the media. The outcome would have huge consequences for corporate America and the economy.

On Wall Street, it’s not always about the facts. As they love to say, “Perception is reality.”

So, the election hang-up was an issue for money managers. Their decision process was banking on the potential for future earnings. If a perceived pro-business president were to enter the White House, margin and earnings estimates would go up… making the case for a rising market and higher valuations. And high-flying sectors like technology would be the best way to play the trend.

Conversely, if a perceived anti-business president were to enter the White House, estimates would need to come down. This would also hurt margins while making the case for lower valuations in a less growth-oriented environment. Defensive stocks would be the better way to play that trend.

But, until money managers knew how to invest, they were effectively paralyzed into doing nothing.

This began on election day: November 7, 2000. It wasn’t until 36 days after election night that Gore finally conceded the election to Bush, who had won by a total of 537 votes.

For Wall Street and the investment community, it seemed like an eternity. In that one-month span, the S&P 500 Index fell more than 8% at one point. 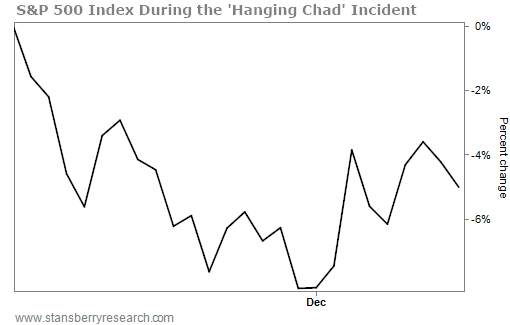 No one knew what was going to happen. Investors and money managers sought the safety of the sidelines and saved their money for a rainy day rather than invest in an uncertain future.

That brings me back to the present… While the time frame is different, the events of 2000 remind me strongly of the China-U.S. trade negotiations.

The outcome is uncertain. And again, the growth outlook is what’s at stake. A successful trade deal would put the growth picture back on track, making sectors like technology and retail much more attractive investment opportunities. And if the talks fall apart, you’re going to want to be positioned defensively.

The investment community hates uncertainty. Since President Donald Trump’s tweets last month promising higher tariffs, the S&P 500 dropped roughly 7% at its lowest point. We’re likely going to get more of the same until we get some clarity.

The good news is, that clarity could happen soon, with President Trump and China’s President Xi Jinping due to sit down at the G20 Leaders’ Summit at the end of June.

If so, the uncertainty we’re seeing now could be a buying opportunity. As my colleague Steve Sjuggerud wrote on Wednesday…

The renewed trade war has spooked mom-and-pop investors and professionals alike. No one knows what to think… or what to expect next.

That negative sentiment is powerful. But again, stocks are only 7% below all-time highs. This means we have a major opportunity… When the fear blows over, prices should reverse in a big way.

So what does this mean for investors? My personal advice is, continue to be patient. It’s not worth bailing out because we still don’t know how things are going to play out. At the same time, it’s not worth rushing headlong into the deep end of the pool.

Stay disciplined. Use careful position sizing to your advantage, and scale into your China investments. You don’t need to take big risks to bet on a turnaround.

And of course, find time to blow off steam and keep sane. Because once this is all sorted out, no matter what the outcome, the environment is going to become clearer and less volatile.

As for my bike… I actually wore it out. For me, it was like losing my best friend. So I shipped it out to a carbon fiber repair shop in Portland, Oregon. I’m waiting to hear back and hoping for a good report.

On the plus side, I now own a Specialized Tarmac. It has disc brakes and electronic shifting – I don’t know how I got along without them. And there’s a possibility I may still wind up with two great bikes.

It just goes to show what a little patience can do…