I feel like I’ve written it a hundred times over the past few years.

It tends to come up when I’m talking about China. Because China – today – is the most perfect example of this I’ve ever seen.

So while I feel like a broken record, I’ll repeat myself again today…

You make the most money investing in situations where perception doesn’t match reality.

I love this because it’s a simple, yet powerful idea. If everyone believes something, but they’re dead wrong, that’s an opportunity. That’s where you can make a lot of money.

In 2009, everyone thought stocks were toast. They’d seen the crisis unfold and lost their shirts. It led to a generation of investors giving up on the market.

The perception was that you couldn’t make money in stocks. But the reality was the opposite… It was the best buying opportunity in decades.

Today, we have a similar opportunity in China.

Chinese stocks are currently offering the best value I’ve seen in my career. Perception says you can’t make money on Chinese investments… but reality says quite the opposite.

One way to see people’s perception of a market is to look at valuations.

If folks are optimistic about the future, they bid up valuations. For example, back in 2000, investors thought the world was forever changing. They thought the Internet had changed capitalism as we knew it, and that rationalized sky-high prices.

Perception was way too good for reality back then. And anyone who bought into the idea took a beating.

I’m not exaggerating. The discount has never been this extreme in modern history. And that negative perception shows huge opportunity.

You can see this crazy situation through two tried-and-true valuation metrics… the price-to-book value (P/BV) and the price-to-sales (P/S) ratio. These give us the tools to answer two important questions.

The first one is, “Are Chinese companies overvalued based on their assets?”

And the second one is, “Are Chinese companies overvalued based on their sales?”

In each case, I compared China’s valuation to the U.S.’s valuation over time. Then I combined those two measures to come up with a simple chart. Take a look… 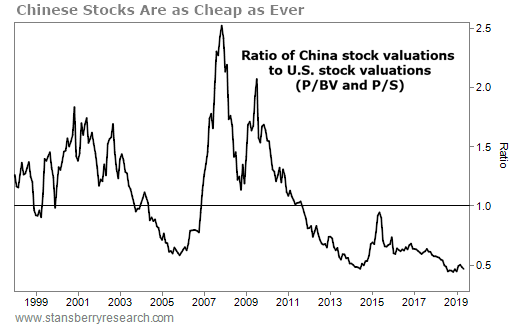 There’s a lot going on here. But the takeaway is simple…

Local Chinese stocks, based on assets and sales, are cheaper than they have ever been compared to U.S. stocks.

If you look at the chart more closely, you’ll see something even more incredible…

The current reading is around 0.5. That means that Chinese companies trade for around half the value of their comparable American counterparts. That’s amazing!

It’s a massive discount. It’s a quantified view of the negative perception surrounding China today. And it’s possible because of a flawed assumption… that Chinese companies are worth less simply because they’re in China.

Perception is way out of line with reality in this case. Investors have their heads buried in the sand… And they’ve priced Chinese stocks at an incredible discount as a result.

Importantly, discounts like this do not last. You can see from our valuation chart that this isn’t the norm… not even for China. It’s only a matter of time until Chinese stocks soar and the valuation spread closes.

Perception is out of line with reality in China today. That’s why we have a chance to make big money. And it’s why I continue to repeat myself… pounding the table on investing in China.

The Exodus to Florida (and Texas) is ON

Does Social Security Income Go On My 2019 Tax Return?

Upgrades and Downgrades for Friday, 1/24