There’s just no way your portfolio can be “all weather” without the financial equivalent of an umbrella. You must have one handy to protect your family’s hard-earned wealth.

Even more important, you must have one before a storm hits because downpours can come on more quickly than you might think… And once you and your portfolio are drenched, it’s already too late to take productive action.

Yesterday, I told you two ways to make your investing “umbrella” strong enough to withstand a market downturn.

Today, I’ll show you why the time to prepare is right now – before the trouble starts…

Why all this talk of protection when we’re doing so well?

Despite the recent trade-war turbulence in the markets, stocks are off to a terrific start in 2019. The S&P 500 Index just logged the best four-month start to the year in more than three decades.

So what’s the problem?

Put simply, there is too much debt, monetary stimulus, and fiscal stimulus artificially boosting economic growth and propping up an aging bull market. Let’s run through these one by one…

First, asset prices have gorged on huge amounts of monetary stimulus from the Federal Reserve. Fed policy has led to lower interest rates on U.S. Treasury securities. That forces savers and investors seeking yield into riskier assets (like stocks).

And after a brief stint of raising rates, the Fed has signaled a readiness to resume lowering rates again if the economy sputters. Stocks have soared on the news. 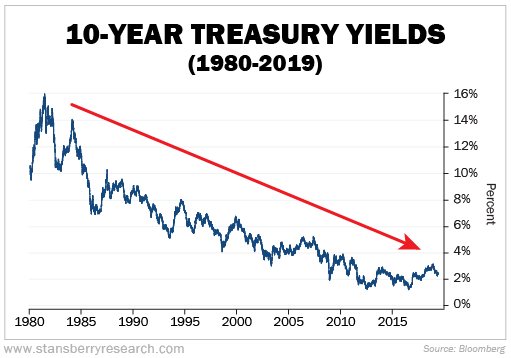 Not to be outdone, fiscal stimulus from the Trump regime is also pumping up asset prices. The U.S. government is aggressively spending more than it earns… And it will register another trillion-dollar deficit this year.

This kind of massive spending has historically been reserved for recessionary periods. The stock market is up nearly 40% since Trump’s election date.

Meanwhile, there’s more debt sloshing around the financial system than ever before.

The U.S. government owes more in debts than ever (as do governments in aggregate globally)… 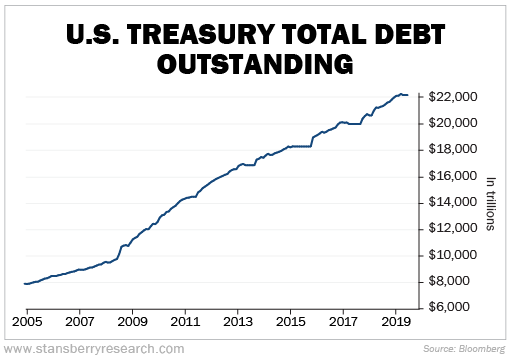 Corporate America is also more levered than ever…

While banks have prudently increased their capital reserves, every other major part of the economy has levered up materially. And rather than reinvesting in growing their businesses, corporations spent much of this new debt on share buybacks. Yet again, stocks have already enjoyed the benefit of this spending. 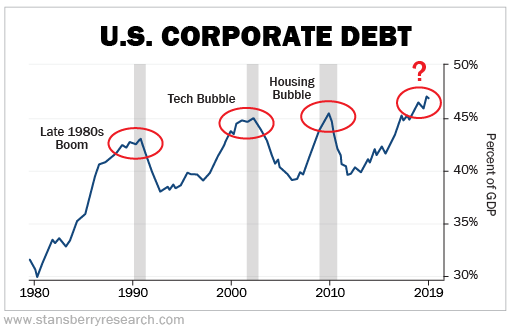 Consumers are also more indebted than ever. Home-related debts have not yet reached new highs. But all other major categories – such as auto, credit card, and student debts – have ballooned more than enough to make up for it. 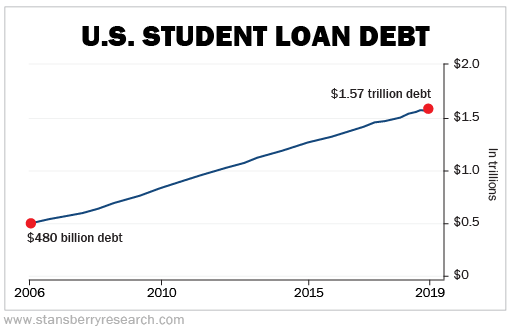 Finally, even investors are more levered than ever. The amount of margin debt is near an all-time high. Investors are borrowing record amounts of cash to put into their portfolios in a greedy thirst for higher returns. 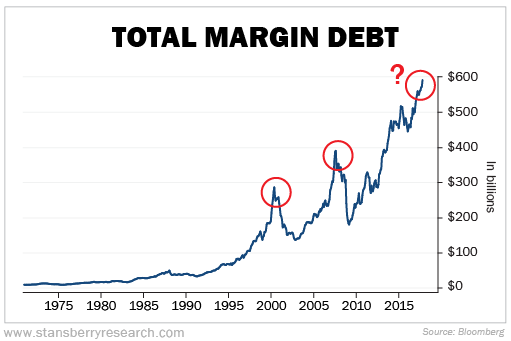 There is entirely too much debt sloshing around the system. This won’t end well.

Still, as scary as that list is, I have been guardedly positive on the short- to medium-term outlook for U.S. markets for one key reason: growth. As long as America keeps growing, asset prices can move higher and the financial train will stay on the tracks. And the White House and the Fed are both laser-focused on keeping the economic growth engines running.

But I’m becoming more concerned because… growth is already slowing.

In October, for the first time, economists lowered their outlook for global growth in 2019. Now, that slowdown is creeping into domestic data as well.

You might not be able to tell from the headlines. After all, U.S. GDP grew 3.2% in the first quarter of 2019. That’s higher than the fourth-quarter figures. But that number doesn’t tell the whole story…

By unpacking that headline figure a bit, we see that nearly two-thirds of that growth rate came from transitory fluctuations in net exports and inventory levels. Both could have just as easily represented drags on GDP growth (and likely will in the remainder of the year). Apart from those figures, domestic consumption grew by barely more than 1% on a real basis, which is a significant slowdown from core growth in 2018.

So we’re still growing, but at a slower rate… Where does that leave us?

Well, I believe now is the time to start pulling back a little bit on the investment throttle.

To be clear, you still want to be invested in stocks. In particular, you want to lean on world-class businesses with enduring franchises and attractive returns on investment. But this is not the time to solely own those stocks.

Downshift your risk a bit. Think about trimming some of your most aggressive investments. Tilt your allocation toward safer, sturdier assets. Own some gold. Begin to raise some cash and cash-like securities (like short-term U.S. Treasury bills).

In short, keep owning those blue-chip “forever” stocks… But from here, don’t go anywhere without bringing along that umbrella.

Is It Too Late to Buy the FAANG Stocks and Microsoft?

Up 258% Since its March Lows, This Stock’s Rally is Not Yet Over